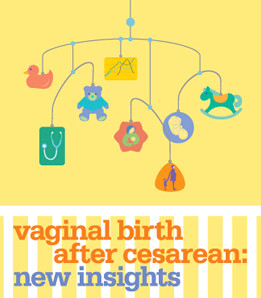 For decades, doctors thought that a woman who had given birth by cesarean section would have to deliver future babies by another cesarean, which requires an incision in her abdominal wall and uterus. Then in 1980, an NIH Consensus Development Conference panel questioned the necessity of routine repeat cesarean deliveries based on the available evidence about the procedure. Health care providers began to give women who had a prior cesarean delivery the option of trying labor and vaginal delivery, and rates of vaginal birth after cesarean (VBAC) increased. But for reasons not well understood, the trend didn’t last. Since 1996, the rate of women attempting a VBAC has steadily declined, while the number of cesarean deliveries has increased.

Why have VBAC rates declined? What is the balance of harms and benefits of these methods of delivery? What factors and circumstances come into play when deciding about VBAC or a repeat cesarean? What critical information about VBAC or repeat cesarean is missing? To understand the various issues involved, the NICHD and the NIH Office of Medical Applications of Research are holding a three-day Consensus Development Conference on Vaginal Birth After Cesarean: New Insights.

Women and their doctors have many considerations to weigh when choosing between VBAC and repeat cesarean. The medical risks and benefits of each approach aren’t clear cut. One well-known risk from VBAC is rupture of the mother’s uterus due to weakness of tissue at the scar from the prior surgery; what is less well known is that this complication is very uncommon. Repeat cesareans also carry risks for the mother, such as excessive bleeding or hysterectomy, but many people aren’t aware of these risks. There are risks and benefits of both methods for infants as well. Infants may experience neurologic injury during a VBAC delivery, but with a repeated cesarean delivery, they may experience respiratory problems.

Some nonmedical concerns also influence the decision. Hospitals may have recommendations against VBACs, and insurance policies may influence the chosen delivery method. Legal, ethical, and economic forces may also influence doctor and patient choices.

The NIH Consensus Development Conference aims to review all the available scientific evidence about these topics. An independent panel of experts will address questions, such as:

Unlike other conferences, which rely on content experts to make recommendations, Consensus Development Conferences are unique in that their recommendations come from an unbiased panel. Panel members have no conflicts of interest or financial or career interests related to the topic. They are highly regarded in their own fields, but are not closely aligned with the subject.

The meeting includes an in-depth presentation of evidence, including a Systematic Literature Review (a complete review and synthesis of published information prepared by the Agency for Healthcare Research and Quality) and presentations from recognized experts on the topic. Periods of testimony from the general public and participants are also included. The panel takes the evidence and information into consideration and prepares and presents a final statement.

VBAC, other methods of childbirth, and promoting health pregnancy and delivery are of particular interest to the NICHD. These topics are a focus of the NICHD’s Pregnancy and Perinatology Branch (PPB). In one PPB-supported study of the risks and benefits of VBAC, researchers reviewed childbirth records from more than 25,000 women who had previous cesarean deliveries. They found less than 1 percent of women who attempted a VBAC experienced uterine rupture. In addition, the NICHD Division of Epidemiology, Statistics, and Prevention Research’s Consortium on Safe Labor aims to develop new evidence-based definitions of labor protraction and arrest more attuned to current obstetric populations.

The final consensus statement from the conference will likely have major implications for public health and will help health care providers and patients make educated, evidence-based decisions.