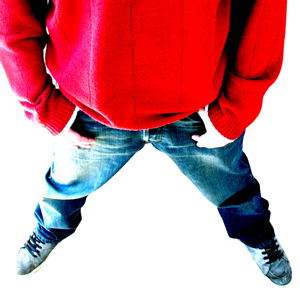 When John* developed an illness he could not shake, he went to his city health department to be tested for HIV, the virus that causes AIDS. He told nobody, not even his family, fearing the social stigma that often comes with HIV infection. The first test came back positive. He was called back for a second test, which confirmed that he had HIV.

“I was dealing with it by myself,” John recalled. “For 4 weeks, I kept on going with my life like nothing was wrong.”

The health department told him that as long as the number of CD4 cells in his blood did not dip too low, he would be okay (HIV infects and kills CD4 cells, which are a key part of the immune system).

“I was kind of afraid,” John said. He had learned about HIV/AIDS in high school and had done some research online, but he was uncertain what would happen if his CD4 cell level dropped. He also wasn’t sure how HIV could be spread to other people.

Then, the health department referred him to an outreach worker from NICHD’s Adolescent Medicine Trials Network for HIV/AIDS Interventions (ATN), who helped John get care at a local ATN site. There, he found what he needed: information, treatment, support, and friendship.

The program that helped John receive care is called SMILE (Strategic Multisite Initiative for the Identification, Linkage, and Engagement to Care of Youth with Undiagnosed HIV Infection). It is conducted by the ATN and NICHD in collaboration with the Centers for Disease Control and Prevention (CDC) and the Health Resources and Services Administration. This program gives youth like John the opportunity to contribute in the fight against HIV through participation in research.

SMILE has established a special partnership among U.S. ATN clinical trials sites and health departments to improve the identification of youth with undiagnosed HIV infection and link them to youth-friendly clinical care. Since its implementation in 2010, SMILE has identified more than 3,700 youth and linked approximately two-thirds of them to care at ATN sites across the country.

The ATN is a research network devoted to the wellbeing of youth 12 to 24 years old who are HIV-infected or are at risk of infection. The network comprises 14 clinical sites that conduct research and provide adolescents with treatment and support. It is funded by the NICHD, as well as the National Institute on Drug Abuse and the National Institute of Mental Health, two other NIH components.

John became a part of the ATN nearly a year ago and now sees his doctor at an ATN site at least quarterly. He receives medications to keep the virus in check and his immune system in good working order. He also attends regular group sessions, where he and his peers discuss issues related to their HIV status and to being young and gay. These regular meetings also have helped him get to know the staff at the clinic and helped the staff get to know him. 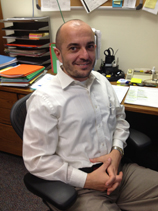 “The majority are eager to learn about their health and their bodies,” Dr. Kapogiannis said. “They want to know what HIV is, what it means for them, and how they can manage it and lead normal lives. My job is to help them find ways to accomplish their goals.”

Young men who have sex with men are the largest group of patients enrolled in ATN studies. However, there also are a number of enrolled patients who contracted HIV from their mothers around birth. Advances in prevention have led to a huge decline in mother-to-child transmission of HIV, but there still remain cases in the United States. Perinatally infected youth have different needs because they have lived with HIV infection for much longer, may be more familiar with health care systems and clinics, may have suffered complications from their HIV and its treatments, may have taken many different anti-HIV medications, and may have viral resistance that makes their HIV more difficult to treat. Regardless of how HIV infection is acquired, non-adherence to medication is the biggest obstacle in successfully treating all adolescents with such chronic illness.

Responding to a Complex Problem

For most age groups, the rates of new infections have either stabilized or are coming down, said Dr. Kapogiannis. But over the most recent 5-year period for which data are available, the infection rate for adolescent minority males 13 to 24 years old has been steadily increasing.

Young people are an important group for health care workers to target with HIV/AIDS prevention efforts. In 2010, people 13 to 24 years old accounted for approximately one-fourth of all new HIV infections in the United States, according to the CDC.

One of the main drivers of the epidemic among young people is that, although they tend to be more sexually active than older adults, they are less likely to be aware of their HIV status and are unlikely to be in treatment. Without treatment, they are more likely to be infectious.

Only about 40% of adolescents who are infected know their status, whereas nearly 80% of infected adults are aware of their infection. Identifying HIV-infected adolescents is difficult, and even when they are identified, keeping them engaged in treatment and care is a challenge. Through successful research, and with the help of effective multi-agency collaborative programs such as SMILE, the ATN aims to:

The ATN conducts research in a variety of areas, including the following:

, is studying the safety and effectiveness of the drug Truvada when taken to prevent HIV infection in a group of at-risk transgender girls and young men who have sex with men.

Truvada—which is a combination of two antiretroviral drugs, emtricitabine and tenofovir—has been approved by the Food and Drug Administration for PrEP against HIV infection. To be most effective at preventing HIV infection, Truvada must be taken daily and used in conjunction with a condom.

Among the questions the study will answer are whether the youth will take the drug every day, as directed; whether taking the drug might increase their risky behaviors; and whether the drug might affect bone health in these young people, who are still growing.

Youth enrolled in the ATN often are encouraged to evaluate ATN programs, like SMILE: what is working, what is not, and what changes they might suggest. By ensuring that the program fulfills their needs, ATN researchers increase the likelihood that youth will stay involved in care and receive vital ongoing education and encouragement.

John said that the program has informed him and has given him a chance to get to know other young gay men and the staff. He no longer feels alone. The only thing he would change? “I wish we had more group meetings,” he said.

“I’m very proud of John and what he has done,” Dr. Kapogiannis said. “He has been very engaged in learning more about HIV and sticking to his treatments. Now, his physical health has improved and his virus is undetectable.”

“John is an amazing young man who has faced significant trials and tribulations,” his ATN case manager added. “We’re very honored to be part of his life.”

Through NIH efforts like the ATN, research will continue to benefit HIV-infected youth and reduce the virus’s spread.

For more information about HIV/AIDS, select one of the following links: