Researchers seek to expand our understanding and develop new treatments 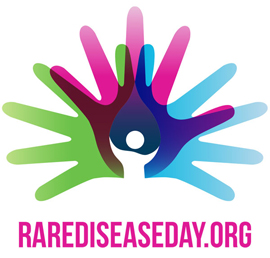 A disease is considered rare in the United States if it affects fewer than 200,000 people. There are approximately 7,000 rare diseases known today.

NICHD supports research on rare diseases to gain insights into their causes, characterize their effects, and improve diagnosis and treatment. In recognition of Rare Disease Day

on February 29, 2016, we are rounding up some of our recent advances in rare disease research:

Researchers Identify Mechanism Behind Treatment for Rare Brain Disorder
Riboflavin (vitamin B2) helps children overcome the devastating effects of a hereditary brain disorder, infantile leukoencephalopathy, by helping one protein fill in for a disabled protein.

NIH Teams with Industry to Develop Treatments for Niemann-Pick Type C Disease
Researchers from the National Institutes of Health have entered into an agreement with biotechnology company Vtesse, Inc., of Gaithersburg, Maryland, to develop treatments for Niemann-Pick disease type C, a rare, often fatal disease characterized by the accumulation of fatty materials in the cells and tissues of the body.

NIH Researchers Link Chromosome Region to Gigantism
Researchers at NICHD have found a duplication of a short stretch of the X chromosome in some people with a rare disorder that causes excessive childhood growth. They believe that a single gene within the region likely has a large influence on how much children grow.

Identifying a Gene Responsible for a Rare Disorder Could Point the Way to Earlier Diagnosis
Children with isolated congenital asplenia (ICA) are born with no spleen, making them less able to fight off bacterial infections. Because there are no outward signs of ICA, children often go undiagnosed until they get an infection, and then it may be too late. NICHD-supported researchers identified a specific gene that appears to be responsible for many cases of ICA and may lead to early intervention efforts in the future.

Identifying the Genetic Cause of a Rare Disease
Kuskokwim syndrome (KS) is a hereditary disorder that causes stiff joints and can lead to foot or pelvic abnormalities, making it difficult to walk or use the arms. This rare disease occurs among the Yup’ik Eskimos living around the Kuskokwim River in Alaska. NICHD scientists identified the cause of KS—a defect in a gene encoding a collagen-modifying protein. Now, genetic carriers of the disease can be identified with an inexpensive blood test.

Two Copies of Mutant Gene May Trigger Rare Adrenal Disorder
Many cases of a rare disorder of the adrenal glands appear to result from two copies of a mutant gene, according to a research team made up of scientists in France and at NICHD. The adrenal disorder, Corticotropin-independent macronodular adrenal hyperplasia, results in the formation of numerous tumors in the adrenal glands.

Animal Study Provides Insight into Two Serious Rare Conditions
NICHD researchers discovered that in mice, lack of iron regulatory protein 1 (Irp1) results in pulmonary hypertension, a form of high blood pressure that affects the lungs, and in polycythemia, a rare disorder in which the body produces excess red blood cells.

Children with Cornelia de Lange Syndrome (CdLS) May Develop Immune System Problems
CdLS is a genetic disorder that affects as many as 1 in 10,000 children. Children with the disorder typically have intellectual disability, upper limb defects, gastrointestinal complications, and heart defects, and in many cases, develop serious chronic infections. NICHD-supported researchers found that the children with CdLS had decreased percentages of T cells, which help fight off infections. In addition, about one-third of the children with CdLS had results consistent with antibody deficiency syndrome.

Researchers Discover Novel Genetic Deletions in Prader-Willi Syndrome (PWS) Patients
Patients with PWS are generally obese, have low muscle tone and mental ability, and produce few or no sex-related hormones. They also tend to have neurobehavioral and psychiatric problems, including abnormal repetitive behaviors. NICHD-supported researchers found specific gene deletions among some PWS patients that had not been previously identified.

NIH Researchers Identify Candidate Drug to Treat Batten Disease
NICHD researchers have identified a potential new drug that could help in the treatment of a form of Batten disease, a fatal childhood disorder. The researchers tested the drug in mice with the disease and found that it slowed the loss of coordination seen in the disorder, and extended the animals’ life span.

NICHD will continue to support research on rare diseases, with the overarching goal of improving the quality of life for people who have these conditions.