A Promising New Therapy for a Childhood Coordination Disorder

NICHD researchers create an innovative therapy for a coordination disorder 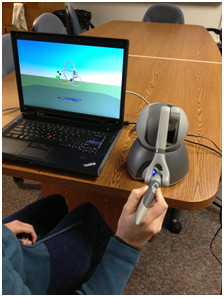 About 6% of children experience a significant delay in the development of motor coordination compared to their peers, according to the American Psychiatric Association. Children with developmental coordination disorder (DCD), experience problems with both: gross motor skills, which involve large muscle groups and include activities such as walking; and fine motor skills, which involve manipulation and hand-eye coordination, such as writing.

Failure to meet developmental milestones can have a significant impact on a child’s learning and social and emotional welfare. New types of interventions are needed to help children with DCD learn complex motor skills.

Researchers at Indiana University recently tested a three-dimensional computerized device to help train children with DCD to perform manual actions. The virtual reality technology, called PHANTOM Omni from Sensable Technologies, allows users to progress through a virtual path in the air and to follow their movements on a computer screen.

In the study funded by the NICHD's Child Development and Behavior Branch, researchers observed the children using this technology as they played a tracing game in which a fish follows a path shown on the computer. The game automatically adjusted several variables of complexity depending on the child’s pace and ability, allowing children with DCD to first learn to approximate a movement and then to improve it with practice.

After 5 or 6 weeks of use, the researchers reported a marked increase in the manual abilities of children with DCD. The differences between children with DCD who used the technology and typically developing children largely disappeared. This technology could be used in a variety of settings without the need for constant professional assistance and could effectively improve coordination in children with DCD. To read more about the study, visit PMID: 23076426.

For more information on this finding or on DCD, select one of the following links: