VDAC as a Global Regulator of Mitochondrial Metabolism; it's role in Cancer and Neurodegeneration

Mitochondria-related metabolic and neurodegenerative diseases are increasing in epidemic proportions not only in industrialized countries, but even in emerging economies where the population is aging and also exposed to a Western, high-calorie diet. Most alarming is that a growing number of children are suffering from what traditionally were regarded as “age-related” diseases, such as diabetes. Children with severe forms of mitochondrial disease often experience developmental delay, seizures, and cardiac dysfunction. Children with autism are more likely to have mitochondrial dysfunction than normally developing children. Moreover, the emerging evidence suggests a strong association of toxicant or drug exposure during the perinatal period and the development with the metabolic-related diseases and neurotoxicity later in life.

Regulation of mitochondrial outer membrane permeability is crucial in normal metabolite exchange between mitochondria and cytoplasm (thus controlling respiration), and in apoptosis, by releasing apoptogenic factors into the cytosol. The voltage-dependent anion channel (VDAC), the major channel of this membrane, controls a significant portion of the outer membrane function. The uniqueness of VDAC’s role in regulation of mitochondrial metabolism mainly arises from its unique location—at the interface between the mitochondria and the cytosol where it serves as a pathway for the water-soluble mitochondrial respiratory substrates and small ions. VDAC has been shown to be involved in a wide variety of mitochondria-associated pathologies such as diabetes, hypertension, cardiovascular diseases, various cancers, and neurodegenerative disorders, such as Parkinson’s, Alzheimer’s, and amyotrophic lateral sclerosis. Recently, using the mouse model of Leigh syndrome, VDAC was identified as a specific target of succination in the brainstem. Leigh syndrome, a progressive encephalopathy that is the most common clinical pediatric presentation of a defined mitochondrial disease, affects approximately 1 per 40,000 live births. Therefore, identification of pharmacological agents for VDAC regulation is absolutely crucial for improving outcomes of mitochondrial diseases. The key question remains is how VDAC regulates metabolite fluxes between mitochondria and the cytosol.

Our lab discovered that two abundant but not related cytosolic proteins, dimeric tubulin and neuronal a-synuclein, modulate VDAC permeability by inducing characteristic rapid reversible blockages of VDAC reconstituted into planar lipid membranes with nanomolar efficiency. Thus, these two cytosolic proteins could control the fluxes of ATP, ADP, and other metabolites through VDAC. Notably, while both a-synuclein and tubulin are cytosolic proteins with other functions (tubulin is the building block of microtubules), they appear to double as membrane-associated proteins, displaying high affinity to mitochondrial membranes. In this second role, they are potent regulators of VDAC.

One of the intriguing implication of VDAC modulation by tubulin is its coupling with the Warburg-type aerobic glycolysis characteristic of many tumor cells where the VDAC-tubulin complex may play a role of “glycolytic switch” in cells towards aerobic glycolysis or oxidative phosphorylation. These findings may help to identify new mechanisms of mitochondria-associated action of chemotherapeutic microtubule-targeting drugs via VDAC/tubulin interaction, and also to understand why and how cancer cells preferentially use inefficient glycolysis rather than oxidative phosphorylation. 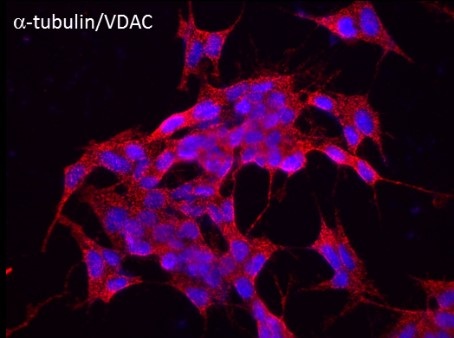 Figure 2. A model of the restrictive blockage of the VDAC pore by tubulin. Left: Representative current trace of single VDAC channel reconstituted into planar lipid membranes in the presence of 10 nM tubulin. Fluctuations of channel conductance between open and blocked states represent individual time-resolved blockage events. Middle – A structure of a/b-tubulin dimer with disordered acidic C-terminal tails (red) exposed out of the tubulin globule. Right: The molecular image of the VDAC1-a-tubulin complex embedded into a lipid bilayer (from S.Y. Noskov, T.K. Rostovtseva, and S.M. Bezrukov. ATP transport through VDAC and VDAC/tubulin complex probed by equilibrium and non-equilibrium MD simulations.Biochemistry, 2013, 52:9246−9256). The negatively charged C-terminal tail of a-tubulin partially blocks the channel reducing its conductance and reversing ion selectivity, thus totally abolishing ATP translocation. The ensemble of complexes has been obtained using protein-protein docking (ROSETTA-docking). Explicit MD simulations were run with the NAMD program for 50 ns in 1 M of KCL and a DOPE lipid bilayer.

Intrinsically disordered neuronal protein a-synuclein is highly expressed in the central nervous system and constitutes up to 1% of total cytosolic protein in normal brain cells. It is the major component of the Lewy bodies characteristically observed in the brains of Parkinson disease (PD) patients. Importantly, a-synuclein accumulation and mitochondrial dysfunction are believed to play pivotal roles in the pathogenesis of PD and others a-synucleinopathies. However, the precise role of a-synuclein in normal brain cells and in a-synucleinopathies, particularly in its monomeric form, remains largely mysterious. Our lab discovered that monomeric a-synuclein not only reversibly blocks VDAC conductance, similarly to what has been shown for tubulin, but also is able to translocate through the VDAC pore. Experiments with the yeast model of PD supported electrophysiological results by demonstrating that VDAC is indeed required for a-synuclein toxicity in yeast. Our ongoing experiments on a cellular model of PD using dopaminergic human neuroblastoma BE(2)-M17 cell lines transiently transfected with either wild type alpha-syn provide further evidence that a-synuclein both, co-localizes with VDAC at the mitochondria outer membrane and translocates to the mitochondria, most likely through VDAC, targeting electron transport chain complexes at the inner membrane thus causing their impairment and reduction of oxidative phosphorylation. Our results suggest that the functional interaction of monomeric a-synuclein with VDAC could be essential for both physiological adaptation of mitochondrial respiration and dysfunction in PD and other a-synucleinopathies.

Surprisingly, there are zero known pharmacological agents for VDAC. This is in striking contrast with ligand- or voltage-gated ion channels pharmacology. Therefore, our next goal is to develop VDAC pharmacological agent(s) using a discovered in our lab mechanism of VDAC permeability regulation. Using intelligent structure-inspired drug design based on our recent findings of VDAC regulation by tubulin and a-synuclein and our general model of the multistep interaction of VDAC with these proteins, we propose a list of small peptide compounds which are potential blockers of VDAC conductance. We are planning to test a library of synthesized small peptide compounds that may serve as effective and specific (with a nanomolar efficiency) inhibitors of VDAC.