Bacterial infection remains a significant cause of morbidity and mortality standing in the way of healthy human development. A great number of bacterial toxins (more than a third of the presently identified) form pores in the mammalian cell membranes, and these pore-forming toxins are often identified as important virulence factors. For most of them, there are no antitoxins developed and approved for human use. Pediatric Waterhouse-Friderichsen syndrome is a condition of overwhelming sepsis with adrenal failure and disseminated intravascular coagulation caused most commonly by Neisseria meningitides and, as more recently described, by Staphylococcus aureus involving the action of pore-forming toxins. This catastrophic syndrome develops so rapidly that antibiotics frequently cannot act fast enough to save life.

Additionally, the ferocious capacity of different bacteria to acquire and express antibiotic resistance presents a serious public health threat. For instance, S. aureus first acquired the gene for penicillinase and became resistant to penicillin. About a year later, it mutated into a methicillin-resistant S. aureus (MRSA) strain, unresponsive to most penicillin-derived antibiotics. The first severe MRSA outbreak in the United States occurred in the late 1960s, and this threat continues with the strains resistant to nearly all known antibiotics.

This alarming situation requires us to look for alternative, complementary, and conceptually new approaches. One of them, being developed in our lab, is to create antidotes to the poisonous action of bacterial toxins by inhibiting their pore-forming components via pore blockage. This approach is altogether different from the vaccine and antibiotic protection, as it neither shields the human body against the invasion as the former nor directly kills the invading bacteria as the latter. Nevertheless, its beneficial effect is obvious and has been clearly demonstrated—the antidotes give more time for the infected organisms to react to the bacterial invasion and to build up their immune defense.

We believe that our approach may lead to the development of new therapeutics against many bacterial and viral pathogens utilizing pore-forming proteins as virulence factors. The list of the pathogens may include but is not limited to S. aureus, B. anthracis, C. botulinum, C. perfringens, H. pylori, A. hydrophilia, C. difficile, V. cholerae, C. septicum, hepatitis C virus, influenza virus and HIV. 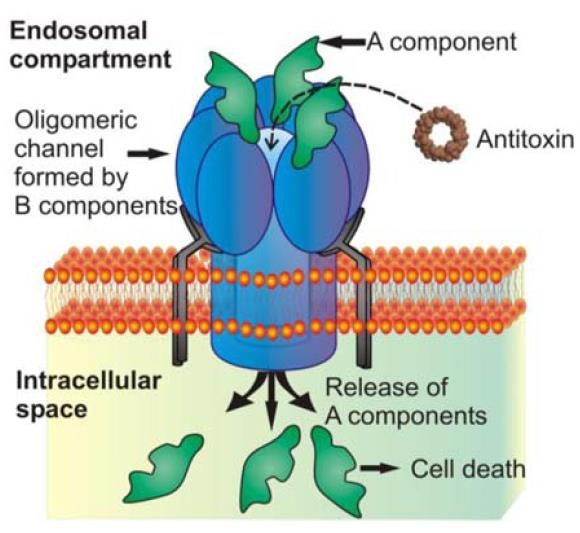 Figure 1. Blocking bacterial toxins at the single-channel level. The idea is that the binding component of a binary bacterial toxin could be effectively inhibited by an antitoxin blocking the pore. Explored examples include the pore-forming bacterial toxins of Bacillus anthracis and a family of related clostridial binary toxins (from S.M. Bezrukov and E.M. Nestorovich, 2016, Inhibiting bacterial toxins by channel blockage, FEMS Pathogens and Disease, 74, ftv113).