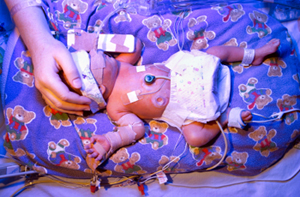 In the last three decades, advances in medical technology and neonatal intensive care have significantly improved the survival rates of infants born preterm. These technologies have also helped some of the smallest preemies, called extremely low birth weight (ELBW) and defined as infants weighing less than 2.2 pounds.

With this progress, however, also comes evidence that ELBW children have higher rates of chronic illness and developmental problems than do normal birth weight (NBW) children who are born at term. Many of these differences are well documented during the infant and early childhood periods, but there has been less followup of the health outcomes of these infants as they grow into adolescents.

Recent findings from an NICHD-funded longitudinal study provide new evidence on longer-term health trends of these infants. The study, which was supported through the NICHD Child Development and Behavior Branch, followed ELBW children into adolescence, when numerous unique developmental changes, including puberty, are taking place.

The study focused on changes in the rates of chronic health conditions when children were 8 years old and 14 years old. Researchers defined a “chronic health condition” as something that affected a child’s functioning or that required the use of special equipment or assistive services and included asthma and obesity. The researchers found that overall rates of chronic conditions were higher in ELBW children than among their NBW peers at age 14 years. However, data on asthma and obesity in the two groups offered interesting results.

At age 8 years, 12 percent of ELBW children were considered obese, compared with 16 percent of their NBW counterparts. By age 14, this gap had closed and rates were not significantly different between the two groups, with a 19 percent rate of obesity among ELBW children and 20 percent among NBW teens. The increases in obesity rates among both ELBW and NBW reflect the current obesity epidemic. In addition, the “catch-up” growth seen among ELBW youth suggests long-term health effects for metabolic and cardiovascular disease. The considerable rate of this catch-up between ages 8 years to 14 years among ELBW individuals may further intensify health risks in adulthood.

In examining asthma rates, researchers found that the NBW teens were doing the catching up to the ELBW group. By the age of 14 years, researchers found no significant difference between rates of asthma that required medication between the two groups. In addition, rates did not change for ELBW children between ages 8 years and 14 years, holding steady at about 25 percent. Among NBW children, however, the researchers saw a significant increase, from 8 percent to 17 percent, between ages 8 years and 14 years. The researchers suggest that different factors may contribute to asthma in ELBW and NBW youths, such as abnormal lung development or lung function in ELBW children, and genetic susceptibility and environmental factors in their NBW counterparts.

These findings suggest that health care providers who care for ELBW infants during their childhood and into adolescence may need to consider these patients at risk for certain chronic conditions, such as asthma and obesity. Knowing these risks enables providers to pay closer attention to certain aspects of patient health during adolescence, so that preventive measures can help improve health and reduce or eliminate these types of health problems into adulthood.

For more information on this finding or on preterm birth, select one of the links below: