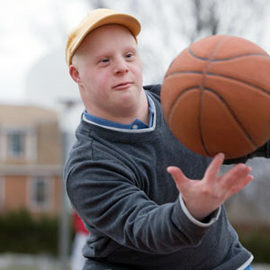 The NIH recently released Down Syndrome Directions: The National Institutes of Health Research Plan on Down Syndrome (PDF - 772 KB), an updated strategy to advance research related to Down syndrome.

The Plan was developed by the NIH Down Syndrome Working Group with input from members of the public-private Down Syndrome Consortium, external researchers, health care providers, and self advocates and families.

The first NIH Down Syndrome Research Plan was released in 2007. Since then, the NIH has supported the development of new research resources, including DS-Connect®: The Down Syndrome Registry, and promoted increased collaboration among researchers, advocates, and families.

Highlights of the Revised NIH Research Plan on Down Syndrome

Features of the updated Plan include:

As called for in the original Research Plan, NIH Institutes and Centers teamed up to fund new Down syndrome research projects, which have yielded a variety of advances. For example, scientists working within the framework of the Plan have been able to:

The NICHD has supported and conducted research on Down syndrome and other intellectual and developmental disabilities since it was established. With the publication of the updated Research Plan, the NIH and NICHD aim to sustain the recent momentum in Down syndrome research to help further improve the health and well-being of individuals and their families.

More NICHD Information on Down Syndrome