More than 10 years of research reveals much about fragile families 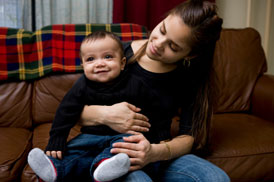 Families today look very different than they did a generation or two ago. According to recent data, for example, 40 percent of infants are born to unmarried mothers—more than double the number for 1980.

To understand the evolution of America’s families, the NICHD supports nationwide research that examines families—including "fragile families" of unwed parents and their children—patterns of change in families, and the effects of these changes on children, parents, and society as a whole.

Who are the mothers and fathers in these fragile families? How do their relationships—to each other and to their children—change over time? What is life like in a fragile family? And what are the experiences of children from fragile families as they grow and enter school?

. The study is supported through the NICHD Demographic and Behavioral Sciences Branch and offers a snapshot of life for fragile families living in major cities today.

The overall aims of Fragile Family are to understand:

Using hospital and home visits, medical records, and interviews with parents, child care providers, and teachers, Fragile Family researchers collected data on nearly 5,000 couples in 20 of the nation’s largest cities. Of the families that participated in the study, three-fourths were fragile families—unmarried when their child was born.

The study showed that, when compared with married parents, unmarried couples:

Researchers also found that children in these families were at greater risk for physical and other types of abuse, poor performance at school, and behavior problems.

Other key findings reported from the Fragile Families study include the following:

The researchers also suggested actions that community leaders and policy makers could take to improve outcomes for fragile families, including tailoring existing interventions (which generally target married or middle-income couples) to the specific needs of unwed couples, especially to address relationship building and father involvement.