World Day for the Prevention of Child Abuse

Creating a culture of prevention 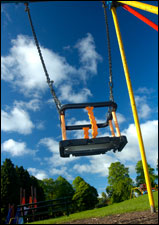 Abuse of children and adolescents is a complex international problem that seems to defy simple analysis and easy answers. To understand child abuse and exploitation, and to make an impact on the outcomes of these children, the NICHD is joining the American Psychological Association in marking the World Day for Prevention of Child Abuse on November 19.

The World Day, initiated by the Women’s World Summit Foundation (WWSF) in 2000, aims to create a culture of prevention around the world by encouraging governments and community/society organizations to play more active roles in protecting children. To focus attention on this difficult problem, the partners in World Day host activities to increase awareness and education about child abuse and violence toward children, to promote respect for the Rights of the Child

, and to make preventing child abuse a top priority.

Despite the fact that most cultures denounce child abuse, including sexual abuse and exploitation, the WWSF reports that more than 1 million children throughout the world enter the sex trade each year. After modest success with the first World Day in 2000, the WWSF reached out to governments and non-government organizations (NGOs) throughout the world to form the NGO Coalition. In 2001, the NGO Coalition had more than 150 NGO members that united to celebrate World Day, putting words into action to protect the world’s children. Currently, World Day includes an NGO Coalition of more than 700 members, as well as government partners, including federal, state, and local agencies in the United States, committed to creating a culture of prevention for child abuse.

The NICHD Child Development and Behavior Branch (CDBB) is partnering with the American Psychological Association, the Centers for Disease Control and Prevention, the American Society on the Abuse of Children, Safe Child, and other groups in the United States, along with the WWSF, the United Nations Children’s Fund (UNICEF), the World Health Organization, and other international groups to increase global prevention and protective measures, and to encourage nations to publicly and consistently denounce child abuse in all forms.

“Children are so vulnerable—they depend on us to take care of them, to love and protect them,” explained Valerie Maholmes, Ph.D., C.A.S., who manages the Social and Affective Development/Child Maltreatment and Violence Program within CDBB. “I am delighted that the world community has come together to raise awareness about this significant public health problem and to stop violence against children.”

, which advocates posting a yellow sticker in prominent places to show your support for preventing child abuse. In addition, on November 20, UNICEF, the United Nations Office of the High Commissioner for Human Rights, and the World Health Organization will release the United Nations Secretary World Report on Violence Against Children, to coincide with both World Day for the Prevention of Child Abuse and with the 15th anniversary of the Commission for the Rights of the Child.

In addition, the NICHD is highlighting its efforts to support research on various forms of child abuse and child violence by posting descriptions of related NICHD-supported research projects (PDF - 52 KB) and descriptions of related NICHD career development projects (PDF 35 kb) that aim to support the next generation of scientists to study this important topic.

“Our research calls attention to various dimensions of violence against children such as abuse, neglect and exposure to violence,” Dr. Maholmes said. “We expect the findings of this research to shed light on the impact of such acts on children’s development over time and, most importantly, to form a solid scientific base for developing intervention and prevention programs.”

For more information about World Day for the Prevention of Child Abuse and related topics, visit: