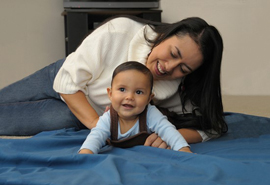 While the prevalence of sudden infant death syndrome (SIDS) in the United States has decreased by 50% over the last 20 years, SIDS remains the leading cause of death for U.S. infants 1 month to 1 year of age.1 This SIDS Awareness Month

, the NICHD highlights SIDS resources and research to help parents, caregivers, and medical professionals reduce the risk of SIDS.

SIDS is defined as the sudden, unexplained death of an infant younger than 1 year of age that remains unexplained after a thorough case investigation. This includes a complete autopsy, a full examination of the death scene, and a review of the infant’s and family health history.

The exact cause of SIDS remains unknown—in fact, researchers suspect multiple conditions may lead to SIDS—but we do know many ways to reduce a baby’s risk.

The NICHD has been a leader in research on SIDS since the early 1970s. The Institute’s efforts include studies on the causes and mechanisms of SIDS, research on the incidence and prevalence of SIDS, and outreach designed to educate parents and caregivers about ways to reduce SIDS risk. Select a link to learn more.

The NICHD-led Safe to Sleep® public education campaign, formerly known as the Back to Sleep® campaign, began in 1994. It was created to raise awareness about SIDS and SIDS risk reduction. Twenty years later, the campaign now provides resources for caregivers and community members to promote safe infant sleep strategies to reduce the risk of SIDS and other sleep-related causes of infant death, such as accidental suffocation. The campaign is supported by its collaborators, which include the Health Resources and Services Administration, Centers for Disease Control and Prevention, American Academy of Pediatrics, American College of Obstetricians and Gynecologists, First Candle, and Association of SIDS and Infant Mortality Programs.

The campaign provides information on how to create a safe sleep environment for babies, as well as on ways to reduce the risk of SIDS and other sleep-related causes of infant death, including:

Safe to Sleep® outreach efforts aim to spread safe infant sleep messages to everyone who might care for a baby. In addition to ongoing efforts to reach populations at high risk for SIDS and other sleep-related causes of infant death, recent and upcoming activities include a focus on:

The NICHD continues to support research that explores possible causes of SIDS and the effectiveness of SIDS interventions. The research is mostly conducted through the Institute’s Pregnancy and Perinatology Branch (PPB). Recent and ongoing efforts include the following:

On the 20th anniversary of the Safe to Sleep® public education campaign, the Institute remains committed to better understanding SIDS and to raising awareness about the ways to reduce the risk of SIDS and other sleep-related causes of infant death.