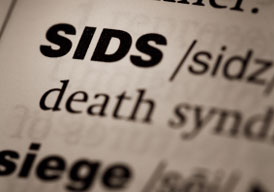 Recently the Food and Drug Administration (FDA) and the Consumer Product Safety Commission (CPSC) warned against the use of so-called "sleep positioner" products because of the dangers they pose to infants. These warnings serve as timely reminders during this SIDS Awareness Month that although we have learned a great deal about SIDS—the sudden, unexplained death of an infant younger than one year of age—we still have more to learn.

For many people, the Institute’s relationship to SIDS focuses on the Back to Sleep campaign. The campaign timeline is familiar: In 1992, the American Academy of Pediatrics (AAP) began recommending that babies be placed on their backs or sides to sleep to help reduce the risk of SIDS. In 1994, with added information from NICHD research, the NICHD, AAP, and other partners established the Back to Sleep campaign to educate parents, caregivers, and health care providers about reducing the risk of SIDS by placing infants on their backs or sides to sleep. Findings from NICHD-supported and other research led the AAP to revise its recommendation in 1996 to say that healthy babies should sleep wholly on their backs as the best way to reduce the risk of SIDS. In 2006, more than 2,300 infants died of SIDS in the United States—a decrease of more than 50 percent since the start of the Back to Sleep campaign.

But the story of the NICHD and SIDS and the dramatic reduction in U.S. SIDS rates is about more than the Back to Sleep campaign—It is really a story about NICHD science. During this SIDS Awareness Month, the NICHD wants to highlight its accomplishments in understanding the science of SIDS. These accomplishments have changed and continue to change the course of public health and to save infant lives.

Understanding the science of SIDS has been part of the NICHD’s mission since its founding in the early 1960s. The SIDS Act of 1974 (Public Law 93-270) put the NICHD at the forefront of SIDS research, making it the lead federal agency for SIDS research and charging it with providing information about SIDS and ways to reduce the risk of SIDS. Throughout its history, the NICHD has taken a multifaceted approach, supporting and conducting behavioral, biological, and translational research on SIDS.

The Institute’s research has also focused on the possible biological causes of or contributors to SIDS. Much of this research has focused on the brain—specifically parts of the brain that are thought to control breathing, heart rate, and sleep/arousal from sleep—and on the function of a chemical called serotonin, which helps cells communicate with one another. For example:

In collaborations with other agencies and organizations, the NICHD also seeks to understand SIDS risk in relation to other conditions and within certain settings, such as in relation to community health. The Prenatal Alcohol and SIDS and Stillbirth (PASS) Network, initiated in 2003, is one such example. This collaborative effort between the NICHD Pregnancy and Perinatology Branch and the National Institute on Alcohol Abuse and Alcoholism (NIAAA) relies on community-linked studies to investigate the role of prenatal alcohol exposure in SIDS risk and poor pregnancy outcomes, such as stillbirth and fetal alcohol syndrome. The PASS Network focuses on high-risk communities of the Northern Plains of North America and the Western Cape of South Africa and aims to decrease fetal and infant mortality while also improving child health in these communities.

The Study of Attitudes and Factors Affecting Infant Care (SAFE) also aims to further understand infant sleep practices and SIDS risks within racial/ethnic minority and lower socioeconomic communities. SAFE researchers will survey a nationally representative group of caregivers—meaning the ethnic backgrounds of caregivers in the study are similar to that of caretakers in the United States as a whole—to better understand the factors that make them more or less likely to follow safe sleep practices. Specific aims of the SAFE research are to:

The ultimate goal of research on SIDS is to understand enough about the disorder to be able to identify infants at risk and eventually eliminate it. Throughout the last four decades, NICHD research has helped us move significantly closer to achieving that goal.

The next NICHD Spotlight will focus on the outreach aspects of the NICHD’s SIDS portfolio.

For more information, select one of the NICHD links below: