NICHD Research Weighs in on Weight Gain during Pregnancy 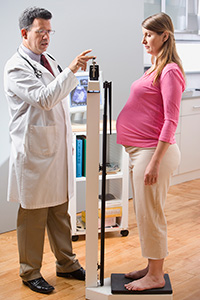 New findings from an NICHD-supported study of more than 8,000 women nationwide found that first-time mothers who gained more weight than recommended were at increased risk for high blood pressure during pregnancy, cesarean delivery, and delivering a larger-than-gestational-age (LGA) infant.

These findings reaffirm the recommendations of the Institute of Medicine (IOM) regarding weight gain during pregnancy. Those recommendations, released in 2009, were based on research from the NICHD, other NIH Institutes, and the March of Dimes.

The IOM guidelines recommend the following:

Research—including these recent findings—indicates that staying within the recommended levels can help lower the health risks for mothers and can lead to healthier outcomes for babies. Read more about the IOM recommendations at Weight Gain During Pregnancy: Reexamining the Guidelines

. To learn more about the NICHD's research on pregnancy and weight, including an interview with one of the authors, select a link below.

The newly released findings came from researchers in the Maternal-Fetal Medicine Units (MFMU) Network, which is supported through the NICHD's Pregnancy and Perinatology Branch (PPB). Using data that had been collected previously for a Network preeclampsia prevention study, MFMU researchers evaluated pregnancy outcomes for more than 8,000 pregnancies, including first-time mothers. For this secondary analysis, the researchers looked at outcomes based on total weight gain above and below the 2009 IOM guidelines on weight gain during pregnancy.

Of the 8,293 pregnant women who participated in the study at multiple sites across the country:

The study also found that women who were normal pre-pregnancy weight and those who were overweight were also at increased risk for cesarean delivery and for having an LGA infant. Previous research showed that LGA babies are at higher risk for birth injury and may have low blood sugar and other problems related to glucose regulation at birth.

Cathy Spong, M.D., the Associate Director of the NICHD Extramural Research Program and one of the authors of the study said that part of the problem may stem from the mistaken belief that a woman is "eating for two" during pregnancy. In fact, pregnant women should eat only around 300 additional calories per day during pregnancy.

Learn more about the study by watching the following video clips of an interview with Dr. Cathy Spong, Director of the NICHD Division of Extramural Research and one of the authors on the study:

Explaining why the study's outcomes are a concern

Read the Explaining why the study's outcomes are a concern text alternative.

Read the Explaining why pregnant women and women who are considering pregnancy should discuss weight gain with their doctors text alternative.

Describing the next steps researchers can take

Read the Describing the next steps researchers can take text alternative.

Read more about the study at: Pregnancy Outcomes with Weight Gain Above or Below the 2009 Institute of Medicine Guidelines.

Other NICHD Research on Pregnancy and Weight

Understanding the effects of weight gain before and during pregnancy is an important part of the NICHD's research portfolio. For instance:

These are just a few of the Institute's ongoing projects related to weight gain, overweight, and obesity before and during pregnancy.

The knowledge gained from this and other research adds to the spectrum on evidence-based information on promoting healthy pregnancies. By understanding more about potential pregnancy complications, including those related to weight, researchers can help minimize risks and improve outcomes for mothers and their babies.

For more information about pregnancy and weight, select one of the following links: