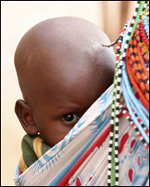 Each day, approximately 1,000 children—the majority of whom are newborns—become infected with HIV, according to the World Health Organization. HIV can be passed on during pregnancy or delivery, or even after the infant is born, through breastfeeding.

As a result of NICHD-supported and other research, the rate of mother-to-child transmission of HIV has dropped from more than 25 percent to less than 2 percent during the last two decades in the United States. Efforts are ongoing to bring similarly low rates to developing countries.

Previous NICHD-supported studies in resource-poor countries have provided evidence about ways to reduce HIV transmission during pregnancy and during delivery, with use of short regimens of anti-HIV drugs (see Shorter AZT Treatment Reduces Mother to Child HIV Transmission as Well as Longer Treatment but for Less Cost and Thai Study Shows That Inexpensive Treatment Reduces Risk Of Mother To Child HIV Transmission). However, in resource-poor countries, transmission of HIV through breastfeeding is still a critical problem, one that reduces the effectiveness of these anti-HIV regimens.

Studies supported by NICHD have shown that infants who breastfeed from HIV-infected mothers infection continue to be at risk of infection for the duration of breastfeeding (Analysis Shows Infants of Mothers Infected With HIV Face Nearly Constant Risk For HIV Infection For Duration of Breastfeeding). The findings of two other NICHD-supported studies, released this week, provide evidence-based insights on reducing HIV transmission through breastfeeding and improving overall infant outcomes, including survival.

In the United States, where safe infant formula is available, HIV-positive mothers are advised to formula feed their infants, not to breastfeed, to avoid passing on HIV through breast milk.

In many resource-poor countries, because safe, reliable, and inexpensive substitutes for breastfeeding are not available, reducing breast-milk transmission of HIV remains a difficult problem. In these areas, some women can’t formula feed because they don’t have a reliable or clean supply of drinking water. Others don’t have reliable electricity or fuel to sanitize water or to store formula. For others who live in poverty, the cost of formula simply puts it out of reach, especially when a ready supply of breast milk is free. In many of these areas, being HIV positive carries a social stigma; women who formula feed are seen as openly admitting they have the disease, which could leave them shut out of their communities.

In addition, infants in these areas rely more heavily on the immune system boost that breast milk provides than do infants in the developed world. Without consistent basic services, such as public sanitation and vaccinations, infants who don’t get breast milk are at greater risk for deadly infant diseases common in these countries.

Through its Pediatric, Adolescent, and Maternal AIDS (PAMA) Branch, the NICHD has been supporting research and clinical trials on reducing breast-milk transmission and other aspects of HIV/AIDS for two decades. The Branch focuses its efforts on the unique features of HIV/AIDS transmission and progression among women (pregnant and non-pregnant), infants, children, and adolescents. Findings from PAMA-supported studies are directly related to the reduction in mother-to-child HIV transmission in the United States and have helped to establish and add to existing guidance related to reducing this type of transmission internationally.

The PAMA Branch supported the two studies reported this week related to breast milk and HIV transmission. The first was a clinical trial conducted in Lusaka, Zambia. The second, co-sponsored by the PAMA Branch and the Centers for Disease Control and Prevention, was a clinical trial conducted in Blantyre, Malawi. Please read the news release below to learn more about the studies’ findings. To learn more about these topics, select one of the following links: