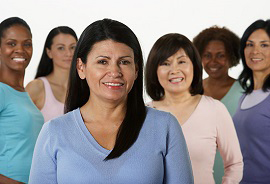 Women’s health is central to NICHD’s research mission. This work includes not only studies to advance knowledge of pregnancy, childbirth, and related health issues, but also a focus on diseases and conditions that are unique to women or that affect women in different ways. Here, we highlight some recent findings from NICHD’s women’s health research portfolio.

There are more than 100 different types of HPV, some of which can cause cervical cancer. The sexually transmitted infection is named for the warts, called papillomas, that are a common symptom of infection with certain types of the virus. Researchers in NICHD’s Division of Intramural Population Health Research (DIPHR) developed a statistical model that predicts cancer risk for women with HPV infection. Researchers found that the longer the HPV infection, the higher the risk that it will cause precancerous or cancerous growths on the cervix or on other genital areas. The researchers now aim to improve their model’s accuracy by incorporating more detailed clinical history. Read about this finding on PubMed Central.

Uterine fibroids are non-cancerous tumors that affect up to 70 percent of U.S. women at some point in their lifetimes. They can cause painful symptoms and abnormal bleeding from the uterus. Researchers funded by NICHD analyzed health records of more than 190,000 women enrolled in one of the largest U.S. commercial health plans to find those with diagnosed high cholesterol. They then identified women with fibroids and women without fibroids to see how treatment for high cholesterol affected fibroid symptoms and treatment. The researchers found that for women with uterine fibroids, cholesterol-lowering drugs, known as statins, reduced fibroid-related symptoms and surgeries. The scientists emphasized that their study focused only on women whose elevated blood cholesterol levels prompted their treatment with statins. They also noted that additional research is needed to determine whether statins could help women with fibroids who do not have elevated blood cholesterol. Learn more about this research on PubMed.

Comparing surgical and injection treatments for urinary incontinence in women

Millions of women in the United States have urinary incontinence, a sudden loss of bladder control in which urine leaks at unexpected times. This disruptive condition is common and is more likely to occur in older women (17 percent of women older than 45 years and 27 percent older than 75 years in the United States). Initial treatments with pelvic floor muscle training and/or medication sometimes are unsuccessful and, in those cases, physicians may recommend surgery or a series of Botox injections. NICHD-funded researchers conducted a randomized, controlled trial to compare the two treatments and determine which one is more effective. They found that both surgery and injections were effective, but that the injections were somewhat more effective at reducing episodes of urinary incontinence. The injections, however, also carried a higher risk of urinary tract infections. This information can help women and their physicians choose the treatment that best fits their individual situations. Check out more about this research on PubMed.

Scientists and health care providers know relatively little about vulvodynia, which is defined as chronic pain or discomfort of the vulva. NICHD-funded researchers followed a group of women for over 3 years to find out more about their vulvodynia symptoms. While remission of symptoms was common, more than one-half of those who experienced remission reported a return of symptoms within 6 to 30 months. Factors associated with the return of symptoms included experiencing more severe pain in general or after intercourse, experiencing pain upon being touched, having experienced pain for a longer time, or being diagnosed with associated conditions, including fibromyalgia and depression. Another group of NICHD-funded researchers examined provoked vestibulodynia (PVD), the most common subset of vulvodynia in which women experience pain of unexplained origin when touched in the area at the entrance to the vagina. They found that for women who have PVD and fibromyalgia, the “provoked” pain in PVD is more severe, compared with women who have just PVD. These findings add to a body of evidence suggesting that vulvodynia manifests differently in different women, and that women with associated pain conditions may experience more severe symptoms. Learn more about research on vulvodynia symptoms and PVD.

Endometriosis, a condition in which tissue that normally lines the uterus grows outside the uterus, affects up to 11 percent of reproductive-age women. Its most common symptoms are pain and infertility. NICHD investigators aim to learn more about this condition through the Endometriosis: Natural History, Diagnosis, and Outcomes (ENDO) study. ENDO researchers used studies to detect specific proteins and environmental chemicals implicated in the development of endometriosis. They identified proteins whose levels in samples taken from different parts of the body differed in women with and without the disorder. They also determined that these differences were associated with varying levels of “endocrine-disrupting chemicals,” which interfere with normal physiological (e.g., hormonal, metabolic) regulation of reproductive processes. These chemicals are commonly found in the environment, food, and other products. The findings suggest that measuring the levels of certain proteins could assist in diagnosing endometriosis. Visit PubMed Central to read the article.

For additional information, visit the Women’s Health A to Z Topic.