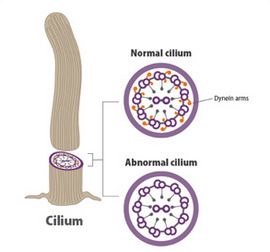 Tiny structures called dynein arms are vital to the movement of cilia. Researchers recently discovered that genetic alterations can damage or destroy dynein arms, which may explain what happens in the chronic respiratory disorder primary ciliary dyskinesia.

With support from different branches of the NICHD and other parts of NIH, scientists studying seemingly unrelated conditions in diverse animal models converged on a similar set of findings with an unanticipated connection to human health. Select a link below to learn more.

Study of the CCDC40 Gene and Primary Ciliary Dyskinesia

In 2011, several researchers supported by the NICHD’s Developmental Biology and Structural Variation Branch (DBSVB) who were studying a gene called ccdc40 in zebrafish and mice learned that the gene is involved in development of cilia and also affects organ positioning during fetal development. The collaborators consulted Heymut Omran, M.D., then at the University of Freiburg and now at the University of Muenster (Germany), who was following a group of patients with the rare condition primary ciliary dyskinesia (PCD).

Cilia are microscopic, hair-like structures in the airways that normally act to sweep bacteria out of the respiratory system. In PCD, the cilia are improperly formed and do not move properly. As a result, people with PCD are prone to getting serious infections of the ear, lung, and sinus.

Omran reported that the cilia in the animals with mutated versions of the ccdc40 gene looked just like the abnormal cilia of his patients with PCD. Genetic testing of the patients revealed that two-thirds of them also had mutations in the CCDC40 gene. Many of them also had congenital heart defects and atypical positioning of the heart (with the heart on the right instead of the left side of the body), suggesting a possible genetic link between the cilia-induced respiratory disorder PCD and the heart problems seen in patients with this disorder.

That work was published in the journal Nature Genetics in 2011 (PMID: 21131974). According to Dr. Lorette Javois, director of the DBSVB’s Program on Organogenesis (organ development), “This was a prime example of how our Branch’s basic scientists work with clinicians to move the medical field forward by first learning what a dysfunctional gene does in an animal model and then in studying the gene in humans. This knowledge may contribute to new treatment strategies for PCD.”

Study of the DYX1C1 Gene and Dyslexia

The Reading, Writing, and Related Learning Disabilities Program within the NICHD’s Child Development and Behavior Branch (CDBB) focuses on altogether different conditions than PCD. Among the CDDB’s research interests is the reading disorder dyslexia, which may be linked with abnormal migration of brain cells during fetal development. Individuals with dyslexia process language differently from most people. They may have trouble with handwriting, difficulty reading words accurately and with correct expression, and challenges with understanding the written word.

With NICHD support, a group of scientists was studying DYX1C1, a gene that seems be involved in dyslexia and in migration of brain cells during fetal development. They were “knocking out” (inactivating) the Dyx1c1 gene in zebrafish and mice, expecting to find abnormal brain cell migration patterns similar to those that have been found in human brains affected by dyslexia. While studying the animals, the scientists were surprised to observe instead that the animals’ cilia did not function properly. (In this video

Based on the connection between mutations in CCDC40 and PCD, the scientists went on to investigate whether the DYX1C1 gene is also associated with PCD in humans.

Dr. Omran and Joseph J. LoTurco, Ph.D., of the University of Connecticut, in Storrs, led a team of more than 85 researchers in 7 countries to learn more about the function of the DYX1C1 gene. Resources for this effort were provided by the NICHD as well as other parts of the NIH, including the National Heart, Lung, and Blood Institute; the National Institute for Mental Health; and the National Center for Advancing Translational Sciences. They learned that mutations in the DYX1C1 gene do disrupt the normal structure of cilia. (See figure.)

Genetic analyses confirmed that all 12 of Dr. Omran’s PCD patients had altered forms of the DYX1C1 gene, although none of them had dyslexia. This finding suggests that having an altered form of the gene does not cause dyslexia directly, even though it may affect risk for the condition.

“It’s remarkable how a single gene can play such a wide variety of roles, with an impact on many different kinds of functions,” Dr. LoTurco said, referring to the role of DYX1C1 in the formation of cilia in animals and in neuronal migration in humans. In late 2013, the research team published its findings about the DYX1C1 gene in the journal Nature Genetics (PMID: 23872636).

NICHD Fosters a Spectrum of Research Leading to Unique Observations

This research might lead to new methods for detecting PCD or dyslexia so that appropriate interventions can start early. Although these study findings do not have direct implications for understanding dyslexia, Dr. LoTurco said, the results do provide researchers with additional leads for investigating genetic patterns that may be linked to the reading disorder.

“With its broad portfolio of research projects, the NICHD supports scientists working in diverse fields and using different research models—from animals to humans—to enable discoveries such as this one,” explained Brett Miller, Ph.D., director of the Reading, Writing, and Related Learning Disabilities Program within the CDBB.

He also underscored the importance of continuing research on DYX1C1 and CCDC40: “DBSVB and CDDB are two very different branches, but we’re both supporting research that’s converging on this family of genes and showing their importance in normal development.”

For more information on this topic, select one of the following links: