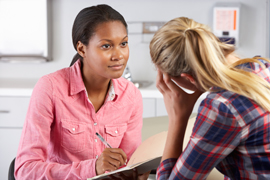 Endometriosis is one of the most common gynecologic diseases, affecting an estimated 5 million women in the United States. The condition occurs when tissue that normally lines the inside of the uterus grows outside the uterus. Pain and infertility are its primary symptoms.

NICHD supports research on endometriosis to learn more about its causes and to improve diagnosis and treatment. This National Endometriosis Awareness Month, we’re bringing you a round-up of some of our recent science advances related to the disease:

High-tech Analysis of Genetic Data May Yield New Test for Endometriosis
Analyzing genetic data obtained from uterine tissue, researchers identified patterns of gene activity that may be useful to diagnose endometriosis. The prototype diagnostic method not only can distinguish endometriosis from other disorders of the uterus, but also can identify the severity of the disease.

Understanding How Endometriosis Can Lead to Infertility
Progesterone, a steroid hormone involved in the menstrual cycle and pregnancy, is thought to play an important anti-inflammatory role in the development of endometriosis. Researchers examined tissue from women with and without endometriosis to evaluate how the interaction between progesterone and the expression of a specific gene in the uterus affects the infertility associated with the disease.

Baboon Study Sheds Light on Endometriosis Treatment
The female hormone estrogen has been linked to the growth of endometriosis patches. The drug letrozole reduces the body’s production of estrogen by blocking the activity of aromatase, the enzyme that produces estrogen. In this study, researchers found that baboons treated with letrozole had much smaller patches of endometriosis after treatment, and produced less aromatase, suggesting that aromatase and the estrogen it produces play an important role in the disease.

Finding Links Between the Immune System and Endometriosis
Although no one knows exactly why some women develop endometriosis, research has suggested that an altered immune response plays a role. In particular, studies have pointed to a type of immune cell called a T regulatory cell, which helps to suppress the immune response. In this study, researchers compared levels of T regulatory cells in baboons with and without endometriosis to learn more about the relationship between these cells and the disorder.

Retinoic Acid (RA) Suppresses Lesion Growth in a Mouse Model of Endometriosis
Because researchers think that inflammation may be important in developing endometriosis, they studied whether RA could inhibit endometriosis in mice. RA is a nutrient the body makes from vitamin A, and it is known to have an anti-inflammatory effect. In this study, researchers found that the RA-treated mice had significantly fewer endometrial lesions, significantly fewer lesions that had developed their own blood supply, and significantly less lesion volume than the placebo-treated mice. The amounts of two proteins associated with inflammation were also significantly lower in the treated mice. These results suggest that RA may be a potential treatment for women with endometriosis, but more research is needed.

Statins as a Potential Treatment for Endometriosis
Statins are a group of drugs commonly used to lower cholesterol in patients with a high risk of heart problems. Because statins have an anti-inflammatory effect, scientists are exploring whether statins might also be helpful for patients with endometriosis. In this study, researchers assessed the effect of statins on endometrial tissue from mice and people. They found that statins inhibited a specific immune system protein called MCP-1, which is thought to be involved in the establishment and persistence of endometriosis. Although more research is needed, the findings suggest that statins may be an effective treatment for endometriosis.

NICHD will continue to support research on endometriosis and other gynecologic diseases, with the overarching goal of improving the quality of life for women who have these conditions.