How a Mom, a Scientist, and NICHD Joined to Fight a Rare Disease 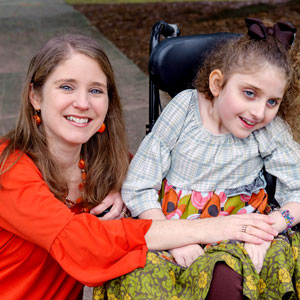 With her third child, Susan Lee thought she’d hit the jackpot. Compared with her two boisterous brothers, Alyssa was sweet and calm.

Some things weren’t quite right; at 9 months, Alyssa could barely hold up her head and wasn’t pushing up on her hands. But with physical therapy, she improved. It took her a little longer than most toddlers to learn to feed herself with a spoon and a fork, but she had it down by age 2. Six months later, Alyssa could walk, if someone helped her stand up first—she wasn’t as agile as other children her age, who are running by then, but she was making progress.

Then, shortly before Alyssa turned 3, everything seemed to go wrong at once. She suddenly started making choking sounds, and her parents rushed her to the emergency room. After three days in the hospital, she was sent home with no diagnosis. Then she started making repetitive hand-clapping movements. That same week, she took what would turn out to be her last independent steps. No one could figure out what was wrong.

“It was devastating,” Susan said. Susan is a special education teacher, so she knew how to connect Alyssa with Alabama’s Early Intervention program, provided by the federal Individuals with Disabilities Education Act. “I knew all the right things to be doing. I knew the latest therapies. I knew the best services. I had the best therapists in the city, probably the state. I had wonderful doctors—and nobody had answers.”

Susan’s frustration is familiar for parents of children who have rare diseases. Since these disorders are so uncommon—by definition, a rare disease affects fewer than 200,000 people in the United States—a doctor might go an entire career without seeing a particular disorder, or might assume a child’s symptoms are due to a more common disorder.

Soon after that week, one of Alyssa’s doctors ordered a new test that required she stay in the hospital overnight. Susan sat by Alyssa’s side, laptop open, doing research as she had every day for years.

"I had wonderful doctors—and nobody had answers."
- Susan Lee, parent of a child with a rare disease

“And, all of a sudden, Rett syndrome popped up,” she said.

It was all there: the hand movements, the breathing problems, the developmental delays—some toddlers with Rett syndrome even had Alyssa’s round face. Susan was sure she had the answer. The next week, Alyssa had blood taken for the genetic test, the only way to know for sure.

The Syndrome Behind the Symptoms

Rett syndrome is a developmental disorder that affects girls almost exclusively. Like Alyssa, most girls with Rett syndrome seem to develop typically for the first 6 months to 18 months, but then lose skills such as speaking, crawling or walking, and using their hands. Eventually, most need help with every activity of daily life. Estimates suggest that Rett syndrome occurs in one out of every 10,000 to 15,000 girls born in the United States.

Rett syndrome is caused by a mutation, or change, in a gene on the X chromosome. The gene, MECP2, codes for a protein that regulates when other genes get turned on and off in the brain. Girls have two X chromosomes, so those with one normal MECP2 gene and one abnormal MECP2 gene develop Rett syndrome. In boys, there is only one X chromosome, so they can have only one copy of the abnormal gene. Boys with MECP2 mutations are born with a much more severe, often fatal condition, or may die in the womb.

"There is great power in families, researchers, and even funding agencies coming together to try to understand [rare diseases] better."
- Dr. Melissa Parisi, NICHD

Rett syndrome has no cure. Instead, treatments are focused on reducing symptoms. For example, girls with Rett syndrome often have trouble gaining weight and are rarely heavier than 90 pounds. Intense nutritional support helps them maintain a higher weight, and many have feeding tubes to make it easier to get nutrition. Physical therapy can help with muscles that contract too much, interfering with the girls’ posture and growth and causing physical deformities. Medications can help control seizures, another health problem common to girls with Rett syndrome.

The Lee family lives near Birmingham, Alabama, home to Alan Percy, M.D., who has been studying Rett syndrome for more than 30 years. Percy is a pediatric neurologist at the University of Alabama at Birmingham School of Medicine and the principal investigator of the Rett Consortium

, one of 22 consortia in the NIH-supported Rare Diseases Clinical Research Network (RDCRN)

. After the results of Alyssa’s genetic test came back, Susan took her to see Percy. Five years later, he continues to be involved in Alyssa’s care—and she has taken part in research conducted by the Consortium.

Just as diagnosing a rare disease can be difficult for doctors, researchers often struggle to make advances in studying diseases that affect such small numbers of people. It can be difficult to find enough people with the disease to participate in a study. Linking individual research consortia in a network like the RDCRN allows researchers to share information, resources, and ideas.

“Even though these conditions are rare, there is great power in families, researchers, and even funding agencies coming together to try to understand them better,” said Melissa Parisi, M.D., Ph.D., chief of the Intellectual and Developmental Disabilities Branch (IDDB) at NICHD. “The hundreds of families who have enrolled their daughters in the Rett Consortium’s research projects over the years have made a difference,” she said. “I wish we could say we now have wonderful treatments, but we have to recognize that progress requires incremental advances in understanding the condition first.”

One of the Rett Consortium’s goals is to understand how Rett syndrome progresses. Many of the girls, including Alyssa, are enrolled in the Consortium’s long-term study on the natural history of the syndrome—that is, how the disorder progresses as symptoms come and go over time. The girls undergo periodic testing to monitor their symptoms. This research has made it possible to better define the condition and improve the criteria doctors use to diagnose it.

Getting girls diagnosed earlier can allow them to start treatment earlier to improve their quality of life, Percy said. Girls in the study used to be diagnosed at about age 4; now most are diagnosed by age 3. The Consortium also has examined life expectancy for girls with Rett syndrome. One-half are expected to live past age 50, decades longer than when the disorder was first recognized in the 1960s.

Other areas the Rett Consortium is working on include:

Today, Alyssa is in a regular first-grade classroom. She’s in Girl Scouts, rides horses, and goes to Sunday school. She can’t walk or roll over, but with the help of a computer that tracks her eye gaze, she can communicate with her friends, family, and teachers. Alyssa has already taken part in one drug trial, and the Lee family is waiting to find out whether she will be eligible for another.

“I always encourage other families to take that step.” Susan said. “Is it fun? No. But somebody has to. We’re not just doing this for Alyssa—we’re doing this for all the girls.”