The Long-Lasting Effects of Preterm Birth 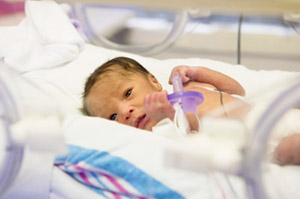 Infants born very preterm—defined as 32 weeks of gestation or less—face many challenges. Because their brains and other organs are not fully developed, these infants often require lifesaving medical treatments after birth, such as machine-assisted breathing. Although critical to survival, such treatments can cause pain and be stressful for infants. As they get older, these children may have problems linked to the stress and pain they experienced during sensitive infant development periods. These problems can include issues with visual memory (such as remembering pictures), poor planning skills, and symptoms of anxiety and depression.

A research group funded in part by the NICHD Pregnancy and Perinatology (PP) Branch recently released results from several studies that examined longer-term effects of pain and stress in infants born very preterm. Understanding how early stressors affect these infants' brain development may help to find ways to make preterm infants' first weeks of life easier and to promote healthy development. Select a link below to learn more.

The study found that the extremely preterm children, who had experienced more painful procedures after birth, performed worse on the test than did children in both other groups. The study also uncovered abnormal patterns in cortisol-based stress responses among both the preterm groups, but especially the extremely preterm, compared to children born at full-term gestations. Children with the most abnormal stress responses were also most likely to show symptoms of anxiety and depression in their daily lives.

However, positive child–mother interactions during the tests seemed to help lower stress in the extremely preterm children, whose initial cortisol levels were much higher than other children's levels. This finding reinforces earlier research suggesting that stress early in life, especially for those born extremely preterm, "reprograms" children's neurological and hormonal systems to respond to their environments in abnormal ways. This research also suggests possible ways to reverse some of the harmful effects of this reprogramming.

In the other two studies, the researchers used brain imaging to investigate cognitive deficits—problems with mental processes such as attention, memory, and problem solving—in 7-year-old children who were born very preterm. These cognitive problems, such as with visual memory, planning, problem solving, inhibition, mental flexibility, and multitasking, usually become noticeable during elementary school, even in preterm children with normal intelligence. The type of brain imaging used in these studies, magnetoencephalography (MEG), measures the magnetic fields produced by groups of brain cells that are sending electrical signals to reveal patterns of coordinated activity in different parts of the brain.

A second study examined very preterm children's brain waves in the cortex while the children were not performing any specific task. Researchers found that some of the brain waves of very preterm children were slower than those of other children. The type of slowing the researchers saw has been linked to a variety of brain disorders, including schizophrenia and Parkinson's disease. The researchers don't yet know how preterm birth leads to these brain wave patterns or how they, in turn, lead to cognitive problems.

The findings from these three studies provide insight into some of the longer term effects of preterm birth. But, importantly, the studies point to potential avenues of future research and interventions that could help these children overcome any deficits as they continue to grow.

For additional information on NICHD research on preterm birth, select one of the links below: