40 Years of Research from Liver to Brain 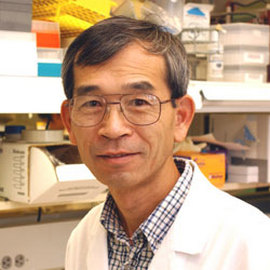 Forty years ago, the Nixon presidency was ending, U.S. troops were coming home from Vietnam, and Kuo-Ping (K.P.) Huang, Ph.D., was starting his career at the NICHD.

Over the next 4 decades, Dr. Huang established his own intramural lab at the NICHD and made several major contributions to our understanding of the body’s control of metabolism, cell signaling, and brain function. On January 3, 2014, he retired, leaving quite an impressive legacy behind.

Dr. Huang came to the Institute when it was also relatively young, in 1973, to work under Dr. Carl Robinson in the intramural Laboratory of Biomedical Science. By 1984, Dr. Huang was Chief of his own lab, the Section on Metabolic Regulation, then within the Endocrinology and Reproduction Research Branch, and now part of the Program in Developmental Neuroscience (PDN) in the NICHD’s DIR.

“K.P. Huang has had a prolific career at NIH,” said Chris McBain, Ph.D., Dr. Huang’s program director for the past 5 years in the PDN. “He has slowly chipped away at one main idea, and over a couple of decades he has built a really beautiful picture of his system.”

But Dr. Huang’s research is not the only thing that made an impression on his colleagues.

“I never saw him without a smile on his face,” said Stanko Stojilkovic, Ph.D., head of the Section on Cellular Signaling in the PDN, who also praised Dr. Huang as a “deep thinker” and a “highly ethical” scientist who was not satisfied with the result of an experiment until he repeated it many times.

Dr. Huang’s NICHD research began with his studies of the metabolism of glycogen, a sugar-storage molecule, in muscle and liver cells. In the 1970s and 1980s, Dr. Huang and his laboratory team uncovered new molecular mechanisms that control the construction of glycogen molecules in these cells. They also found that one of the enzymes involved in glycogen metabolism, called protein kinase C (PKC), is actually a family of enzymes, a discovery that kicked off research in many other laboratories to identify and characterize each enzyme family member. For this work, Dr. Huang won the NIH Director’s Award in 1988.

Realizing that the PKC enzyme family was most commonly found in the brain, Dr. Huang and his lab group began shifting their research focus to neuroscience by the late 1980s. The lab found that the enzymes regulated what was then a relatively obscure brain molecule known as neurogranin. Following that discovery, the team set out to understand the effects of the PKC–neurogranin system in the activity of brain cells, using brain tissue and mouse mutants. The hope was, ultimately, that these studies would uncover new information about cognition and behavior. What they learned is that the PKC–neurogranin system is so important to brain signaling that if even one part of it breaks down, the result is mental illness.

“The research environment here allows us to pursue any direction our research leads to,” said Dr. Huang about the shift in research focus. “In our case, we have evolved from the study of glycogen metabolism in muscle and liver to cognitive neuroscience. This drastic change in research focus would be difficult to undertake in other institutions.”

Dr. Huang recognizes all the members of his laboratory and many collaborators over the years for the many contributions they made to these discoveries. As his career at NICHD winds down after 40 years, Dr. Huang plans to spend more time travelling, visiting family and friends, and becoming more involved in his community.  He will continue at the NICHD as a volunteer to collaborate with other researchers and bring some of the remaining lab projects to fruition.

Even though the Section on Metabolic Regulation will close with his retirement, Dr. Huang’s work has already had a profound effect on our knowledge of human health. As other scientists continue to characterize the activities of PKC family members and investigate the neurogranin system, his work will continue. Despite the closed doors at the Huang lab, the door to discovery that he opened will remain.

For more information, select one of the following links: