​​​NICHD issues News Releases and Media Advisories to the news media. Spotlight and Research Feature articles explain NICHD research findings and public health issues to the general public. An Item of Interest is a short announcement of relevant information, such as a notable staff change.

Regular doses of the hormone oxytocin do not appear to overcome deficits in social functioning among children with autism spectrum disorder (ASD), suggests a study funded by the National Institutes of Health. The findings contradict earlier reports that indicated the hormone could alleviate the difficulties in social functioning characteristic of ASD. Oxytocin is associated with empathy and social bonding.

A mobile app was successful at distinguishing toddlers diagnosed with autism spectrum disorder (ASD) from typically developing toddlers based on their eye movements while watching videos, according to a study funded by the National Institutes of Health. The findings suggest that the app could one day screen infants and toddlers for ASD and refer them for early intervention, when chances for treatment success are greatest.

Read about NICHD’s research findings and activities from 2020.

Director's Corner: It’s a Family Matter: The NIH INCLUDE Project

The pandemic reinforces why the NIH INCLUDE (INvestigation of Co-occurring conditions across the Lifespan to Understand Down syndromE) Project matters to families and communities.

NIH announces funding for three centers for collaborative research on Fragile X syndrome, the most common inherited form of intellectual and developmental disability, and related conditions.

Release: Autism risk estimated at 3 to 5% for children whose parents have a sibling with autism

Roughly 3 to 5% of children with an aunt or uncle with autism spectrum disorder (ASD) can also be expected to have ASD, compared to about 1.5% of children in the general population, according to a study funded by the National Institutes of Health. The findings call into question the female protective effect, a theory that females have a lower rate of ASD than males because they have greater tolerance of ASD risk factors.

A small study funded by the National Institutes of Health suggests that sleep problems among children who have a sibling with autism spectrum disorder (ASD) may further raise the likelihood of an ASD diagnosis, compared to at-risk children who do not have difficulty sleeping.

Researchers at the National Institutes of Health have discovered in mice what they believe is the first known genetic mutation to improve cognitive flexibility—the ability to adapt to changing situations.

Researchers have developed a test to measure the expressive language skills of people with Fragile X syndrome, a genetic disorder that may result in intellectual disability, cognitive impairment and symptoms of autism spectrum disorder. Expressive language refers to the use of words to convey meaning to others. The work was funded by the Eunice Kennedy Shriver National Institute of Child Health and Human Development, part of the National Institutes of Health.

NICHD marks a 10-year partnership with WALTHAM® PetCare Science Institute, a division of Mars, to support research exploring the impact of interactions between animals and human companions.

Read about NICHD’s notable research findings and activities from 2019.

Identical twins with autism spectrum disorder (ASD) often experience large differences in symptom severity even though they share the same DNA, according to an analysis funded by the National Institutes of Health. The findings suggest that identifying the causes of this variability may inform the treatment of ASD-related symptoms.

Exposure to acetaminophen in the womb may increase a child’s risk for attention deficit/hyperactivity disorder and autism spectrum disorder, suggests a study funded by the National Institutes of Health and the Agency for Health Care Research and Quality. 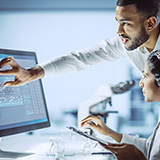 Inherited genetic factors account for approximately 80 percent of the risk for autism spectrum disorder (ASD), according to estimates published in a study funded by NIH. 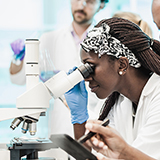 Four NICHD grantees will be honored July 25 in Washington, DC, with the Presidential Early Career Award for Scientists and Engineers. More than 300 researchers across the country are award recipients, the White House announced July 2.

Spotlight: NICHD Looks Back on 50 Years of Learning Disabilities Research

NICHD’s contributions to research on learning disabilities highlight decades of studies that informed the identification, recognition and treatment of these disorders.

Spotlight: How artificial intelligence and other new technologies are advancing healthcare

Scientists and engineers are pioneering new tools and methods to advance healthcare in revolutionary ways. Learn about emerging technologies funded by NICHD.

Spotlight: Harnessing light to study human development and the brain

NICHD’s Amir Gandjbakhche, Ph.D., leads a team that is pioneering the use of portable imaging technology to study human development and health conditions, including brain injuries and disorders.

As 2018 winds down, a new slideshow highlights a selection of initiatives, therapies, and scientific advances supported by NIH’s Eunice Kennedy Shriver National Institute of Child Health and Human Development (NICHD).