What are some of the basics of infant health? 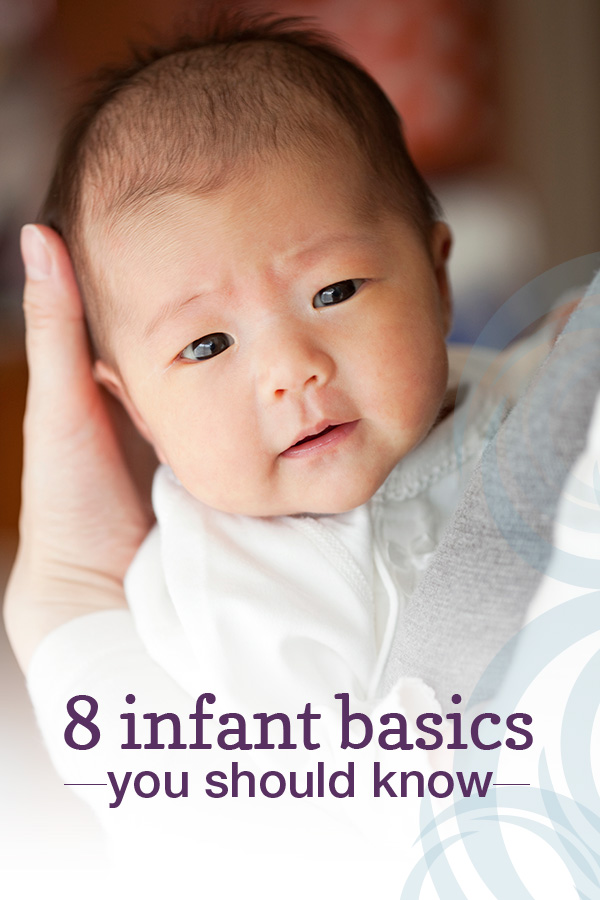 Some physical conditions and issues are very common during the first couple of weeks after birth. Many are normal, and the infant's caregivers can deal with them if they occur. Mostly, it is a matter of the caregivers learning about what is normal for their infant and getting comfortable with the new routine in the household.

New parents and caregivers often have questions about several aspects of their infant's health and well-being.

Infants' bowel movements go through many changes in color and consistency, even within the first few days after birth. It's important to keep track of your infant's bowel movements. Some things to look for include:

Also, because an infant's stools are normally soft and a little runny, it's not always easy to tell when a young infant has mild diarrhea. The main signs are a sudden increase in the number of bowel movements (more than one per feeding) and watery stools.

Diarrhea can be a sign of intestinal infection, or it may be caused by a change in diet. If the infant is breastfeeding, diarrhea can result from a change in the mother's diet. The main concern with diarrhea is the possibility that dehydration can develop. If fever is also present and your infant is less than 2 months old, you should call your health care provider. If the infant is over 2 months old and the fever lasts more than a day, check the infant's urine output and rectal temperature and consult a health care provider. Make sure the infant continues to feed often.

Care of the Umbilicus

The umbilical cord delivers oxygen and nutrients to the fetus while it is in the womb. After delivery, the umbilical cord is cut. The remaining part of the cord dries and falls off in about 10 days, forming the belly button (navel).

Follow your health care provider's recommendations about how to care for the umbilicus. This care might include:

Contact your health care provider if there is pus or redness.1

Many infants are fussy in the evenings, but if the crying does not stop and gets worse throughout the day or night, it may be caused by colic (pronounced KOL-ik). According to the AAP, about one-fifth of all infants develop colic, usually starting between 2 and 4 weeks of age. They may cry inconsolably or scream, extend or pull up their legs, and pass gas. Their stomachs may be enlarged. The crying spells can occur anytime, although they often get worse in the early evening.

The colic will likely improve or disappear by the age of 3 or 4 months. There is no definite explanation for why some infants get colic. Sometimes, in breastfeeding babies, colic is a sign of sensitivity to a food in the mother's diet. Rarely, colic is caused by sensitivity to milk protein in formula. Colic could be a sign of a medical problem, such as a hernia or some type of illness.

If your infant shows signs of colic, the first step is to consult with your health care provider. Sometimes changing the diet of a breastfeeding mother or changing the formula for bottle-fed infants can help. Some infants seem to be soothed by being held, rocked, or wrapped snugly in a blanket. Some like a pacifier.2,3

A rash on the skin covered by a diaper is quite common. It is usually caused by irritation of the skin from being in contact with stool and urine. It can get worse during bouts of diarrhea. Diaper rash usually can be prevented by frequent diaper changes.

Your health care provider can recommend care for diaper rash, which may include:

Caregivers should contact a health care provider if the rash is not better in 3 days or if the child becomes worse.4

Spitting up is a common occurrence for newborns and is usually not a sign of a more serious problem. After feeding, try to keep the infant calm and in an upright position for a little while. Keep a burp towel handy, just in case. Contact your health care provider immediately if your infant5:

Some parents worry that their infant will spit up and choke if they are put to sleep on their backs, but this is not the case. Healthy infants naturally swallow or cough up fluids—it's a reflex all people have. Where the opening to the windpipe is located in the body makes it unlikely for fluids to cause choking. Babies may actually clear such fluids better when on their backs.

The NICHD's Safe to Sleep® Campaign (formerly the Back to Sleep campaign) recommends placing infants to sleep on their backs to reduce the risk for sudden infant death syndrome (SIDS). Since the recommendation for back sleeping began in 1992, the number of fatal choking deaths has not increased. In fact, in most of the few reported cases of fatal choking, an infant was sleeping on his or her stomach.1

Although newborns usually have no visible teeth, baby teeth begin to appear generally about 6 months after birth. During the first few years, all 20 baby teeth will push through the gums, and most children will have their full set of these teeth in place by age 3.

An infant's front four teeth usually appear first, at about 6 months of age, although some children don't get their first tooth until 12 or 14 months. As their teeth break through the gums, some infants become fussy, sleepless, and irritable; lose their appetite; or drool more than usual. If an infant has a fever or diarrhea while teething or continues to be cranky and uncomfortable, contact your baby's health care provider.6

The FDA does not recommend gum-numbing medications with an ingredient called benzocaine because they can cause a potentially fatal condition in young children. Talk to your health care provider for advice on using these products for your teething infant.7 Other potential forms of relief for your infant include a chilled teething ring or gently rubbing the child's gums with a clean finger.7

Infants urinate as often as every 1 to 3 hours or as infrequently as every 4 to 6 hours. In case of sickness or if the weather is very hot, urine output might drop by half and still be normal.

Urination should never be painful. If you notice any signs of distress while your infant is urinating, notify your child's health care provider because this could be a sign of infection or some other problem in the urinary tract. In a healthy child, urine is light to dark yellow in color. (The darker the color, the more concentrated the urine; the urine is more concentrated when the child is not drinking much liquid.) The presence of blood in the urine or a bloody spot on the diaper is not normal and should prompt a call to the health care provider. If this bleeding occurs with other symptoms, such as abdominal pain or bleeding in other areas, immediate medical attention is needed.8

Jaundice (pronounced JAWN-diss) can cause an infant's skin, eyes, and mouth to turn a yellowish color. The yellow color is caused by a buildup of bilirubin, a substance that is produced in the body during the normal process of breaking down old red blood cells and forming new ones.

Normally the liver removes bilirubin from the body. But, for many infants, in the first few days after birth, the liver is not yet working at its full power. As a result, the level of bilirubin in the blood gets too high, causing the infant's color to become slightly yellow—this is jaundice.

Although jaundice is common and usually not serious, in some cases, high levels of bilirubin could cause brain injury. All infants with jaundice need to be seen by a health care provider.

Many infants need no treatment. Their livers start to catch up quickly and begin to remove bilirubin normally, usually within a few days after birth. For some infants, health care providers prescribe phototherapy—a treatment using a special lamp—to help break down the bilirubin in their bodies.

If your infant has jaundice, ask your health care provider how long the child's jaundice should last after leaving the hospital, and schedule a follow-up appointment as directed. If the jaundice lasts longer than expected, or an infant who did not have jaundice starts to turn yellowish after going home, a health care provider should be consulted right away. If you intend to get discharged early, particularly within 48 hours of birth, your infant's jaundice may peak later in the first week.

It is almost impossible to say how severe the jaundice level is by just looking at the baby's skin, especially for infants of color. Therefore, make every effort to keep follow-up appointments so the health care provider can check the level of jaundice with a simple blood test.

Close Citations
« What happens in the hospital? What are the best strategies for feeding? »