The incredible diversity and heterogeneity of interneurons was observed over a century ago, with Ramon y Cajal even hypothesizing in Recollections of My Life that “The functional superiority of the human brain is intimately linked up with the prodigious abundance and unaccustomed wealth of the so-called neurons with short axons.” Although interneurons comprise the minority (~20%) of neurons in the brain, they are the primary source of inhibition and are critical components in modulating and refining the flow of information throughout the nervous system. The classification of interneurons into specific subtypes is ever-evolving with the advent of new technologies to dissect gene expression and connectivity, but our general understanding of the developmental mechanisms that generate this diversity remains largely unknown. The goal of our lab is to dissect the genetic programs that determine these initial interneuron fate decisions during embryogenesis, and how the environment and genetic cascades interact to give rise to this stunning diversity of interneuron subtypes.

The medial ganglionic eminence (MGE) gives rise to the majority of forebrain interneurons, most notably the somatostatin- and parvalbumin-expressing (SST+ and PV+) subtypes. The MGE is a transient, dynamic structure that arises around E10 and bulges into the lateral ventricle over the next several days before dissipating at the end of embryogenesis. As initial fate decisions are generated within the MGE, there has been much focus trying to identify a logic for interneuron generation from this region. Previous experiments have characterized both a spatial and temporal gradient within the MGE that regulates the initial fate decision of becoming either parvalbumin- or somatostatin-expressing (PV+ or SST+) interneurons. SST+ interneurons are preferentially born early in embryogenesis from the dorso-posterior MGE whereas PV+ interneurons are born throughout embryogenesis and with a bias of originating from the ventro-anterior MGE. Our work discovered an additional mechanism regulating this fate decision: the mode of neurogenesis. Utilizing in utero electroporations, we found that PV+ interneurons are preferentially born from basal progenitors (also known as intermediate progenitors) whereas SST+ interneurons more commonly arise from apical progenitors. We hope build on this observation to integrate how these distinct spatial, temporal and neurogenic gradients coordinate to regulate initial fate decisions of MGE progenitors. 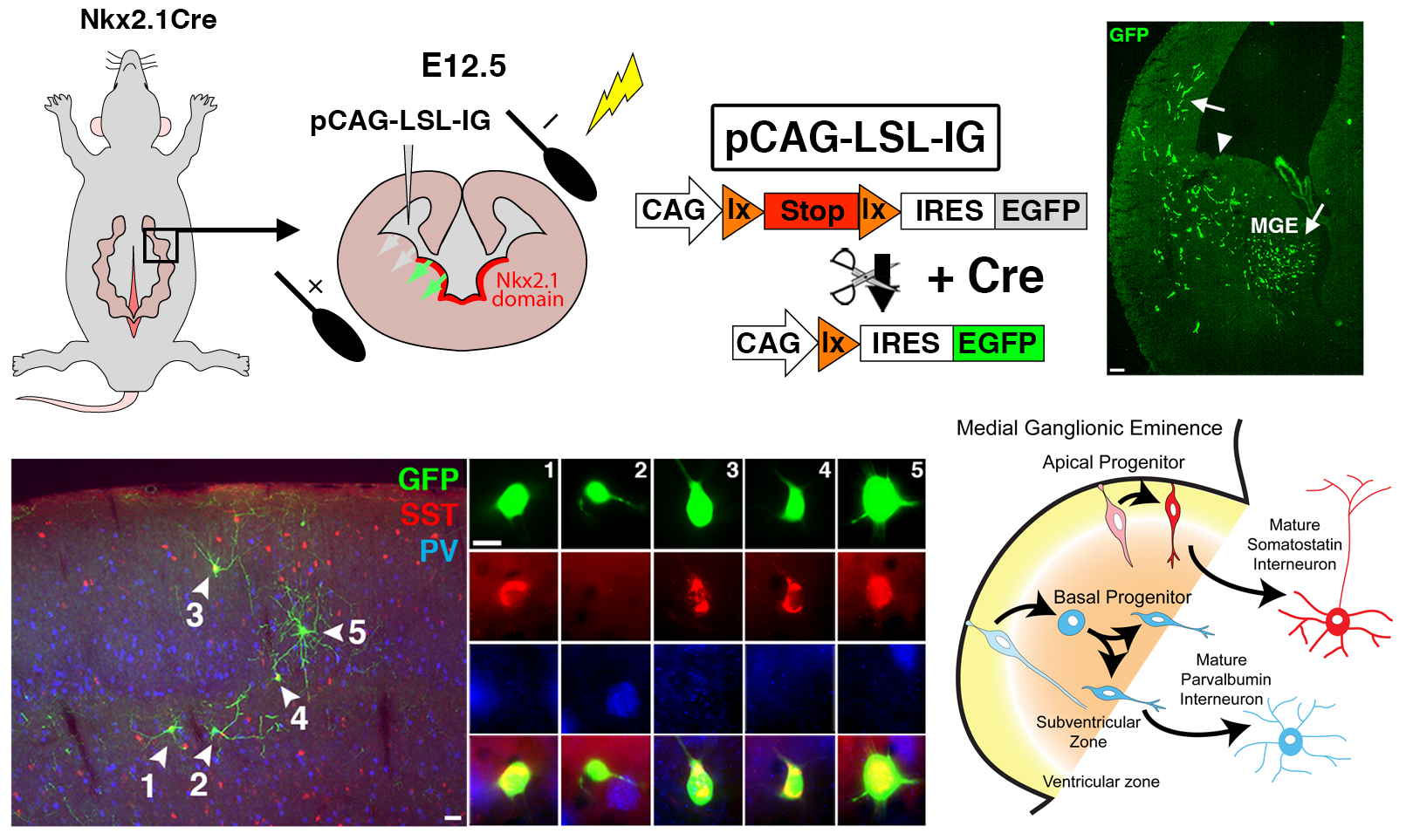 In multicellular organisms, cells are genetically homogenous but structurally and functionally heterogenous due to differential gene expression that is often mitotically heritable. The mechanisms regulating such expression are “epigenetic” as they do not involve altering the DNA sequence itself and include DNA methylation (DNAme), histone modifications, and higher-order chromatin structure. In particular, DNA and histone modifications often follow specific rules termed the “epigenetic code”, similar to the genetic code. Collectively, DNAme and histone modification have been reported to regulate transcription and chromatin (nuclear DNA and associated proteins) structure in many stem cell and developmentally critical processes.  Previous scRNA-seq experiments on the GEs identified surprisingly few region-specific genes in cycling progenitors despite the fact that these regions produce distinct GABAergic cell populations. Because there are dynamic changes in the chromatin landscape during development, a prevailing hypothesis is that epigenomic signatures may be a better predictor of cell fate during development, revealing both potential distal enhancers and/or genetic loci that may be ‘poised’ but not yet expressed. However, direct support for this hypothesis is lacking. This idea is particularly relevant since epigenetic changes are observed in many neurological and psychiatric diseases and most single-nucleotide variants (SNVs) identified in diseases-specific GWAS studies map to non-coding regions, implying epigenetic regulation of gene expression may underlie some disease etiologies. We are currently utilizing cutting edge techniques to define the chromatin state of different embryonic neurogenic regions to better understand epigenetic changes in distinct cell types during development, with the hope applying this knowledge to various neurodevelopmental diseases.

How the environment sculpts interneuron diversity and maturation

Interneurons undergo an extensive tangential migration period before reaching their terminal brain region, upon which they interact with the local environment to differentiate and mature. The composition of interneuron subtypes varies significantly between different brain regions. Numerous experiments indicate that general interneuron classes (e.g., PV- or SST-expressing) are determined as cells become postmitotic during embryogenesis, but when other features that define a mature interneuron subtype (neurochemical markers, cell type and subcellular location of synaptic partners, electrophysiology properties, etc.) are established remains unknown. One hypothesis is that interneuron precursors are not genetically predefined into specific subtypes, and it is only upon interaction with their environment that these plastic cells adopt their mature features. To test this idea, we are harvesting postnatal interneuron precursors in specific brain regions and transplanting them in new environments. This technique allows us to determine if transplanted interneurons adopt properties of the host environment (indicating a strong role for the environment in regulating interneuron diversity) or if they retain subtype features more consistent with the donor region. Our initial experiments indicate that the environment does play a significant role in determining the composition of interneuron subtypes in a brain region, but some subtypes seem to be more genetically predefined than others. In the future, we hope to combine this transplantation approach with other analytic techniques to more fully characterize how the environment sculpts interneuron diversity. 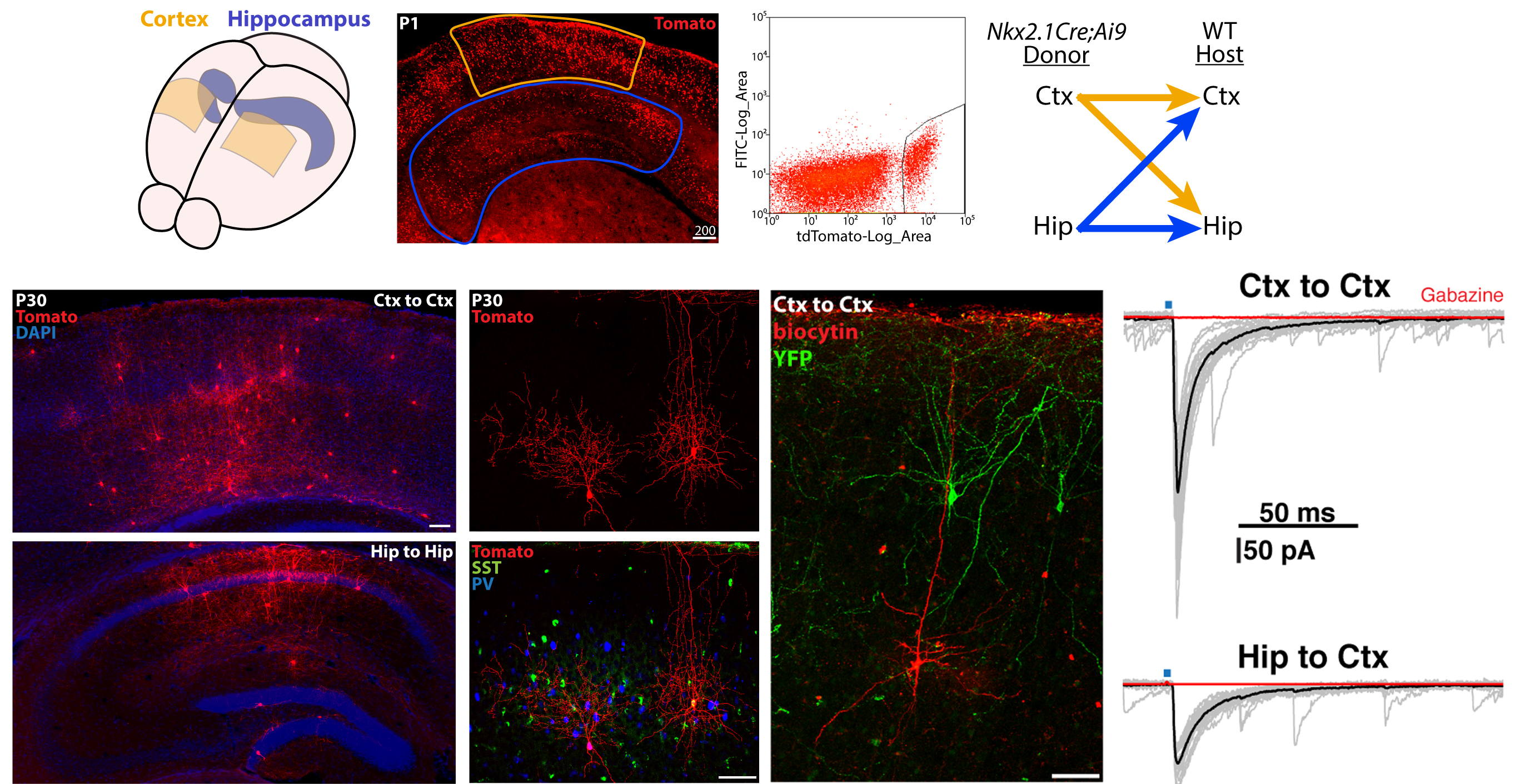 The ability to longitudinally track gene expression within defined populations is essential for understanding how changes in expression mediate both development and plasticity. Previous screens that were designed to identify PV+- and Sst+-specific genes were largely unsuccessful because several issues significantly hinder these types of studies. First, the MGE is a heterogeneous population of progenitors that gives rise to both interneurons and a variety of GABAergic projection neurons, making it difficult to segregate interneuron progenitors from other cell types. Additionally, many markers used to define mature interneuron subtypes are not expressed embryonically, and thus these class-defining markers are not helpful for studying MGE progenitors. In an ideal scenario, we would like to identify actively transcribed genes in MGE progenitors undergoing fate decisions while retaining the capacity to identify whether these cells become PV+ or Sst+ interneurons in the postnatal brain. To this end, we are developing a spatially and temporally inducible form of DNA adenine methylase identification (DamID) that will allow us to label the transcriptome of MGE progenitors. Labeled cells can be harvested at maturity when we have the tools to distinguish specific interneuron cell types, which will allow us to retrospectively look back in time to identify candidate fate determining genes expressed in specific interneuron populations. Our hope is that this strategy can be applied to any cell type son one could investigate the temporal gene expression pattern of their favorite cell type.