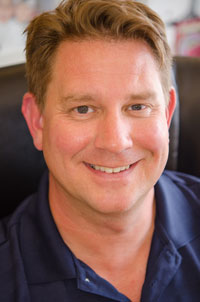 Dr. Dax Hoffman received his B.S. in Genetics from the University of Minnesota in 1994 and his Ph.D. from Baylor College of Medicine in 1999, where he studied dendritic K+ channels with Dr. Dan Johnston. During a postdoctoral fellowship with Dr. Bert Sakmann at the Max Planck Institute for Medical Research in Heidelberg Germany, he investigated synaptic plasticity and Ca2+ signaling in transgenic and gene-targeted mice. Dr. Hoffman became head of the Molecular Neurophysiology and Biophysics Unit, NICHD in 2002. His laboratory explores dendritic signal processing in CA1 pyramidal neurons of the hippocampus. 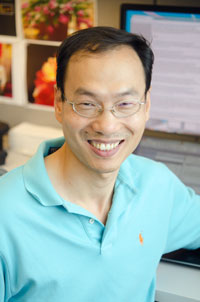 Jiahua earned his PhD in Cell Biology from Shanghai Institutes for Biological Sciences, CAS in 2003, where he studied the role of GABA transporters in learning and memory and neurological diseases. After his PhD, Jiahua joined the laboratory of Dr. Paul Worley at The Solomon H. Snyder Department of Neuroscience in Johns Hopkins School of Medicine, where he continued to study the mechanisms of neuronal plasticity. Jiahua was then recruited to the NIH in February of 2014 as a Staff Scientist. He is interested in dynamic regulations of synaptic ion channels and metabotropic receptors implicated in neuronal plasticity, excitability and psychiatric disorders with a combination of techniques including Tandem affinity purification-mass spectrometry, biochemistry, imaging and behavior. Jiahua was awarded NARSAD Young Investigator Grant in 2014-2015. 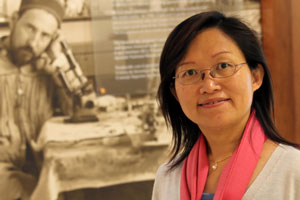 Lin obtained her MD degree at Tianjin Medical University. Afterward, before joining the Hoffman lab, Lin’s research focused on the trafficking and function of nicotinic receptors in CNS in Dr. Anand’s lab at LSUHSC, New Orleans. Then she moved to the NIH (the best place for research), to study the mechanisms behind transmembrane agrin regulation of dendritic filopodia and synapse formation in hippocampal neurons in Dr. Daniels lab. In the Hoffman lab, Lin’s current research focuses on the A-type K+ channels subunit Kv4.2 complex, including its auxiliary subunits (KChIPs and DPP6) which are important for its trafficking and neuronal excitability. The DPP6 gene has been associated with a number of human CNS disorders including ASDs and schizophrenia. Lin discovered a novel role for DPP6 in the regulation of dendritic morphogenesis, impacting hippocampal synapse formation and development. 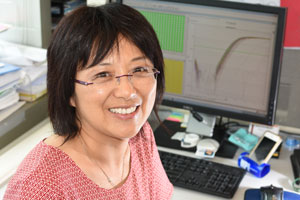 Ying received her MD in 1984 at Shanghai Medical University (current name Shanghai Medical College at Fudan University) where she also obtained her MS degree. She studied Pathobiology at University of Connecticut and obtained her MS in 1994. She did extensive research on molecular regulation of nuclear hormone receptors from 1994-1997 at Brigham and Women’s Hospital, Harvard Medical School. She worked at NIDDK and NICHD doing endocrine research on thyroid hormone receptors and CRH regulation from 1997-2013. After joined Dr. Hoffman’s lab, Ying’s current research focuses on the roles of A-type K+ channels subunit Kv4.2 with other ion channels in neuronal plasticity and excitability. 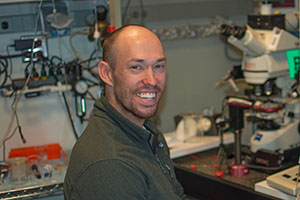 Cole received his bachelor’s degree in Biology from the University of Kentucky.  He remained at Kentucky to pursue his graduate degree and completed his Ph.D. in Biology in 2017 in the lab of Dr. Robin Cooper.  While in the Cooper lab, Cole’s primary research focus was on investigation of acetylcholine modulation of neural circuit function in the Drosophila melanogaster CNS.  He also studied activity-dependent plasticity in somatosensory circuits and made contributions to the understanding of mechanisms regulating Drosophila cardiac physiology.  His graduate work spurred a keen interest into enhancing knowledge of the contribution of ion channels in regulation of intrinsic excitability and plasticity in neurons and circuits.  He joined the Hoffman lab in the fall of 2017 where he switched to the mouse model and is currently using patch-clamp electrophysiology and imaging to investigate how the dynamic regulation of A-type K+ channels impacts dendritic excitability and synaptic plasticity. 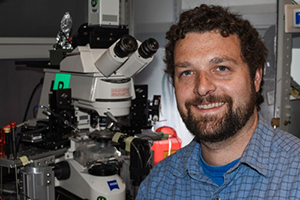 Jon received his bachelor’s degree in Biochemistry at the University of Oregon. At Oregon, Jon performed undergraduate research in Dr. Eric Selker’s lab where he cut his teeth studying eukaryotic epigenetics and genome defense mechanisms in the fungal model organism Neurospora crassa. After undergrad, Jon worked as a research technician at the Oregon Health & Sciences University under Drs. Roger Cone and Wei Fan where he studied the role of the melanocortin system in regulating metabolism in mouse models of obesity. Jon went on to complete his Ph.D. in Neuroscience at the University of Colorado, Anschutz Medical Campus in the lab of Dr. Mark Dell’Acqua. Jon’s thesis work established that L-type calcium channel function and excitation-transcription coupling in hippocampal neurons were regulated by local targeting of protein kinase A through the postsynaptic A-kinase anchoring protein 79/150. In the Hoffman lab, Jon investigates activity-dependent mechanisms regulating the expression, localization, and function of voltage-gated calcium and potassium channels in neural circuits related to learning and memory. 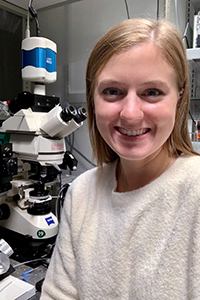 Meghyn received her bachelor’s degree in Biochemistry and Molecular Biology at Mercer University. She completed her PhD at Georgia State University in 2021 in Dr. Deborah Baro’s lab. In the Baro lab, Meghyn found Kv4.2 channels are post-translationally SUMOylated and characterized effects of Kv4.2 SUMOylation on channel expression and gating. Meghyn joined the Hoffman lab in August 2021, where she is using patch clamp electrophysiology to study activity-dependent mechanisms that regulate Kv4.2 function and expression in the hippocampus. Ashley studied Neuroscience at Bates College with a minor in Chemistry. Her general interest in neuroscience revolves around cellular physiology, as well as the processes that make learning and plasticity possible. In the future, she plans to attend a Neuroscience PhD program, and would love to eventually become a writer. 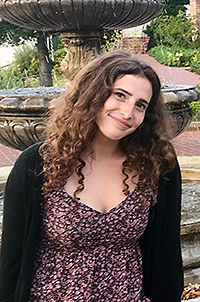 Maisie received her bachelor’s in Physiological Science at the University of California, Los Angeles. She is interested in studying various aspects of neuroscience including neural circuits associated with cognition and behavior as well as neurodegenerative diseases and neuroendocrinology. After working in the Hoffman lab, Maisie plans to attend graduate school to earn a PhD.