Human Immunodeficiency virus 1 (HIV-1), the causative agent of AIDS, delivers its RNA into cells by fusing the viral envelope with the cell membrane. This fusion process is mediated by the viral envelope glycoprotein Env, a trimer of heterodimers consisting of gp120 and gp41 subunits. Fusion is initiated by gp120 interactions with CD4 and one of the two GPCR coreceptors, CCR5 and CXCR4, at the surfaces of the target cells. In collaboration with Drs. Leonid Margolis and Gregory Melikian, we have found that HIV-1 binding to its receptors induces non-apoptotic exposure of PS at the surface of the target cell and that externalized PS strongly promotes Env-mediated membrane fusion and HIV-1 infection. Specific interactions between the gp120 subunit of Env and coreceptors triggered Ca2+ signaling-dependent TMEM16F-mediated PS externalization. Our findings suggest that cell-surface PS acts as an important cofactor that promotes the fusogenic restructuring of pre-fusion Env-CD4-coreceptor complexes. A similar promotion of Env-mediated fusion by PS and another anionic lipid phosphatidylglycerol suggests the importance of electrostatic interactions rather than specific interactions with the polar head group of PS. We propose that PS at the surface of the target cell lowers the minimal number of coreceptor molecules that need to be engaged by each Env trimer to initiate gp41 refolding. The uncovered link between HIV-1 infection and PS externalization identifies a bi-directional signaling pathway, in which the classic outside-in signaling through coreceptor triggers, via increase in intracellular Ca2+, inside-out PS externalization mediated by TMEM16F. Since disrupting the PS externalization pathway suppressed HIV-1 infection, this pathway may present a new target for anti-HIV-1 drugs. 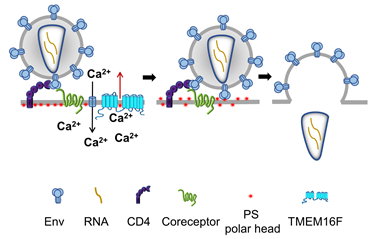