Molecular crowding by water-soluble polymers, such as poly(ethylene glycol)s, PEGs, has been employed in a wide range of inquiries into molecular structure and dynamics. Specifically, polymer partitioning into nanoscale cavities can sensitively probe surface hydration in application to molecular interactions in the crowded cellular environment. Metabolite-transporting beta-barrel ion channels reconstituted into planar lipid bilayers offer a useful model system for studying both polymer partitioning from multicomponent solutions and its osmotic action. Also, with conductance-fluctuation analysis we can access the dynamic side of polymer partitioning, allowing us to follow polymer transport at the single-molecule level which offers advantages over ensemble techniques. We apply osmolytes and polymers to study polymer behavior under conditions of strong confinement by the pores and to investigate water molecules rearrangements in complexation reactions. 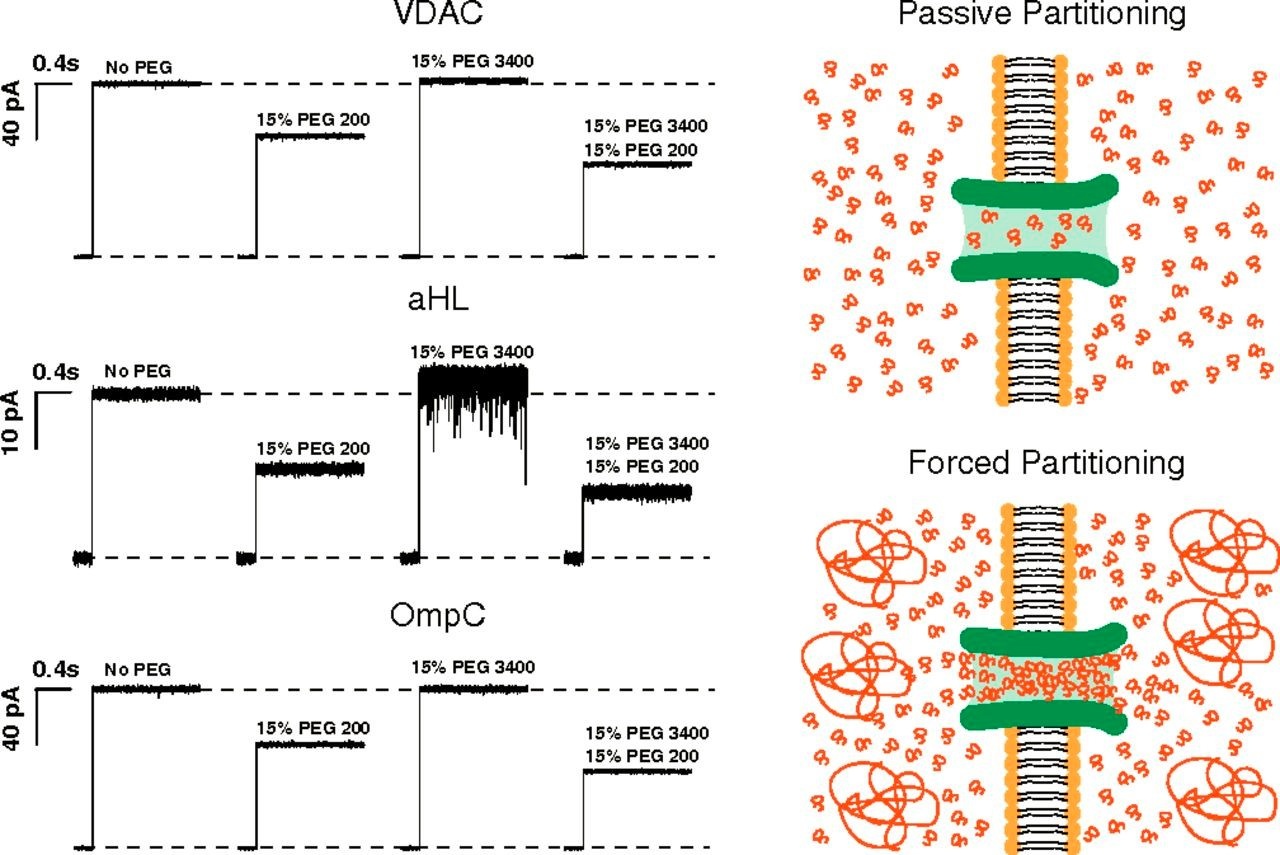 Figure 1. Polymer partitioning from semidilute solutions of PEG mixtures studied with a number of membrane-spanning β-barrel channels of different origin: the voltage-dependent anion channel (VDAC) from outer mitochondrial membrane, bacterial porin OmpC, and channel-forming toxin alpha-hemolysin. PEGs of molecular weight 200 (PEG 200) and 3400 (PEG 3400), and their mixtures in different proportions, were used. The results for the mixtures were rationalized within the “polymers-pushing-polymers” model of nanopore partitioning, based on the assumptions that the larger component of the polymer mixture, being preferentially excluded from the channel cavity, pushes the smaller component into it, thus representing forced polymer redistribution between the bulk and the channel volumes (from M. A., Aksoyoglu, R. Podgornik, S. M. Bezrukov, P. A. Gurnev, M. Muthukumar, and V. A. Parsegian. Size-dependent forced PEG partitioning into channels: VDAC, OmpC, and α-hemolysin.Proceedings of the National Academy of Sciences, 2016, 113: 9003–9008).

Figure 2.Using two different methods—small-angle neutron scattering (SANS) and nanopore conductance fluctuation analysis to quantify PEG parameters in the bulk and the degree of its partitioning into the pore of alpha-hemolysin channel. While SANS indicated very small decrease in polymer radius of gyration in 1-30% wt % solutions of PEG3400, current-fluctuation analysis on mixed large and small polymer samples showed that an osmotic “push” exerted by the larger PEG3400 is enough to selectively drive the smaller one, PEG 200, into the channel pore. For the 1:1 mixture of PEGs of 200 and 3400 molecular weight, and of total 30% w/w PEG concentration, the dominance of smaller PEG 200 in pore partitioning is such, that only 0.04 of pore volume is taken by the large PEG 3400. This selective drive of the small polymers can represent a new type of regulation of molecular transport, which may be of great importance in vivo, where a dense amount of biopolymers is packed into small cellular volumes (from P. A. Gurnev, C. B. Stanley, M. A. Aksoyoglu, K. Hong, V. A. Parsegian, and S. M Bezrukov. Poly(ethylene glycol)s in semidilute regime: radius of gyration in the bulk and partitioning into a nanopore.Macromolecules, 2017, 50:2477–2483).