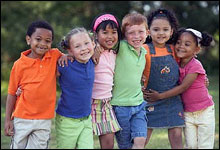 Together, however, they provide not only a cross-section of the U.S. population, but also represent the first two locations scientifically chosen to begin recruiting for the National Children’s Study.

Following years of intensive research and planning, the National Children’s Study launches its recruitment effort at these two Vanguard locations. The institutions affiliated with these locations include the University of North Carolina at Chapel Hill and the Mount Sinai School of Medicine in New York, which will both begin recruiting volunteer Study participants this week.

Study researchers at the National Children’s Study Center at the University of North Carolina at Chapel Hill will launch efforts in Duplin County, a large, sparsely populated, and rural area, by visiting a number of neighborhoods. Given the need to recruit a significant sector of the female population, this Study Center has been working closely with the local community advisory group to come up with the best strategy for encouraging participation in the Study, particularly among Hispanics, who represent a sizeable portion of the community.

Study researchers with the Mount Sinai School of Medicine in Queens will be tailoring their own strategies and tactics to reach out to their diverse community, at the opposite end of the spectrum from Duplin County in terms of population density, region, and culture. In Queens, a dense, urban community, the nearly 2.23 million residents speak more than 150 languages. Because of this unique diversity, the area provides a natural launching pad for the National Children’s Study recruitment.

The remaining five Vanguard Centers are expected to begin recruitment in April 2009. It is anticipated that each Vanguard Center will recruit approximately 375 women by the end of the 18-month long Vanguard cohort phase.

“The principal benefit of the National Children’s Study is that it will uncover important health information at virtually every phase of life,” said Duane Alexander, M.D., NICHD Director. “Initially, it will provide major insights into disorders of birth and infancy. Ultimately, it will lead to a greater understanding of adult disorders, which are heavily influenced by early life exposures and events. ”

Authorized by Congress in the Children’s Health Act of 2000, the Study is a collaborative effort involving many public and private partners committed to improving children’s health. The Study is led by a consortium of federal agencies, including the U.S. Department of Health and Human Services (the NICHD and the National Institute of Environmental Health Sciences within NIH, and the Centers for Disease Control and Prevention) and the U.S. Environmental Protection Agency.

To learn more about the National Children’s Study, its recruitment efforts, and its research, select one of the links below: