Saving Infant Lives Around the World 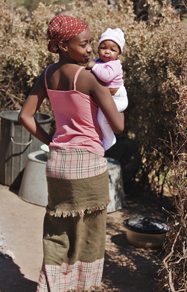 Recent research findings support the use of a seemingly simple solution to have a big impact on reducing these neonatal deaths, especially during the critical first seven days after birth. The study, conducted through the Global Network for Women’s and Children’s Health Research, which is funded by the NICHD and other sources, showed that training birth care providers on the basics of caring for infants and in resuscitation reduced neonatal mortality by 40 percent. The results of the study appeared in the October 13 issue of Pediatrics.

Many infants do not breathe on their own within the "golden minute"—the first 60 seconds after they are out of the womb. But some kind of stimulation can jump start independent breathing, which is why doctors used to smack baby’s bottoms (at least in the movies). Birth asphyxia—when a baby can’t start or maintain breathing on its own—is responsible for nearly 1 million neonatal deaths each year. In prior research, birth care providers who were not trained to recognize newborns that didn’t breathe immediately or to stimulate or resuscitate these babies, often think the infant is stillborn or already dead. This assumption could mean life-saving care isn’t tried and, as a result, the babies die. For this reason, research often addresses these deaths together because stillbirths are difficult to distinguish from neonatal deaths.

To address the major causes of infant death during the first seven days after birth—birth asphyxia, low birth weight and problems from preterm birth, and infections—in developing countries, the WHO created a program called Essential Newborn Care (ENC). ENC is designed to set minimum infant care standards for resource-poor countries and to educate and train midwives and birth care providers on evidence-based guidelines for newborn care. In addition, the Global Network created a neonatal resuscitation program as a way to reduce deaths specifically from birth asphyxia and tested the program in a large-scale trial called First Breath.

The recent study, conducted in 18 low-risk health centers in Zambia, Africa, implemented a "train-the-trainer" model in which midwives and other birth workers received a five-day course in ENC and the Global Network’s neonatal resuscitation program. The training included basic infant care techniques such as resuscitation, daily hygiene, how to keep infants warm, early and exclusive breastfeeding, "kangaroo" (skin-to-skin) care, and ways to recognize and address signs of infant distress and health complications. Research staff taught local health care workers how to collect data and assess infant health before data collection on births began. In all, the study followed more than 70,000 births.

The research showed that these low-cost interventions were effective in decreasing death rates from the major causes of death. The results showed that after staff received the training, the infant death rate during the first seven days after birth dropped from 11.5 deaths for each 1,000 births to 6.8 deaths per 1,000 births. In addition, deaths attributed to birth asphyxia were also reduced.

"The findings provide the best evidence yet that these two low-cost training programs, whether used in a community or clinic setting, are effective in combating infant mortality in the developing world, " said Waldemar A. Carlo, M.D., from the University of Alabama at Birmingham. Dr. Carlo led the research team along with Linda L. Wright, M.D., scientific director of the NICHD Global Network for Women’s and Children’s Health Research, and others.

Another recent study from the same team of researchers in the Global Network for Women’s and Children’s Health Research supported the findings of the train-the-trainer model for reducing stillbirth. They found that a basic three-day ENC training program reduced the rate of stillbirths in rural areas of six resource-poor countries by more than 30 percent. This study, which was published in the February, 2010, issue of The New England Journal of Medicine, tracked more than 120,000 births at health centers in Argentina, the Democratic Republic of Congo, Guatemala, India, Pakistan, and Zambia.

The results of both studies show that low-cost training in the essentials of newborn care can greatly increase infant survival in many developing countries.