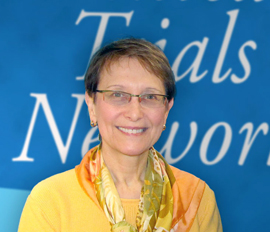 TBIs and concussions get a lot of attention in the news. In football players at all levels, repeated concussions have been linked to long-term health problems. Veterans have come back from wars with brain injuries caused by explosions. TBIs also happen in daily life. Children fall on the playground, and elderly people have balance problems that lead to more falls. As common as TBIs are, though, there is still much to learn about how to treat these injuries and how to deal with related problems over the long term.

Mary Ellen Michel, Ph.D., is the Program Director for the NICHD’s TBI and Stroke Rehabilitation Program, part of the National Center for Medical Rehabilitation Research (NCMRR). The Program supports research to better understand TBI and stroke and to develop and assess medical rehabilitation therapies and interventions related to improving function, quality-of-life, and outcomes for TBI and stroke patients.

In graduate school, Dr. Michel studied spinal cord injury in animals, doing basic science work on regrowth, reconnection, and plasticity in the nervous system. She started out at NIH 30 years ago, working on spinal cord injury at the National Institute of Neurological Disorders and Stroke (NINDS). Now she manages a portfolio of TBI and stroke rehabilitation research that includes basic science and more patient-oriented research, too.

We checked in with Dr. Michel to ask a few questions about her work. Here’s what she had to say.

What is the NICHD’s niche in TBI research?
How do most TBIs happen?
What problems do people with TBIs have?
What are major questions in this field?
What kinds of TBI research is the NICHD funding?
What interventions and treatments are being studied?
What are some exciting findings from NICHD-funded research?
What are the key areas of research on TBI for the next decade?
What do you find most surprising or challenging about this work?

TBI has received more attention as a major public health problem in recent years, and several NIH Institutes support research in the area. What is the NICHD’s niche?

There are two niches. One is rehabilitation. From the rehabilitation perspective, we’re looking at the chronic period after TBI—not necessarily what happens as a patient goes into the emergency room, but what are the issues after the brain is injured? How do you intervene to facilitate recovery?

The other is TBI in children, across the lifespan from neonates all the way to early adulthood—the brain is still plastic and developing through the early 20s. NICHD funds research in the early stages of development and the effect of brain trauma through the various developmental stages.

How do most TBIs happen?

The CDC reports that falls are the number one cause of TBI across the lifespan. The number two category they call “hit with or against an object.” That includes sports, or being hit by a car. Number three is motor vehicle accidents. Some of the more serious injuries happen as a result of assault, which is number four. With assault, the injuries are often much more severe. It’s particularly, and very sadly, an issue for the youngest children.

What are the particular problems that people with TBIs have?

For a mild injury or concussion, soon after the injury there might be headache, including migraine, balance issues, dizziness, or vertigo. There might be sleep disturbance or memory problems, or problems with vision. A patient might feel “a little off” or feel fatigued. If this goes on for weeks or months, it’s going to affect how someone does in school or at work.

For the more severe injuries, epilepsy is an issue. Some of the psychiatric diagnoses that have come after TBI include depression, post-traumatic stress disorder, and attention deficit/hyperactivity disorder. You’ll often see issues of executive function, so people can’t control their emotions or have trouble planning.

What are some of the major questions in the field overall?

Most TBI research at the NIH has been aimed at more severe injury and at the acute stages. The idea was to prevent chronic problems by treating someone very quickly in the emergency department or in the intensive care unit, just like you would treat a heart attack. But more than 30 trials in children and adults have failed to show any long-term benefit of emergency treatment for TBI.

So now the field is stepping back and doing research on how to do clinical trials. TBI is very complex. It can be mild, moderate, or severe. There’s the chronic stage, the acute stage. There are children and adults, men and women. There are people of various ethnic and racial groups. How exactly do we parse this into the bits and pieces that can be studied fruitfully? Does a penetrating injury have different health effects than a bump on the head? What types of outcome measures should be assessed?

In the meantime, people are being injured and there has to be research looking at all the consequences of those injuries. How can we help patients manage their cognitive decline or manage their anger (which can result from loss of executive function)? What do we do about sleep problems?

What kind of research is the NICHD funding on TBI?

In rehabilitation, we cover the three major types of research NIH does: basic science, translational research, and then clinical trials.

One exciting basic science study is on the role of nutrients in treating the deficits after TBI. This investigator is looking at three amino acids that the brain cells need to manufacture neurotransmitters, chemicals that carry messages in the brain. After a TBI, if they put these amino acids in the rats’ drinking water, the levels of the neurotransmitters go up and the rats make fewer errors in the maze. Now they’re trying it in humans.

We also have some research that has just been funded with a NIH Director’s New Innovator Award. One thing that is very difficult about TBI is that it is spread throughout the brain. There may be little blood vessel ruptures, or little ruptures of axons (nerve fibers that extend from neurons and transmit electrical signals) in the brain’s white matter. It’s hard to get a picture of what’s going on. This is a new investigator with a unique proposal: to use something she calls “nano-antibodies” to look at what areas of the brain and what types of tissue within the brain are affected.

What kinds of interventions or treatments are being studied?

We have ongoing clinical trials aimed at helping TBI survivors lead productive lives, have jobs, be in meaningful relationships, and keep their marriages going.

One particular issue is controlling anger. A group of investigators have a very standardized program that a therapist can use with a TBI survivor. The idea is for the person to become more aware of their feelings as well as other people’s feelings.

A lot is being done with computer-based interventions. We have some grants that use games to train people how to do more than one task at the same time. It can really help with driving.

There’s a large pediatric trial, co-funded with NINDS, looking at three domains of critical care: management of intracranial pressure, management of oxygen saturation, and management of nutrients. The investigators are following 1,000 children with severe brain injury for 6 months. At the end of the trial, we’ll have a stronger evidence base to inform how we care for critically ill children like this in the future.

What are some of the recent findings from NICHD-funded research on TBI that you’re most excited about?

Some people with a severe TBI are unconscious. There was a trial of the drug amantadine to improve the conscious state in these very severely injured patients. The drug promoted the patients’ functional recovery. They could actually wake up a little bit. They could participate in their recovery and help feed themselves.

That makes you wonder: for more moderate injuries, for people who don’t necessarily have a problem with consciousness, what could amantadine do? Maybe it could help you pay attention more. Maybe we should test it in those people. One positive result like this one helps lead to new research directions.

What are the key areas of research on TBI for the next decade?

There has to be research in the acute stage, treating and protecting the brain right after injury. The way TBI is assessed—mild, moderate, and severe—is pretty crude. We need to be able to assess who is going to get better.

Lots of investigators are looking at different types of biomarkers that could be used to see when the brain is injured and how the disease is progressing. The two big areas in biomarkers are imaging biomarkers and blood biomarkers.

TBI is often considered an injury to the long communicating axons that make up the white matter. There is a particular way to use magnetic resonance imaging (MRI) scans to look at these injuries. Investigators are also developing biomarkers for positron emission tomography (PET) scanning.

For blood biomarkers, researchers are looking at particular proteins that circulate when the brain is damaged. For these tests to work, it has to be proved that these proteins don’t appear normally in the blood—or, if they appear normally, that there is a normal range.

What do you find most surprising or challenging about this work?

For more information about TBI research, select one of the following links: