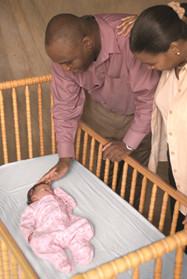 SIDS is the sudden, unexplained death of an infant younger than one year of age. It is the leading cause of death in children between one month and one year of age. In 2006, more than 2,300 infants died of SIDS in the United States.

The NICHD Spotlights for October—SIDS Awareness Month—highlight the Institute's activities related to SIDS. The first one focused on Timely Advice on Safe Infant Sleep: Research on Sudden Infant Death Syndrome (SIDS) and described the NICHD's research efforts and findings related to SIDS. The NICHD's portfolio on SIDS also includes outreach—involving communities in reducing SIDS risk. This Spotlight describes the Institute's activities related to SIDS education and risk-reduction activities, part of its multifaceted approach to understanding SIDS and eliminating it worldwide.

The NICHD has been conducting and supporting research to understand SIDS for many decades. In 1974, Congress passed the Sudden Infant Death Syndrome Act (Public Law 93-270), which not only placed the NICHD at the forefront of SIDS research, but also charged the NICHD with providing information to the public about SIDS and ways to reduce the risk of SIDS.

In 1993, before the Back to Sleep campaign began, the U.S. SIDS rate was 1.17 deaths for each 1,000 live births. By 2000, the U.S. SIDS rate decreased by about 50 percent to 0.62 for each 1,000 live births and has continued to decline. Although thousands of infants have not succumbed to SIDS, babies are still dying of SIDS, and rates in certain populations are much higher than the national average.

The NICHD's goal is ultimately to eliminate SIDS deaths, both in the United States and worldwide. To do so, the Back to Sleep campaign and the NICHD continue reaching out to various communities with safe sleep messages. A complete list of safe sleep messages is available through the Safe to Sleep Web site.

Using studies of health education and of SIDS outreach, campaign leaders discovered that response to safe sleep messages differs among different communities and ethnicities. To reach as many people with safe sleep messages as possible, the campaign has created several outreach efforts tailored to different audiences. For example:

Back to Sleep outreach no longer relies solely on in-person distribution of printed materials. Although the campaign still provides printed materials, it also uses various media formats to reach various audiences. For example:

In addition, the NICHD and leaders of the Back to Sleep campaign are constantly seeking ways to better understand what factors contribute to the success or failure of safe sleep outreach. For example, the Study of Attitudes and Factors Affecting Infant Care (SAFE) aims to better understand what makes people follow or not follow specific safe sleep messages related to infant sleep position, bed sharing, and pacifier use. SAFE focuses on understanding attitudes and barriers to behavioral change. Findings from this study will help the Back to Sleep campaign and other outreach efforts further refine their messages and their outreach methods to make them more effective and successful.

The NICHD will continue its multifaceted efforts to understand SIDS and eliminate it as a cause of infant death. The Institute will continue to support and conduct cutting-edge science to understand the causes of and contributors to SIDS as a way to move toward detection and possible prevention. At the same time, the NICHD will continue to refine the Back to Sleep campaign, its messages, and its outreach methods to most effectively reach all parents and caregivers with important safe sleep messages.