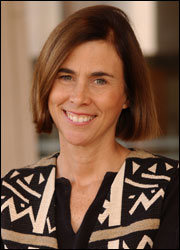 Dr. Jennifer Lippincott-Schwartz recently joined a distinguished group of American and international scientists when she was elected to the Institute of Medicine (IOM), the health arm of the National Academy of Sciences. Election to the IOM, which was established in 1970, is considered one of the highest honors in the fields of health and medicine. The IOM recognizes individuals who have demonstrated outstanding professional achievement and commitment to service. One of 65 newly elected IOM members, Dr. Lippincott-Schwartz was honored for her work and accomplishments in the field of cell biology.

Dr. Lippincott-Schwartz has studied under and worked with some of the most acclaimed scientists in the country. She graduated with honors from Swarthmore College in 1974. After several years of teaching, she went to Stanford University where she received her master’s degree in biology in 1979, working with Dr. Phil Hanwalt who is renowned for his research on DNA synthesis. She then began the doctoral program in biology at Johns Hopkins University where she studied under Dr. Douglas Fambrough, whose research led to significant advances in understanding proteins of the cell membrane. Her postdoctoral work in the laboratory of Dr. Richard Klausner, IOM member and former director of the National Cancer Institute, eventually led her to the NICHD, where she established her own laboratory. She is currently the chief of the Section on Organelle Biology within the Cell Biology and Metabolism Program in the NICHD’s Division of Intramural Research.

To analyze the behavior and interactions of molecules in cells, Dr. Lippincott-Schwartz uses live cell-imaging approaches. These approaches have changed the conventional view of “static” protein distribution and function in cells to a more dynamic view, with proteins in motion, localizing, diffusing, and interacting most of the time. Her most recent research efforts employ photoactivation localization microscopy, or PALM, a technology which allows her to “see” molecular distribution at the nanoscale (a nanometer is one billionth of a meter).

You can read about some of Dr. Lippincott-Schwartz’s science advances at:

In 2008, Dr. Lippincott-Schwartz was elected to the National Academy of Science, the parent organization of the IOM. She serves as editor for Current Protocols in Cell Biology and The Journal of Cell Science, and she is on the editorial boards of the journals Cell, Molecular Biology of the Cell, and Traffic. An active member of the scientific community, she currently serves on the Council for the American Society of Cell Biology and on the Executive Board of the Biophysical Society. With her election to the IOM, she will also serve on the Institute’s various committees and boards and will be active in various other IOM activities.

Those elected to the IOM go through a highly selective process that recognizes individuals who have made major contributions to the advancement of the medical sciences, health care, and public health. This new class of elected members brings the IOM total active membership to 1,610, with an additional 93 foreign associates and 75 members holding emeritus status.

The NICHD congratulates Dr. Lippincott-Schwartz on her well-deserved honor.