On the Road to Better Health in Mississippi

NIH Continues its Outreach in Jackson 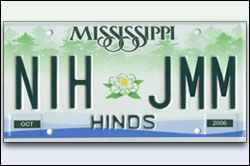 Because some communities throughout the United States aren't familiar with the NIH, they miss out on the valuable resources NIH offers in terms of health information and health practices. Institute staff at all levels conduct and support activities to reach out to various communities and partner with them to help improve the health of residents. Led by Yvonne T. Maddox, deputy director of the NICHD, a delegation from the NIH as well as state and local officials from Mississippi will convene in Jackson this week for a unique outreach event.

The NIH, in partnership with the Jackson Medical Mall, Thad Cochran Center, launches On the Road to Better Health-an effort to provide health information and resources to residents of Mississippi-on October 19, 2006.

One part of this event includes the opening of the NIH Health Information Center-an information and resource center featuring materials from NIH Institutes on topics including heart disease, diabetes, infant/child health, parenting, oral health, vision care, and other topics.

This unique partnership actually began in January 2006, when the NICHD, other NIH Institutes, and the Office of the U.S. Surgeon General took part in the 98th National Founders Day Celebration of the Alpha Kappa Alpha (AKA) Sorority, Inc. During the events, residents of Jackson and representatives from the community took part in round table discussions about the NIH Public Trust Initiative, which aims to help the public recognize and trust the NIH in funding, conducting, and overseeing research to improve the health of the nation. Rear Admiral Kenneth P. Moritsugu, M.D., M.P.H., (now Acting Surgeon General) spoke about the national priorities of the Office of the U.S. Surgeon General and commended service organizations, such as AKA, that help to achieve these priorities locally. Participants also enjoyed a pre-screening of Bringin' in Da Spirit-a documentary about the African American midwives who were involved in the Mississippi Health Project 1935-1941.

A centerpiece of both this week's and the January event is the Jackson Medical Mall, Thad Cochran Center. In the 1995, Dr. Aaron Shirley, Senator Thad Cochran (R-MS), and a group of Jackson residents converted the failed retail space mall into a major medical facility. Today, the Mall houses clinics, offices, and facilities of the University of Mississippi Medical Center, Jackson State University, and Tougaloo College. The Jackson Heart Study, a landmark 10-year study of cardiovascular disease in African American populations, is among the Mall's many tenants.

Among those taking part in this week's events are: Dr. Yvonne T. Maddox, deputy director of the NICHD; John Burklow, NIH associate director for Communications and other representatives from the NIH Office of the Director; Angelia Neal, National Eye Institute; Dr. Alexis Bakos, National Institute on Nursing Research; Dr. Aaron Shirley, Chairman of the Jackson Medical Mall Foundation Board of Directors; Dr. Ronald Mason, President of Jackson State University; Dr. Herman Taylor, director of the Jackson Heart Study; other state and local officials will also be in attendance. In addition to the Institutes listed above, the National Institute of Diabetes and Digestive and Kidney Diseases, the National Cancer Institute, and the National Heart, Lung, and Blood Institute are also involved in the partnership.

Select an image below to enlarge and read a caption.