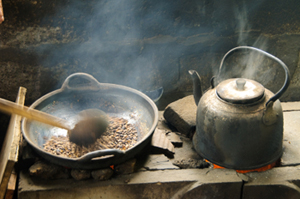 Indoor air pollution (IAP) from smoky, inefficient stoves leads to nearly 2 million deaths each year. It also affects more than half of the world’s population—about 3 billion people, most in resource-poor countries. IAP (also called household air pollution) from these inefficient stoves and fires also causes a wide variety of health problems, many of which are similar to those faced by someone who has smoked cigarettes for a lifetime.

The problem is so widespread that the World Health Organization cites indoor air pollution from cooking fires and stoves as the leading cause of environmental death in the world today.

The article complements efforts throughout NIH to raise awareness about the serious health impact of IAP and the need for cleaner, more efficient stoves and fuels throughout the world. The NIH has committed $25 million toward research on reducing IAP and promoting a cleaner, healthier future.

Dr. Martin, an author of the Science article and the associate director for prevention research and health promotion at the NICHD, leads the Institute’s efforts on IAP and health.  In May, Dr. Martin helped to organize a trans-U.S. government-sponsored international workshop on IAP and health. More than 150 researchers and policy makers met to discuss the state of the science, the research needs, and existing programs that offer clean-burning cooking technology.

The NICHD is also one of eight NIH Institutes, centers, and offices working with other parts of the U.S. government in the public-private partnership called the Global Alliance for Clean Cookstoves

.  Other agencies involved include the Department of State, the Office of Global Affairs within the U.S. Department of Health and Human Services, the U.S. Environmental Protection Agency, the Centers for Disease Control and Prevention, and the U.S. Agency for International Development. Launched as part of the United Nations Foundation, the Global Alliance aims to create a global market for clean and efficient cookstoves and fuels in the developing world. The Alliance’s “100 by ’20” goal calls for 100 million homes to adopt clean and efficient stoves and fuels by 2020.

For more information about NICHD-supported research and other efforts to reduce IAP, select a link below: