NICHD’s newborn screening program enters a new era—renaming a portion of its program after a remarkable child, expanding its goals, and creating partnerships 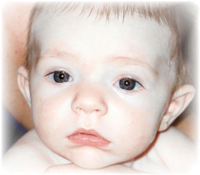 Every moment shared with your child is precious. Parents often reflect on this phrase as they watch their children grow and learn. For some parents, National Football League Pro Football Hall-of-Fame quarterback Jim Kelly and his wife Jill among them, this phrase is bittersweet. Every moment they had with their son Hunter (shown in the inset image as an infant), who died at age eight in 2005, was truly precious. After discovering that four-month old Hunter had Krabbe disease, one of the classic leukodystrophies, the Kellys sought to help Hunter fight this rare, degenerative, fatal muscular and nervous-system disease and to help him thrive. At the same time, they also reached out to others, raising awareness about leukodystrophies and encouraging universal newborn screening to ensure the earliest possible detection and treatment of these conditions. Today, the NICHD debuted its Hunter Kelly Newborn Screening Research Program in honor of Hunter and his family’s work.

The NICHD’s efforts in this research area are not new—the Institute has been committed to newborn screening research since its early days, with notable successes. In the 1960s, NICHD-supported researchers validated the effectiveness of techniques for detecting phenylketonuria (PKU), a metabolic disorder that was a primary cause of intellectual and developmental disabilities (IDD), and developed an effective and safe dietary intervention for the disorder. PKU became the first disorder for which newborn screening was mandatory in the United States. Today, infants with PKU begin dietary therapy at birth, ensuring normal metabolism and normal cognitive development. Institute-supported research also discovered techniques for detecting congenital hypothyroidism (CH), once a leading cause of IDD. By screening all newborns, CH is detected and treated before it impacts cognitive development. Both PKU and CH have been essentially eliminated as causes of IDD in the United States as a result of NICHD research and newborn screening.

Not all diseases detectable through newborn screening are as manageable as are PKU and CH, but the screening is still critical. By detecting disabling and potentially fatal conditions, such as Krabbe disease, newborn screening provides an opportunity for critical early treatment, sometimes before an infant even has symptoms of a condition. Early detection and treatment can have a profound impact on how severe the condition is or becomes, improving outcomes and quality-of-life.

Although there is no cure for Krabbe disease and few treatments, the Kellys lost precious time in their battle against Hunter’s disease while they waited for a diagnosis. Once they knew what they were up against, the Kellys began aggressive treatments and therapies to keep Hunter active and moving. Despite the disease’s attack on his body, Hunter’s spirit thrived—he communicated, learned, read, played the piano, and painted. He loved animals—especially horses—and loved his family and friends. Through their efforts and Hunter’s will, Hunter far surpassed the doctors’ estimates that he would live only 14 months—he and his family shared eight years together.

On October 13, 2009, the NICHD and NIH communities joined members of the newborn screening research community and the Hunter’s Hope

community—the foundation started by the Kelly family after Hunter was diagnosed—in inaugurating the Hunter Kelly Newborn Screening Research Program. In accordance with the Newborn Screening Saves Lives Act of 2008 (P.L. 110-204), the Program aims to identify new screening technologies and research management strategies for the conditions that such screening can detect.

The legislation also expanded the role of the Advisory Committee on Heritable Disorders in Newborns and Children, which was initially established in response to the Children’s Health Act of 2000 and is chaired by Dr. R. Rodney Howell, who serves as an advisor for the Hunter Kelly Newborn Screening Research Program for the NICHD. The Committee advises the DHHS Secretary about the application of universal newborn screening tests, technologies, policies, guidelines, and standards to effectively reduce morbidity and mortality in newborns and children who have, or are at risk for, heritable disorders.

In 2006, the Committee recommended to the DHHS Secretary that states adopt the Universal Screening Panel, a core panel of 29 primary conditions that was developed by the American College of Medical Genetics (ACMG). Since then, most states have rapidly implemented the Panel:

The Committee also developed a structured, streamlined, and public process for nominating a new disorder to the Panel that utilizes an independent, evidence-based review system.

Variability in newborn screening standards across states and the lack of infrastructure to connect existing resources are among the many challenges to efficient and effective universal newborn screening in the United States. To address these critical needs, the NICHD awarded a contract to the ACMG to develop the Newborn Screening Translational Research Network Coordinating Center (NBSTRN-CC) in 2008 to help establish the necessary infrastructure for research efforts in newborn screening. Research that the NBSTRN-CC will facilitate includes the development of new screening methods, the conduct of clinical trials for new therapeutic interventions, and longitudinal research on the long-term health of children identified through newborn screening programs. The Coordinating Center will complement the efforts of the Hunter Kelly Newborn Screening Research Program and other NICHD efforts related to newborn screening.

The NICHD’s efforts in newborn screening aren’t limited to the United States. In 2006, Dr. Elias Zerhouni, then Director of the NIH, traveled to Africa with an NIH delegation to discuss plans for collaboration and partnership in the Middle East and North Africa (MENA) region. Newborn screening emerged as one of the top health priorities for the region. Later that year, the NICHD partnered with the Ministry of Health of the Kingdom of Morocco and other organizations to hold Strengthening Newborn Screening in the MENA Region, in Marrakech, Morocco. The meeting brought together representatives from 18 countries in the region and 11 countries in Asia, the Pacific Islands, Europe, and North America and received support from 20 international public-private sponsors.

In 2008, the 2nd Conference of the MENA Newborn Screening Initiative: Partnerships for Sustainable Newborn Screening Infrastructure and Research Opportunities, held in Cairo, Arab Republic of Egypt, included more than 30 policy makers, health care providers, health ministry representatives, scientific experts, and family and advocacy representatives from 17 countries in the MENA region, Europe, Asia, and North America. Plans for a third conference, to be held in early 2010 at a site as yet undetermined, are ongoing.

Through the Hunter S. Kelly Newborn Screening Research Program, the NBSTRN-CC, the Advisory Committee on Heritable Disorders in Newborns and Children, and other national and international activities, the NICHD is continuing its commitment to newborn screening with a renewed focus. The Institute hopes that its efforts in the early identification and treatment of infants will help improve the outcomes for children like Hunter so that families like the Kellys can have more precious moments with their child.

For more information about newborn screening, select one of the resources below: