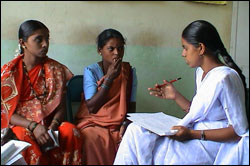 Research conducted through the Global Network for Women’s and Children’s Health Research has found that the drug misoprostol provides a safe, convenient, and inexpensive means to prevent postpartum hemorrhage, a major killer of women in developing countries. This finding again highlights that the NICHD’s mission to understand and improve the health of children, adults, and families reaches beyond the United States to include communities worldwide.

Postpartum hemorrhage is excessive bleeding experienced by the mother after giving birth. The condition can result from failure of the uterus to contract after detachment of the placenta or from ruptures or tears in the uterus and other tissues. In developed countries, where most births occur in hospitals and emergency care is available, deaths from the condition are rare. But, the condition can be life-threatening in countries where most births occur at home and emergency care is not always available.

"The researchers showed that giving women misoprostol after birth is a safe, inexpensive means to prevent postpartum hemorrhage from occurring," said NIH Director Dr. Elias A. Zerhouni. "This advance has the potential to save thousands of lives each year."

This study is significant not only for its findings about the treatment itself, but also because it addresses environmental factors unique to developing countries. Unlike the standard treatment for postpartum hemorrhage used in industrialized countries, misoprostol does not need to be kept cold, which makes it much more suitable for use in resource-poor settings where electricity and refrigerators are less common. Further, trained nurse-midwives can give misoprostol treatment to patients, thus eliminating the need for highly trained medical specialists, who are in short supply in many resource-poor settings.

This study was conducted with women in rural India and appeared in the October 7 Lancet, as part of its landmark series of articles on maternal survival—that is, the deaths of pregnant and recently pregnant women who died from causes related to their pregnancies.

To learn more about the NICHD Global Network for Women’s and Children’s Health Research, visit https://www.nichd.nih.gov/research/supported/globalnetwork.

On November 13-15, 2006, NICHD director Dr. Duane Alexander and a delegation from the NICHD and other NIH Institutes will participate in Strengthening Newborn Screening in the Middle East and North Africa, a conference being held in Marrakech, Morocco.

This conference brings together a group of experts and specialists in the field of newborn screening for genetic diseases with the primary goal of stimulating collaborative efforts in the arena of newborn screening between countries in the Middle East, North Africa, Europe, and the United States. Among their tasks, researchers, physicians, and policy makers from the region and abroad will create a baseline of knowledge regarding the occurrence of congenital disorders and will examine current efforts to screen for and treat these disorders in the region.

The conference, which is co-sponsored by the NICHD and the Directorate of Population and Health of the Ministry of Health of the Kingdom of Morocco, will include representatives from the National Institute of Neurological Disorders and Stroke, the National Institute on Deafness and Other Communication Disorders, the National Institute of Biomedical Imaging and Bioengineering, the Fogarty International Center, the NIH Office of Rare Diseases, the U.S. centers for Disease Control and Prevention, the Health Resources and Services Administration, Institut National de la Santé et de la Recherche Medicale, the European Commission, the American College of Medical Genetics, the National Newborn Screening and Genetics Resource Center, the March of Dimes, the International Society for Neonatal Screening, and other organizations.