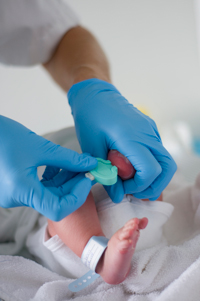 In 1963, Dr. Robert Guthrie and his colleague published a paper—A Simple Phenylalanine Method for Detecting Phenylketonuria in Large Populations of Newborn Infants—and his test ushered in a new era. It marked the first time newborns could be screened and receive treatment for a disease before symptoms even appeared. That same year, Massachusetts became the first state to pass a law requiring the Guthrie phenylketonuria (PKU) screening test for all infants born in the state.

Today, newborns in most states, the District of Columbia, and Puerto Rico are screened for at least 29 conditions within the first few days after birth. Ten states test for 50 or more conditions. Using a few drops of blood, newborn screening detects a treatable condition in about 1 in 300 babies born each year, a total of about 12,500 cases each year.

What Is Newborn Screening and How Did It Start?

Newborn screening is a public health program that tests spots of blood from all newborns for certain conditions that are not noticeable at the time of birth, but that can cause serious disability or even death if not treated quickly. Infants with these conditions may seem perfectly healthy and frequently come from families with no previous history of a condition.

Screening occurs within the first 24 to 48 hours after delivery. A “heel stick” provides blood drops that are collected on sterile, absorbent filter paper. Most states also include a hearing test in newborn screening, and many states also measure the amount of oxygen in a baby’s blood to identify infants who need to see a heart specialist immediately; neither test requires a bloodspot. To ensure accuracy, some states require a second blood test when an infant is 10 days to 2 weeks old.

Dr. Robert Guthrie invented a simple screening test for PKU, an inherited disorder in which the body cannot process phenylalanine (Phe), a protein building block. If not treated very early, PKU causes severe intellectual and developmental disabilities (IDDs), but by the time a baby shows the first symptoms, it can be too late to prevent these problems. Guthrie’s simple, inexpensive test detected the disease in the first few days of a newborn’s life. The test allows infants with PKU to be identified and then treated by feeding a low-protein diet and carefully controlling Phe intake, allowing for normal development.

The NICHD’s involvement in newborn screening goes back to the Institute’s earliest days in 1962. One of the NICHD’s earliest scientific successes in newborn screening came out of its Collaborative Study of Children Treated for Phenylketonuria, begun in 1967. This research showed the value of the low-Phe diet for preventing the IDD associated with PKU. In a follow-up study of the same subjects as adults, begun in 1998, NICHD researchers found that those who continued on the diet into adulthood had markedly fewer health problems and had IQs more similar to their parents than did those who had discontinued the diet. These projects confirmed the effectiveness not only of PKU treatments, but also the accuracy of the screening test in that those who were identified using the test were successfully treated.

As young women with PKU thrived and grew into adults, they also began to have children of their own. Research soon found that high levels of Phe in a pregnant woman’s blood could cause her child to have congenital heart defects, IDDs, and a condition called microcephaly, in which an infant’s head is significantly smaller than normal. The condition often indicates brain abnormalities. The NICHD-funded Maternal PKU Collaborative Study showed that women with PKU who ate the low-Phe diet starting before they conceived and controlled their Phe levels during pregnancy had healthy, normal babies. This treatment became the standard maternal care management plan for women with PKU who want to have children.

As late as 2002, states varied widely in the conditions included in their newborn screening programs and in the number of conditions for which they screened. The Health Resources and Services Administration (HRSA) Maternal and Child Health Bureau asked the American College of Medical Genetics (ACMG) to develop national newborn screening guidelines. The ACMG recommended a core panel of 29 tests, with another 26 tests included in a panel of secondary disorders. This became known as the Recommended Uniform Screening Panel (RUSP).

In 2003, the Secretary’s Advisory Committee on Heritable Disorders in Newborns and Children (SACHDNC) was formed to advise the Secretary of the Department of Health and Human Services on newborn screening.

Based on the Committee’s recommendation, the Secretary adopted the RUSP in 2010 and then added the newly recommended test for severe combined immunodeficiency to the core 29 conditions. Since that time, the Secretary also added congenital cyanotic heart disease to the RUSP core conditions, for a total of 31 conditions.

The NICHD Director represents the National Institutes of Health on the new Discretionary Advisory Committee on Heritable Disorders in Newborns and Children. This very active group continues to review new research, new tests, and determine if conditions can or should be added to the RUSP. More information is available in the SACHDNC 2013 Annual Report (PDF - 678 KB).

An early priority for newborn screening was to find simple tests, like the Guthrie blood spot test, for other conditions that, like PKU, caused serious problems if not treated very early, but were not visible at birth.

A significant advance came when NICHD-funded researchers found that a new technology called tandem mass spectrometry (MS/MS) could effectively be used for newborn screening. MS/MS links two machines that can inexpensively and accurately identify the fats and amino acids in a newborn’s blood while also measuring their amounts at the same time. This technology allows for the detection of more than 30 disorders using a few drops of a baby’s blood.

Massachusetts became the first state to adopt MS/MS into its newborn screening program in 1999, but other states soon followed. Today, most state screening programs routinely use MS/MS, making possible inexpensive screening for a wide variety of conditions. Some of these conditions could not be screened at all except for this technology.

The NICHD continues to support and invest in newborn screening with research that falls into four main areas:

The NICHD’s Newborn Screening Translational Research Network (NBSTRN), supported through the Intellectual and Developmental Disabilities Branch, works to provide infrastructure and resources for newborn screening research. These resources are intended to help investigators evaluate new tests for conditions, develop new screening methods and technologies, develop new therapies for conditions, and determine the long-term effectiveness of treatments. The Network also works to develop policies that support privacy and confidentiality and encourages research collaboration and the rapid communication of information.

As a result of this workshop, in 2012 the NICHD teamed up with the National Human Genome Research Institute (NHGRI) to fund a research program that applies genomic sequencing and analysis for newborn screening, but also investigates the ethical, legal, and social implications of such genomic research for individuals, families, and communities.

Just in time for the 50th anniversary of newborn screening, the NICHD and NHGRI announced four genomic sequencing awards to major research institutions around the country. Each new project will incorporate genomic sequencing into a pilot newborn screening project and at the same time, explore the potential legal, ethical, and social barriers to using genetic information in this way.

The ability to detect life-altering and life-threatening conditions very early in life means has made it possible to virtually eliminate many of these conditions as factors in child development, or drastically reduce or minimize their impacts on growth. As the United States celebrates 50 years of successful newborn screening, the NICHD continues to make investments that will help to lead newborn screening into its next 50 years.

For more information on newborn screening, select one of the following links: