Understanding Typical & Atypical Development: Research at the Heart of the NICHD Mission 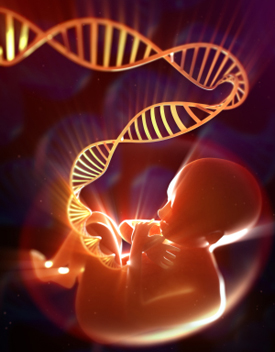 Birth abnormalities, also called birth defects, are a leading cause of infant mortality and disability. According to the March of Dimes, these abnormalities occur in 4.8% of or about 1 out of every 20 live births in the United States each year.

The NICHD was founded with the goal of conducting and supporting research on the underlying mechanisms of typical development as well as the causes and origins of atypical development. The Institute continues to support this part of its mission through many of its organizational units, including the Developmental Biology, Genetics, and Teratology (DBGT) Branch. The Branch supports research on the basic mechanisms of development, the genetics of birth abnormalities, and the development of model systems for research. Supported studies focus on development, from early embryonic stages through organ formation, in humans and other animals.

Informal networks of researchers from a variety of backgrounds and expertise often make research successes possible. In a recent finding, collaborating researchers funded by NICHD's DBGT Branch and other organizations discovered a gene associated with congenital heart defects and an inherited respiratory disorder known as primary ciliary dyskinesia (PCD). The researchers identified coiled-coil domain-containing protein 40 (or CCDC40), which plays a role in organ formation and respiratory function. Select a link below to learn more about the work that led to these findings.

A Mutation in CCDC40 Causes Heart Abnormalities in Mice and Zebrafish

Researchers often use animal models, such as fish and mice, to study genetic human diseases because the animals' genetic material is easy to manipulate and these animals are relatively easy to study in the laboratory.

Several years ago, Irene Zohn, Ph.D., now at Children's National Medical Center, was studying a gene mutation in mice that caused defects in the left-right placement of major organs like the heart and lungs. Her identification of this gene and its effect in mice was part of a larger study by Kathryn Anderson, Ph.D. (Sloan-Kettering Institute) and Lee Niswander, Ph.D. (University of Colorado, Denver), who were performing genetic screens in mice to identify mutations that caused observable changes in embryonic structures.

To learn more about the mutated mouse gene, Dr. Zohn contacted a colleague, Rebecca Burdine, Ph.D., at Princeton University, who was studying genes in zebrafish development that control establishment of left-right differences in the body. Dr. Burdine is a renowned expert in the study of organ development in animals and had found that zebrafish with a certain gene mutation had abnormal heart placement: the typical left-right placement of the heart was reversed. This reversal was similar to what Dr. Zohn had seen in her mice.

Dr. Burdine and her team found that the mutated gene that caused left-right position reversal in zebrafish was at the same location in the genome as the mutation causing heart reversal in mice. In addition, they found that mutation of this gene caused abnormalities in motile cilia function. Motile cilia are hair-like structures on the surface of cells that help move fluids. These cilia play a very important role in early development and later in organ function. This gene was CCDC40.

Dr. Burdine and her team examined the zebrafish with the CCDC40 mutation by transmission electron microscopy (TEM), which allows the precise visualization of very small structures. "I did the TEM of cilia in zebrafish where CCDC40 was mutated, and the pattern was really striking and something that I had not seen previously," she said.

Dr. Burdine sent her microscopy pictures of zebrafish to a friend and colleague, Heymut Omran, M.D., from the University Hospital in Freiburg, Germany. At the time, Dr. Omran was treating patients with PCD. In this disorder, the motile cilia lining the respiratory tract do not work properly, leading to frequent ear, lung, and sinus infections. Dr. Omran wrote back immediately saying that he had patients with cilia ultrastructure that looked identical to Dr. Burdine's microscopy pictures from zebrafish.

Dr. Omran and his team then examined PCD patients for mutations in the CCDC40 gene. Interestingly, they found that nearly two-thirds of their patient sample with cilia structural defects had mutations in the CCDC40 gene. Many of the patients with the mutation also had congenital heart defects and altered left-right heart reversal, suggesting that the mutation is also responsible for abnormalities in organ position.

Overall, the findings from this study suggested that CCDC40 is a critical determinant of organ positioning and respiratory health. The results provided evidence of a genetic link between the cilia-induced respiratory disorder PCD and the heart problems seen in patients with this disorder.

In this collaboration, the researchers worked with mouse and zebrafish animal models as well as patients with PCD to identify the role of CCDC40 in normal heart development and in the formation of motile cilia. The discovery of CCDC40 and its importance for development could lead to new treatments for conditions associated with this gene.

Communication and Collaborations Were Instrumental to the Work

The scientists working on this project who were funded by grants from the NICHD included:

For more information on DBGT Branch research and the NICHD, select one of the following links: