An Unexpected Benefit & A Cause for Concern

As global smallpox immunization programs were phased out because of their success, monkeypox moved in and is on the rise 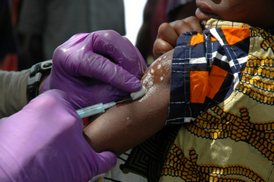 The global elimination of smallpox is one of the best known public health triumphs. Smallpox was a disfiguring and deadly disease caused by a very contagious virus. According to some health experts, smallpox was responsible for more deaths throughout history than all other infectious diseases combined. Although Edward Jenner discovered an effective vaccine against smallpox in 1796 and widespread immunization campaigns against the disease were enacted, smallpox remained a leading cause of death worldwide through the 1960s. Then, in 1980, the World Health Organization (WHO) certified that smallpox had been eradicated from the globe. With this proclamation, smallpox vaccination campaigns ended and resources for following the disease were sharply reduced.

An important—if unexpected—consequence of the worldwide campaign to eliminate smallpox was that it also helped to control monkeypox. Monkeypox—given the name because it was discovered in laboratory monkeys in 1958—is usually not as fatal as smallpox, killing only between 1 percent and 10 percent of those infected. But it is still a dangerous infection and there is no known cure. It can infect humans, monkeys, and other mammals and is caused by a virus closely related to the one that causes smallpox. It is this similarity that made smallpox vaccinations effective at also controlling monkeypox and other related diseases.

Beginning in 1981, the WHO sponsored surveys to follow cases human monkeypox infections in several areas of Africa. Because so few cases were reported, these surveys were stopped in 1986.

But that’s not the end of the story.

Investigators supported by the NICHD through the Global Network for Women’s and Children’s Health Research, a partnership with the Bill and Melinda Gates Foundation and other NIH Institutes and Centers, found that monkeypox is on the rise and is becoming a significant health problem, especially in the Democratic Republic of Congo (DRC) and other parts of the Congo Basin in Africa. The research suggests that monkeypox is 20 times more common today than it was 30 years ago.

"Monkeypox emerged under the radar due to the lack of surveillance," said Anne Rimoin, Ph.D., M.P.H., from the University of California Los Angeles School of Public Health School who led the NICHD-funded research.

The new survey, conducted from November 2005 to November 2007 in several health zones in the DRC, went back to the same areas covered in the WHO surveys of the 1980s, allowing for direct comparisons of data. The findings were alarming:

Most of the cases reported to Rimoin and her colleagues were in rural villages in or near a forest. Poverty, conflict, poor infrastructure, and other problems in the DRC left people more reliant on local sources of protein. This could partially explain the higher incidence among young males, that hunted small mammals and monkeys for food. The researchers added that the possibility of human-to-human transmission might also increase because whole households are now unvaccinated. This type of transmission could sharply increase the incidence of the disease.

Although the survey focused on the DRC, monkeypox can affect people in any location. In 2003, an outbreak of monkeypox infected nearly 100 people in the United States. The disease was traced back to infected African rodents that had been imported to the American Midwest; these rodents infected American prairie dogs, which then infected humans. So the potential exists for monkeypox to impact locations around the world, both rural and urban.

"Right now monkeypox is a rural disease, but the potential has increased for it to become an urban disease," said Dr. Rimoin. "Our study is a great warning bell that we will see more pox viruses emerging in humans."

Dr. Rimoin and her colleagues also believe that the actual occurrence of monkeypox is much higher than what was shown in their survey because they could confirm only active cases with the techniques available and could not get to all that were reported. Based on their findings, the researchers are calling for renewed active surveillance of monkeypox, as well as additional studies and long-term followup. Dr. Rimoin has received support for this and other research from the NICHD, the National Institute of Allergy and Infectious Diseases, the Fogarty International Center, the NIH Office of AIDS Research, and the National Center for Research Resources.

For additional information, select one of the links below: