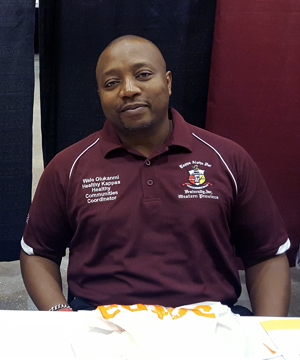 Wale Olukanmi has spent more than two decades as an oncology nurse and physician's assistant at Children's Hospital Los Angeles. As a medical practitioner and father of four, he thought he was well-informed about the health risks and pitfalls of parenting. Then, he completed an all-day training on safe infant sleep practices, where he learned about Sudden Infant Death Syndrome (SIDS), the leading cause of death in babies one month to one year of age, and about other sleep-related infant deaths, such as suffocation.

"I could have been the one to lose my baby," he said. "It really shook me up."

The training was part of a newly launched Fatherhood Initiative between NICHD and the Kappa Alpha Psi Fraternity that will equip hundreds of Kappa members to lead trainings across the country on safe infant sleep. These Kappa trainers will then educate thousands more members across the country about safe sleep messages, including:

The goal of the initiative is to promote recommendations of the American Academy of Pediatrics (AAP) and the messages of the NICHD-led Safe to Sleep® campaign. A recent NICHD-funded study emphasizes the need for this information, finding that many physicians aren't giving new mothers basic facts about safe infant sleep, breastfeeding, or immunizations.

Safe to Sleep® has long been working within African American communities to share safe sleep messages as a way to address a deadly disparity: African American babies die from SIDS at significantly higher rates than most other ethnic groups. Their SIDS rates are more than double those of white babies and more than three times that of Hispanics. But this new initiative is unique in that it focuses on African American men and highlights the importance of their role as parents.

"Fathers have traditionally been excluded from the dialogue about safe sleep, but a growing number of dads are staying home to care for babies," said Lorena Kaplan, MPH, CHES, who leads safe sleep activities for NICHD. "We know that this is an audience we need to engage now more than ever. Babies are safest when everyone in the household knows on how to care for them."

At the training, Wale watched a video produced by Cradle Cincinnati

, a nonprofit dedicated to reducing infant deaths. The video featured parents who had lost their babies to SIDS. Some of the parents described doing exactly what Wale had done with each of his four children: Falling asleep with the baby on its stomach, resting on his chest.

The stories he heard from other parents got him thinking: Perhaps his youngest brother died from SIDS. Wale was 15 when his twin brothers were born in his homeland, Nigeria. Within a year, one of the boys died, unexpectedly and suddenly. In medical school, Wale remembers learning about many diseases, but SIDS was the unspoken condition, he said. It was also unspoken at home, he said.

"Before, I was not aware of putting babies on their backs or what a safe sleep environment looked like," Wale said. He has already brought the information back to his hospital. "Now, I don't wait for parents to ask, any chance I get I tell them."

Each year, about 3,500 infants die from SIDS and other sleep-related causes, according to the Centers for Disease Control and Prevention. The goal of the NICHD–Kappa Fatherhood Initiative is to train 20,000 members over the next year.