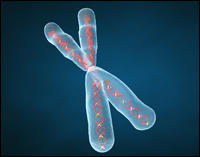 In 1991, NICHD-supported scientists discovered the gene that causes Fragile X syndrome (FXS) on the X chromosome, ushering in a new era of research on both the gene itself and on its then newly discovered mechanism for inheritance. More recently, researchers identified two disorders—Fragile X-associated Tremor/Ataxia syndrome (FXTAS) and Fragile X-associated Primary Ovarian Insufficiency (FXPOI)—that are related to the gene that causes FXS, but that have features and symptoms vastly different from FXS. Researchers working for and with support from across the NIH have made significant advances in the understanding of FXS and the associated disorders FXTAS and FXPOI. Now, a new research plan on these three disorders will give scientists around the country a new tool to better coordinate their research.

In 2007, the Trans-NIH Fragile X Research Coordinating Group was established to coordinate research efforts among NIH Institutes on:

In response to a request from the Senate Appropriations Committee, the Group convened a series of meetings with scientific experts, advocacy groups, including the National Fragile X Foundation

and the FRAXA Research Foundation

, representatives for affected individuals and family members, and other federal agencies to develop comprehensive recommendations for specific, high-priority research objectives on FXS, FXTAS, and FXPOI. These recommendations, outlined in the newly issued NIH Research Plan on FXS and Associated Disorders, are designed for the NIH, for the FXS, FXTAS, and FXPOI research communities, and for other federal agencies and institutions to coordinate research activities that will lead to timely detection, diagnosis, treatment, and prevention of these disorders.

The Coordinating Group and the NIH Research Plan on FXS and Associated Disorders represent a continuation of efforts by the NIH, the scientific community, advocacy associations, and other federal agencies to make the most of every research opportunity to enhance health among people in the United States and throughout the world.

or the FRAXA Research Foundation

For more information about FXS, its associated disorders, and the new research plan, select one of the links below: