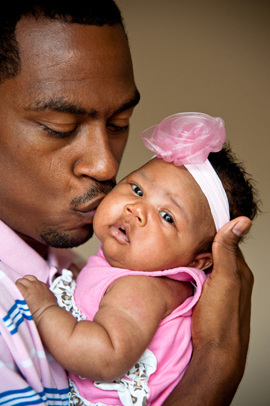 , the free service that texts important health information to expectant and new moms, will now offer messages for dads, too!

The enhanced text4baby delivers important information about pregnancy, baby’s first year, and the importance of dads’ involvement in their children’s lives directly to the cell phones of moms, moms-to-be, dads, and soon-to-be dads who sign up for the free service.

Decades of research—some of it from the NICHD—shows that having an actively engaged father improves outcomes for children, including better cognitive and language development, better self control, positive social and emotional behaviors, and better grades. These benefits last well beyond childhood. Research shows that the opposite is also true: children whose fathers are not involved in their lives are more likely to be involved in dangerous or unhealthful behaviors and to be negatively influenced by their peers.

Research also shows that an actively engaged father can also help improve the well-being of moms and dads. So some messages will promote positive ways to co-parent, with the aim of enhancing the relationships between parents as well as between parents and their children. Other messages will include tips for dads about how to support moms, and information for moms about encouraging bonding between dads and babies.

The expanded program aims to capitalize on the positive results demonstrated by text4baby, which has amassed more than 550,000 subscribers and sent more than 62 million messages since it launched in February 2010. The text4baby program has been effective in not only communicating health messages, but also at influencing behavior in moms and moms-to-be. Including messages for dads and dads-to-be could broaden the program’s positive effects on child well-being. Learn more about the first three years of the text4baby program’s success here XLNT! The Text4baby Program Celebrates 3 Years.

The NICHD is one of the original partners in text4baby

, a public-private partnership of more than 100 local, state, and national organizations dedicated to maternal and child health led by the National Healthy Mothers, Healthy Babies Coalition

The health information that moms and dads will receive through the expanded text4baby program can help put them on the path to becoming supportive, nurturing parents.

For more information about the text4baby expansion and related efforts, select one of the following links: