As a Follow Up to National Preeclampsia Awareness Month, the NICHD Highlights Some of Its Research on Preeclampsia 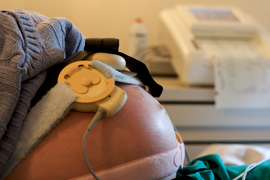 Preeclampsia is a condition in which a woman with previously normal blood pressure develops high blood pressure at 20 weeks of pregnancy or later. It can be life-threatening and can lead to serious short- and long-term health problems for the mother and her fetus.

Although the exact number of pregnancies affected by preeclampsia is not known, estimates suggest that the condition occurs in about 4% of pregnancies in the United States. The numbers are higher worldwide.

In May, the Preeclampsia Foundation

to raise awareness about the condition and its symptoms. As a follow up to those efforts, the NICHD highlights its research on preeclampsia, including its mechanisms and possible prevention and treatment.

NICHD research aims to improve understanding, detection, prevention, and treatment for preeclampsia, as a way to improve pregnancy outcomes and long-term health for women and their babies.

Some efforts to understand preeclampsia focus on risk factors and causes (or mechanisms). Understanding the “how” and the “why” of the condition could provide effective ways to prevent it from occurring or to slow its progress. Evidence shows that certain factors, such as pre-pregnancy obesity or a first pregnancy, put women at higher risk for the condition. A recent NICHD spotlight described some of the Institute’s specific studies on the risk factors for preeclampsia, including studies on reducing risk.

Although researchers don’t yet know the exact cause of preeclampsia, they are making progress.  Research on the biological mechanism(s) has shown that preeclampsia is highly associated with reduced blood flow to the placenta—the connection between the mother and the fetus—as a result of the failure of placental cells to increase the size of mother’s blood vessels in the uterus during early pregnancy. This is a very active area of research, and a number of biological factors involved in this process have already been discovered. The current and widely accepted explanation for preeclampsia is that the placenta, in response to an inadequate blood supply, releases substances into the mother’s blood vessels that damage them sufficiently to cause the disease. This is also an active area of research, and scientists have already identified a number of these substances.

Institute research also aims to identify biological markers that might signal a woman is going to develop preeclampsia and possibly how severe it might be. These predictors could provide health care providers with an important window for addressing some of the symptoms of preeclampsia before they become severe. Some evidence suggests that an imbalance of two specific proteins may be markers of preeclampsia. A recent NICHD spotlight explained these and other studies of molecular markers of preeclampsia.

Currently, the only cure for gestational preeclampsia is delivery. But this process may be risky for both mother and fetus, especially if the preeclampsia occurs early in pregnancy. So identifying safe and effective ways to control the symptoms of preeclampsia to allow for more time in the womb would be significant progress for preeclampsia research. Some Institute research on treatments for preeclampsia includes studies of pravastatin, a member of the drug class statins, which are used to lower cholesterol. You can view the results from one such study at http://www.ncbi.nlm.nih.gov/pubmed/23344286.

Other research supported by the NICHD is examining the role of autoantibodies—proteins made by the immune system that target the body’s own tissues—in preeclampsia and possible ways to block the production of these proteins as a way to prevent or treat the condition. You can review the results from one NICHD-supported study on this topic at http://www.ncbi.nlm.nih.gov/pubmed/23283357.

NICHD research on preeclampsia and on other disorders of pregnancy focuses on promoting healthy outcomes for mothers and infants, both during the pregnancy and immediately after birth as well as later in life. This research complements studies on the processes of normal pregnancy and fetal growth to provide evidence about the entire spectrum of pregnancy outcomes.

and the Promise Walks for Preeclampsia