Focus on Children's Mental Health Research at the NICHD 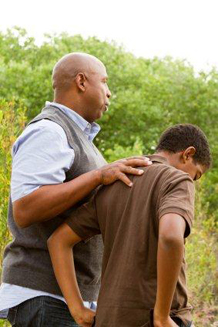 Children's health and human development includes more than just physical and physiological changes. Mental and emotional health and well-being are as important to a child's development. Such factors as exposure to violence, parental occupation and stress, special health care needs, injuries, and exposure to illicit and prescription drugs can have long-lasting effects on children. Addressing the needs of children with or at-risk for mental or emotional health issues can help improve their quality of life through adolescence and adulthood.

The NICHD investigates a wide range of children's mental and emotional health topics. From the effects of exposure to violence to mood changes associated with attention deficit hyperactivity disorder (ADHD) medications, NICHD investigations examine issues that shape children's mental and emotional health and that of their families.

The NICHD research in this area is guided by the idea that a child's development is complex and reflects the interactions of individual differences in genetics, cognition, and environment. Select a link below to learn more about NICHD-supported research on children's mental health issues.

In many areas of the world, exposure to violence, including mass violence such as terror attacks and combat, are common for children and families.  A major goal of NICHD research is to learn more about how this kind of exposure—direct or indirect—influences children's mental health and development. Researchers aim to improve understanding of mass violence's effect on children and of how parental exposure to violence affects children, particularly those whose parents are first responders, such as police officers, fire fighters, and emergency medical technicians (EMTs).

In an ongoing longitudinal study, NICHD-supported researchers are studying the effects of mass violence in New York City and Tel Aviv, Israel, on children's mental health. The study includes two cohorts of children ages 9 to 16, and each sample will also include control families.

The New York City group will include 900 families selected from the 71,000 individuals who enrolled in the WTC Health Registry in 2003 and 2004. Many registrants completed multiple baseline surveys, which will be a useful resource for this study. The Tel Aviv cohort will comprise 350 families. Using in-person, baseline interviews with children and family members, as well as 12-month follow-up interviews, researchers will determine the mental health status of all participants. They will also evaluate the effect of disaster preparedness education, which is commonplace in Israel and is becoming more common in New York City, on children's mental health status and sense of safety. For more on this study, visit http://www.ncbi.nlm.nih.gov/pubmed/19484384.

Lengthy deployments or multiple tours of duty take a toll on children's and family members' mental health. Past studies on this topic recognized that the most difficult period for a child is during the parent's absence, but ongoing research  reveals many other effects of long term and multiple deployments..

One NICHD-funded study examined how parental combat deployment affected the mental health of children ages 6 to 12, with a focus on children's behavior and emotional functioning. Researchers interviewed 272 children with an active duty or returned Army or Marine Corps parent.,  The researchers found that a parent's combat deployment has an adverse effect on children that increases the longer the parent is away.

But, contrary to previous research findings, this study showed that children's reactions to a deployed parent are more complex than originally assumed in that their anxiety levels can remain high even after the parent has returned. One-third of children in the study reported "clinically significant" levels of anxiety (meaning their anxiety was severe enough to warrant attention from a health care provider), regardless of whether their active duty parent was currently deployed or at home. Determining the relationship between the deployment of a parent and specific childhood behaviors is important and can help shape interventions to support military families and help ease family distress. For more on these findings, visit http://www.ncbi.nlm.nih.gov/pubmed/20410724.

Because children spend a significant amount of their time in a school or education environment, understanding the complex interactions between that environment and children's mental health can provide important information to parents, educators, and other school personnel.

These findings suggest that educators and behavioral and mental health professionals need to collaborate to ensure that children with special health needs—physical or behavioral—fare as well as their typically developing peers. For more on this study, visit http://www.ncbi.nlm.nih.gov/pubmed/21788226.

As families and communities struggle to deal with bullying and keep children and teens safe, bullying itself is becoming more complex as it moves into online and digital platforms. An emerging form of bullying—called cyber bullying—has increased with the use of the Internet, e-mail, mobile devices, and social media sites.

NICHD-funded research published in the Journal of Adolescent Health found that those bullied electronically—such as by computer or cell phone—are at high risk for depression. Even more surprising, the research showed that the cyber bullies—the ones doing the bullying—were at higher risk for depression than were the children who were bullied. Read more about these findings in the NICHD news release: Depression High Among Youth Victims of School Cyber Bullying, NIH Researchers Report.

The NICHD supports research on bullying and children's mental health and participates in other government-wide activities aimed at stopping bullying and improving outcomes for those who are bulled. For a description of these activities, please visit the NICHD spotlight: Taking a Stand Against Bullying.

Stress and Prenatal Exposure to Cocaine

In this study, researchers observed a decreased cortisol response in children who had been exposed to cocaine prenatally. While previous studies focused only on infants, this study collected data on 743 children from birth to age 11, testing the cortisol response to stress in samples of saliva. This allowed the scientists to weigh environmental factors such as poverty, violence, and parental influence. The most significant decrease in cortisol response was detected in children who were both exposed to cocaine prior to birth and exposed to domestic violence at any time since birth. This report of a decreased cortisol response in these children provides further evidence not only of the effects of prenatal drug exposure, but also the possible persistence of those effects well into childhood. For more information, visit http://www.ncbi.nlm.nih.gov/pubmed/20400094.

Looking into the Long-Term Effects of Head Injury

Recent investigations have shown the health dangers that can result from multiple concussions and head injuries of varying severity. Brain injuries are increasingly viewed by public health specialists as complex with the potential for lasting effects. According to the Centers for Disease Control and Prevention (CDC), traumatic brain injury (TBI) is the leading cause of acquired disability in children in the United States. While information exists about cognitive and behavioral problems during the acute phase of TBI, there is little information about patterns of behavioral problems over time after injury in young children.

In an NICHD-funded study, researchers examined the behavioral effects on children, ages 3 to 7, during the 18 months following a TBI. Investigators examined levels of internalizing, externalizing, ADHD-like symptoms, executive functioning, and social competence in children following TBI, compared to children with orthopedic injuries. They also examined environmental factors related to these outcomes to understand how these factors influence behavioral recovery and to identify potential targets for intervention.

The study, published in Rehabilitation Psychology in 2010, included children who were hospitalized for severe TBI, moderate TBI, or orthopedic injuries. Researchers followed up with these children shortly after injury and again at 6 months, 12 months, and 18 months after injury. Behavioral parent self-reports, demographic data, family functioning reports, and home environment reports were collected. The study showed that compared with the orthopedic injury group, the severe TBI group developed significantly more externalizing behavior problems and executive function problems following injury that persisted through the 18-month follow-up. Study findings suggest that predictors of clinically significant problems include permissive parenting, family dysfunction, and low socioeconomic status. For more information on these findings, visit http://www.ncbi.nlm.nih.gov/pubmed/20175634.

Investigating the Effects of Medication on Preteens

Since 1990, the use of methylphenidate-based (MPH) drugs to treat ADHD in children and adults has greatly increased. After some research suggested that MPH caused chromosomal changes in children, NICHD-supported researchers sought to gather  additional evidence on the issue.

In a study published in the Journal of the American Academy of Child and Adolescent Psychiatry, researchers treated 47 children, ages 6 to 12, with either MPH or amphetamines (another common class of ADHD medication) for 3 months. These children, who were not previously medicated for ADHD but met the Diagnostic and Statistical Manual for the Classification of Mental Disorders, Fourth Edition (DSM-IV) criteria for such treatment, provided blood samples pretreatment and 3 months post-treatment. Researchers examined their cells and found no genetic changes in either treatment group, an important finding giving the widespread use of both medication types. More information on this study is available in the NICHD news release: ADHD Medications Do Not Cause Genetic Damage in Children.

The NICHD is also conducting research to improve understanding of the appropriate use of lithium for the treatment of children. The study, which was split into two multiphase, multicenter trials, is examining the use of lithium for treating bipolar I disorder in children ages 7 to 17 years. The first trial, completed in April 2009, examined the maximum tolerated lithium doses for that age group. The second trial, still ongoing, is examining the effectiveness and long-term safety of using lithium for treating this age group. The second trial also examines the effects of lithium treatment over time, specifically on cognitive function and on preventing the recurrence of mood symptoms. For more information on these clinical trials, visit Lithium for the Treatment of Pediatric Mania [Trial 1] and Safety and Efficacy Study of Lithium for the Treatment of Pediatric Mania (Lithium2) [Trial 2].

For more information on NICHD children's mental health research, select one of the links below: