For 20 years, the Center has provided a focal point for federal efforts in medical rehabilitation research 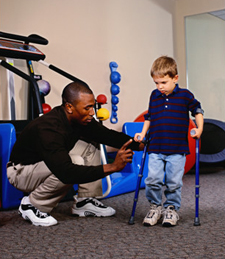 Disabilities—from a disorder, such as spina bifida; a health condition, such as a stroke; or an event, such as a motor vehicle collision—are simply a fact of life. Nearly all of us are affected by disabilities in some way, whether directly, as one of the estimated 54 million people who reported a disability in the United States last year, or indirectly, as a caregiver, family member, or friend of someone with a disability.

Two decades ago, when congress passed the Americans with Disabilities Act (ADA) (P.L. 101-336), communities had much work to do to help people with disabilities fully participate in the world around them. The Act and related laws helped to recognize and ensure the rights and needs of those with disabilities and led to many of the accommodations we are familiar with today—from ramps to captions to hand controls for automobiles.

For the NICHD, the Act further reinforced the need for more expansive research as a way to improve the lives of those with disabilities and their families. In 1991, the NICHD established the National Center for Medical Rehabilitation Research (NCMRR) to become the primary entity for medical rehabilitation research within the NIH and the federal government. Since then, the Center has helped to advance scientific knowledge about disabilities and rehabilitation, while also providing vital support and focus for the field of medical rehabilitation to help ensure the health, independence, productivity, and quality of life of all people.

Over the last 20 years, the NCMRR made significant contributions to the research field and enhanced the lives of people affected by disabilities. This article, the first of two NICHD Spotlights commemorating the Center's 20 years, highlights the establishment of the NCMRR and the state of rehabilitation science at that time. The second Spotlight, which will be posted later this month, will highlight the NCMRR's various research programs and advances in the field of medical rehabilitation research.

The field of physiatry or medical rehabilitation was officially recognized as a medical sub-specialty in 1946, mostly as a result of efforts to help soldiers from World War II recover from injuries. With a focus on maximizing functional abilities to improve physical and mental health, physiatry soon expanded beyond just the use of orthotics, prostheses, and assistive devices to include occupational, physical, and cognitive therapies and use of medication to help alleviate or control symptoms.

The NICHD was established in 1962 with the need to understand disabilities, specifically Intellectual and Developmental Disabilities (IDD), as a primary focus. Through its establishment and support, the Institute helped to create the field of IDD research. Knowledge about IDD was not only important for understanding the conditions themselves, but also for understanding more general aspects of human growth and development. Much initial research focused on establishing research infrastructure and understanding the causes and courses of various IDDs. Studies then expanded to find ways to address disabilities, including ways to improve the health and the quality of life of those with disabilities.

Once the ADA passed, congress looked to the NIH to lead the way in supporting and expanding the medical rehabilitation field and in coordinating rehabilitation research across federal agencies; the NIH looked to the NICHD because of its history of supporting and conducting research on disabilities.  On November 16, 1990, congress signed the legislation (P.L. 101-613) to establish the NCMRR within the NICHD.

The legislation that established the NCMRR also established the National Advisory Board on Medical Rehabilitation Research (NABMRR). The Board was charged with advising the Directors of NIH, NICHD, and NCMRR on matters and principles involving the NCMRR's programs and research. The Board was to include 12 members that represent health and scientific fields associated with medical rehabilitation, and six members representing people with disabilities. The NCMRR held its first NABMRR meeting in May 1991.

The NABMRR and members from the rehabilitation and the disability communities joined the NCMRR in defining research priorities that could help guide the Center's programs and activities. After much planning and collaboration, the NICHD published the Research Plan for the NCMRR (PDF - 223 KB) in 1993. The plan focused on the following interdisciplinary research priorities:

The research priorities continue to advance the science of medical rehabilitation and to help guide the NCMRR's activities.

A Conversation with the NCMRR Director

Dr. Michael Weinrich became the NCMRR director in February of 2000.  He was asked a few questions about the early years of the Center and his directorship.

Question: What was your highest priority when you first arrived at the NCMRR?

Dr. Weinrich: At the time, the highest priority was to expand the cadre of investigators interested in rehabilitation research. To do so required both training new young investigators and recruiting established investigators from allied fields.

Question: What was the biggest challenge you faced at that time?

Dr. Weinrich: The biggest challenge was getting people excited about the scientific opportunities in rehabilitation research. Once we began increasing the number of outstanding investigators, their progress was very reinforcing to the field.

Question: From your perspective, what were the advantages of establishing the NCMRR within the NICHD?

Dr. Weinrich: Biggest advantages are the expertise and experience offered by NICHD leadership in negotiating the NIH systems and the openness and receptivity of the Institute to the potential of rehabilitation research. During the period of the NIH doubling [in the early 2000s], the NCMRR grew at twice the rate of NICHD as a whole. This reflected the importance that the NICHD attached to the field of medical rehabilitation.

Question: What has been the biggest change you've seen in the rehabilitation field since the NCMRR was established?

Dr. Weinrich: The biggest change has been our understanding that the adult nervous system remains highly plastic and capable of change. Our ongoing challenge is to harness that plasticity to improve the repair and adaptation after injury to the nervous system.

Dr. Weinrich and other NCMRR staff will comment further on the developments and advances of the many research programs in the field of medical rehabilitation research in the next NICHD Spotlight.

Since its establishment, the NCMRR has actively supported research, trained investigators, and advanced the field of medical rehabilitation.  The Center currently includes several multidisciplinary research programs:

In addition, the NCMRR remains dedicated to training new investigators and to recruiting researchers and clinicians from allied fields into rehabilitation research.  As part of these efforts, the Center leads and takes part in multiple national career development efforts, including:

The NCMRR's first 20 years of work in medical rehabilitation research is just a beginning. With one in five Americans affected by some type of disability, and with an aging U.S. population, the need for basic, clinical, and translational advances in rehabilitation research is only going to increase. Because of the Center's work in supporting and coordinating research, and in training the next generation of investigators, the medical rehabilitation field now has a solid foundation of evidence on which to grow and build. The next NICHD Spotlight will focus on some of the Center's accomplishments and contributions to this evidence foundation.

The Foundation for the NIH will be hosting an anniversary symposium to celebrate the founding of the NCMRR. The event, December 13, 2011, will highlight current cutting-edge research efforts in medical rehabilitation and areas of rehabilitation that are ripe for advances. Speakers will also describe the significance and accomplishments of the NCMRR during its first 20 years. Among the invitees for this full-day symposium will be researchers and colleagues in rehabilitation research, current and former NABMRR members, and members of agencies, organizations, and associations with which the NCMRR works closely. Invitations will go out during the summer.