NICHD highlights efforts to advance minority health in Richmond, Va., and throughout the United States 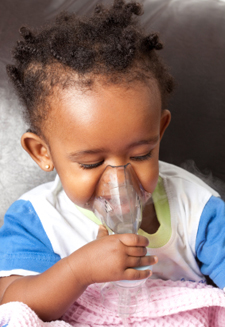 Asthma is a growing problem in the United States, especially in children. This condition causes the airways of the lungs to swell and narrow, leading to wheezing, shortness of breath, and coughing. Inhaling certain substances or doing certain activities can trigger asthma symptoms. Common asthma triggers include animals, dust, chemicals in the air or in food, exercise, mold, pollen, stress, tobacco smoke, and respiratory infections such as colds.

Among children, asthma is the leading cause of hospitalization and the most common chronic condition causing elementary school absences. Although asthma affects only 8.5% of children in the United States, its impact is felt most in the nation's minority communities. Compared with white children, asthma rates are higher among children who are Puerto Rican (2.4 times), African American (1.6 times), and American Indian/Alaska Native (1.3 times).

Asthma is not the only health condition or problem that affects minority communities more often than white communities. Rates of uterine fibroids, preterm birth, diabetes, and other health issues are higher among many in minority communities than in their white counterparts. National Minority Health Month, every April, refocuses attention on this important issue. The Month's activities, led by the Office of Minority Health at the U.S. Department of Health and Human Services (HHS) focus on achieving health equity and reducing health disparities—differences in health outcomes that are closely linked with social, economic, and environmental disadvantage. HHS has created an Action Plan to Reduce Ethnic and Racial Health Disparities (PDF - 1.0 MB) to help guide agency efforts related to health equity and minority health.

Understanding the biological and other issues related to health disparities, and developing and testing interventions to prevent or reduce their occurrence, are critical to the NICHD mission. The NICHD's research agenda drives research, advances, and outreach on topics crucial to minority health, including infant health, cardiovascular health, pregnancy outcomes, and the lifelong health of women. Select a link below to learn more.

Statistics show that Richmond has the highest rate of children's asthma in the country. According to the Asthma and Allergy Foundation of America (AAFA), a number of factors contribute to the challenges of living with asthma in Richmond. These include poor air quality, high amounts of pollen, lack of public smoking bans, and high rates of poverty along with lack of insurance. Based on an examination of these factors, AAFA has designated Richmond as the nation's "Asthma Capital" for 2 years running.

, and the NICHD will host a special meeting at Virginia Union University

in Richmond for parents of children with asthma. The meeting is part of the Asthma Prevention and Management Initiative (APMI), an AKA-NICHD collaboration created in 2011 to:

The APMI meeting also kicks off a series of education, training, and outreach activities that will be hosted by AKA chapters around the country to teach families about proper treatment and management of childhood asthma.

Speakers will highlight the goals of the APMI and describe its programs for children and families, with a focus on controlling asthma in the Richmond metropolitan area.

The Institute works closely with community leaders and organizations, such as AKA, that provide services and support for those communities to ensure that research and public health messages are appropriate and accepted.

Although the exact cause of Sudden Infant Death Syndrome (SIDS) is unknown, studies suggest that it results from a combination of factors. Because certain risk factors are difficult or impossible to change, many risk-reduction efforts focus on "external stressors"—things in an infant's environment that can affect SIDS risk. Changing or modifying an external stressor can eliminate it as a factor in the SIDS equation. Research conducted in the United States and throughout the world has shown that placing infants on their backs to sleep is associated with the lowest SIDS risk. Additional research showed that caregivers in minority communities, especially African American communities, were less likely to use the back sleep position for their infants. To address this situation the National Black Child Development Institute, AKA, Women in the NAACP, the National Coalition of 100 Black Women, and other organizations collaborated with the NICHD to design health education materials and messages that encouraged caregivers to place infants on their backs to sleep as a way to reduce the risk of SIDS. As part of this effort, the organizations conducted regional summits for their members and constituents in partnership with the NICHD as a way to get safe sleep messages into communities. For details on the summits, visit http://www.nichd.nih.gov/news/releases/Pages/detroit_summit.aspx, http://www.nichd.nih.gov/news/releases/Pages/reduce_sids.aspx, and http://www.nichd.nih.gov/news/releases/Pages/sids_risk.aspx.

Other NICHD research in American Indian/Alaska Native communities in the U.S. Northern Tier revealed that overheating and soft or loose bedding were much more common risk factors for SIDS among infants in these communities than was stomach sleeping. The NICHD worked with Elders from the Tribes in the U.S. Northern Tier and organizations that serve these areas to create a suite of materials and messages on ways to reduce the risk of SIDS in American Indian/Alaska Native communities. One of the main items in this suite of materials was published in 2011; visit http://www.nichd.nih.gov/news/resources/spotlight/Pages/110811-HNBP-workbook-packet.aspx for details. Additional items will be available later in 2012.

The NICHD also led an NIH-wide effort to bring the health information resources of the NIH to Jackson, Mississippi. On the Road to Better Health kiosk was launched at the Jackson Medical Mall, Thad Cochran Center, in partnership with the University of Mississippi Medical Center, Jackson State University, Tougaloo College, and other organizations including AKA, as a resource for patients and families. At the same time, the NICHD began the Mississippi SIDS African American Outreach Project to expand and improve coordination and delivery of SIDS risk-reduction information in the state of Mississippi. The Mississippi Department of Health, local organizations, churches, and community groups took part in this project. The Institute is in the process of initiating a similar project in Arkansas, which has one of the highest SIDS rates in the United States.

Jackson is also the site of a landmark study of cardiovascular disease in African American populations known as the Jackson Heart Study (JHS). The NICHD supports an offshoot of this research, called JHS Kids, that is focused on the children and grandchildren of the original JHS participants. This research will examine environmental and hereditary factors that may contribute to high rates of heart disease among African Americans. For more information, visit http://www.nichd.nih.gov/news/releases/Pages/110211-Jackson-heart-study.aspx.

The NICHD also leads and participates in similar efforts to understand why children of certain ethnicities start puberty earlier, weigh more, and are more likely to get injured.

The Institute also focuses on understanding why certain conditions and diseases are more common among women from minority communities. Data show that African American, Hispanic, and American Indian/Alaska Native women have higher rates of some gynecological disorders and of pregnancy and birth complications.

To examine such disparities, the NICHD leads multiple efforts—including large-scale clinical studies—to understand the factors that contribute to these statistics and to test interventions that could improve outcomes. For example, past research has shown that African American women are 3 to 4 times more likely than white women to develop uterine fibroids. To learn what might cause or contribute to this higher risk, the NICHD leads the NIH Fibroid Treatment Study and other research.

Similarly, African American woman are more likely to experience preterm birth, which contributes substantially to health disparities in infant mortality. Likewise, women whose first baby was born preterm are at high risk for subsequent preterm delivery. NICHD-sponsored research has shown that treating such high-risk women with the hormone progesterone can improve rates of full-term birth. That African American women benefit as much as white women from this treatment shows promise for using progesterone to help reduce the disparity in birth outcomes for African American infants. For more details, visit http://www.nichd.nih.gov/news/releases/Pages/121411-progesterone-metanalysis.aspx.

In light of statistics showing that Hispanic, African American, Pacific Islander, and Native American women are at greater risk of developing gestational diabetes than are white women, the NICHD is pursuing research to better diagnose, understand, and treat this complication of pregnancy. NICHD-funded studies have shown that even when it appears in its mildest form, treating gestational diabetes can decrease health risks for both mothers and their infants. Research has also shown that eating certain foods before becoming pregnant can decrease a woman's risk of developing gestational diabetes. For more information, visit http://www.nichd.nih.gov/news/releases/Pages/112109-gestational-diabetes.aspx and http://www.nichd.nih.gov/news/releases/Pages/012512-gestational-diabetes-risk.aspx.

The NICHD is also one of the NIH Institutes involved with the Consensus Development Conference on Diagnosing Gestational Diabetes Mellitus, to be held in October 2012. Visit https://consensus.nih.gov/2013/gdm.htm for more information on the conference.