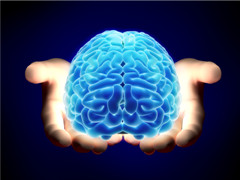 Albert Einstein did it. Author/poet Walt Whitman did it. Composer Nikolai Rimsky-Korsakov did it. Several celebrities in the United Kingdom have agreed to do it to further understanding of Alzheimer disease. And now several current and former players in the National Football League have pledged to do it to help understand head trauma. Most who have done it or who agree to do it cite their desire to help others, to prevent suffering, and to advance science.

What is "it"? Brain donation. Einstein, Whitman, and others donated or agreed to donate their brains to advance research on how the brain works and on different medical conditions. Brain and other tissues—especially from persons who have a specific condition—are invaluable to researchers in the quest to understand what happens both in the normal brain and in brains affected by various disease processes. The NICHD supports the Brain and Tissue Bank for Developmental Disabilities to help advance research on autism spectrum disorders, Down syndrome, and other intellectual and developmental disabilities.

The nature of brain and tissue donation makes it a troubling discussion topic. Because collections occur after someone has died—an impossibly difficult time for loved ones and family members—the issue is complicated and the need for sensitivity is critical. Myths and misunderstandings about donation also complicate matters. But the importance of this resource to help unlock the secrets of many disorders can’t be overstated.

"Families who donate to the bank make a generous and lasting contribution to other families," said Alan E. Guttmacher, M.D., Acting Director of the NICHD. "Their donation makes it possible for researchers to continue their efforts to gain greater understanding of these conditions and, ultimately, the means to prevent and treat them."

Within the context of scientific resources, the NICHD’S Brain and Tissue Bank for Developmental Disorders is unique—it is the world’s only dedicated pediatric repository for tissues from individuals with autism and other developmental and hereditary conditions. The Institute established the Bank in 1991 at the University of Maryland School of Medicine. Since then, the research team at the bank has collected more than 84,000 specimens from individuals with more than 400 different disorders, including autism, Down syndrome, and muscular dystrophy. More than 700 researchers have used more than 26,000 samples from the Bank since it was established. The University of Maryland School of Medicine recently won a $7.15-million contract to operate the facility for the NICHD for another five years.

The research team at the Bank works closely and carefully with medical examiners, hospitals, and patient advocacy groups to facilitate donations. With the influx of new resources to the Bank comes expanded capabilities, as well as expanded oversight.

The Bank has also instituted new procedures to improve its tissue-processing procedures and Web site. It will document and catalog—in greater detail—donors’ diagnoses and medical histories and will systematically measure and record the quality of the tissue. A new state-of-the-art Internet interface will also allow investigators to more effectively search for samples which may be of research interest.

"Although we have been collecting one-of-a-kind tissue samples for many years from a broad range of childhood disorders, these new resources provide for enhanced collection of samples from individuals with autism spectrum disorders." said the Bank’s director, H. Ronald Zielke, Ph.D.

The Bank is an important resource for autism research, having provided samples to 50 autism researchers, resulting in 62 published studies on the disorder

"In my own research to understand the brain connections in autism, specimens from the NICHD Bank have been extraordinarily valuable sources of new discoveries," said Eric Courchesne, Ph.D., professor of neuroscience and autism researcher at the University of California, San Diego.

The NICHD Brain and Tissue Bank for Developmental Disabilities relies on families committed to helping other families and individuals impacted by autism and intellectual and developmental disabilities, and on investigators committed to understanding, treating, and preventing these disorders. This unique resource will make a difference in the lives of millions of people not just for the next five years, but for decades to come.

For more information on the NICHD Brain and Tissue Bank for Developmental Disabilities, please visit the Bank’s Web site at https://www.medschool.umaryland.edu/BTBank/