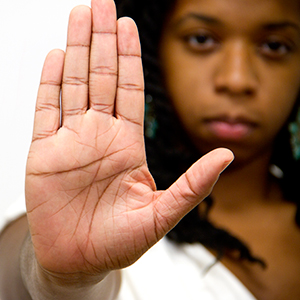 Violence is a leading cause of death for people 10 to 24 years old in the United States.1 In addition, nearly a million young people are treated for injuries each year as a result of physical violence, sexual assault, bullying, or self-harm.2 Youth violence also can cause long-term emotional and psychological harm.

Effects of early sexual abuse on health and well-being throughout life
Since 1987, NICHD has supported a study to learn more about the long-term impacts of sexual abuse in childhood. The study

found that girls who had been abused were more likely than their peers to have poor physical and mental health as adults.3 Many of the women in the study now have children of their own. A new NICHD grant

will allow researchers to look at the effects of abuse across generations and understand what makes some women more resilient than others.

The link between youth violence and susceptibility to disease in adulthood
Evidence indicates that children exposed to violent or traumatic events are more likely to have poor health as adults, but why is that the case? An NICHD-funded study is focusing on changes at the genetic level following early stressful events. Researchers will examine genes involved in stress and the immune system to identify a genomic signature of childhood violence.

. Girls who previously had been abused were more likely to engage in riskier online behaviors.4 But this and other previous studies relied on self-reporting by teens. A new grant from NICHD

allows the researchers to get a better picture of risky online behavior by following participants’ Internet footprints directly.

Better screening tools for targeting interventions to children at risk for violence
The best way to reduce youth violence is to prevent it before it starts, but it is difficult to predict which children are more likely to be violent or aggressive later in life. An NICHD grant is helping researchers develop a screening tool that ultimately could help identify children in elementary school at greatest need for intervention.

Environmental factors that increase risk for urban gun violence
Gun violence is the leading cause of death of African-American males between the ages of 10 and 24.1 NICHD-supported researchers identified risk factors for gun violence

by mapping the steps of gunshot victims on the day of their attack. The study, published earlier this year in Epidemiology, found that there were fewer cases of gunshot assaults in areas with greater neighborhood connectedness—where residents supported projects like neighborhood watches or block parties. The researchers also found that males who were alone, walked through areas with high levels of vacancies or vandalism, or recently purchased a gun, were at higher risk for gun violence.5

Efforts to improve health care in the ER for sexually assaulted teens
An NICHD-supported study examined how 38 pediatric emergency rooms (ERs) treated teenage victims of sexual assault. Researcher founds that less than half of the teens were tested for sexually transmitted infections

, such as chlamydia and gonorrhea. Only a third of the teens received preventive measures such as antibiotics and emergency contraception. The findings, published last December in the journal Pediatrics, show that ER care may fall short of treatment recommendations from the Centers for Disease Control and Prevention.6

Brain imaging to assess treatment for juvenile offenders
Why are some juvenile offenders rehabilitated by treatment programs while others relapse into violent or criminal behavior? Using magnetic resonance imaging of the brain, NICHD-supported researchers will look at how the brain changes as people in this group undergo a unique treatment program. The research aims to identify brain changes associated with outcomes, such as successful treatment or substance abuse and relapse, which could be used to inform and improve intervention programs.

NICHD remains dedicated to reducing the widespread problem of youth violence and will continue to support research on its causes and effects. The institute also is committed to studying ways to prevent youth violence and how best to treat those affected by it.