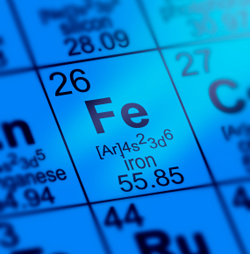 Iron is an essential nutrient for the basic health and functioning of the body. Without iron, oxygen is not delivered efficiently to cells, brain growth and development can be hampered, and the body struggles to maintain a strong immune system. Yet more than 2 billion people worldwide do not get enough iron, according to the World Health Organization (WHO)

In industrialized countries, the diagnosis of ID/IDA is relatively straightforward, requiring simple blood tests. But in resource-poor areas, where prevalence of ID/IDA is high, providing individual testing is often not technically or economically feasible. In these cases the approach has been universal iron supplementation—meaning everyone in a certain region received iron supplements regardless of their iron status to ensure the broadest coverage.

Universal iron supplementation would appear to be the best way to combat the effects of iron deficiency. But the solution is not as simple as it sounds, especially in areas where malaria and other infections are common. In these locations, iron supplementation can actually make malaria worse for those who were not iron deficient—especially for children who were not iron deficient. The parasite that causes malaria actually uses the iron to further its damage to the body. Thus, in areas where malaria is common, global researchers and public health practitioners are left trying to balance the risks of poor outcomes from iron deficiency with the risks and poor outcomes of malaria. Additionally, accurately measuring iron status is difficult in people with infection and inflammation. Therefore, the currently available tests for determining the presence of ID/IDA are problematic.

In 2007, the NICHD initiated the Iron and Malaria Project to examine the factors that affect the safety and effectiveness of interventions to prevent iron deficiency in the context of malaria and other infections. This 5-year project, a partnership between the NICHD, the Bill and Melinda Gates Foundation (BMGF), the WHO, the NIH Office of Dietary Supplements, and other organizations is funded primarily by the BMGF.

The Project’s Technical Working Group (TWG) was charged with examining all of the existing evidence and research on iron, malaria, iron supplementation, and related topics. The group’s findings would provide a starting point for a discussion of best practices for iron supplementation in areas where malaria is common.

The TWG recently released its initial report, Considerations for the Safe and Effective Use of Iron Interventions in Areas of Malaria Burden: Full Technical Report (PDF - 1.85 MB), and is already working on updates to the report information.

The TWG provides an in-depth review of the current scientific evidence on the following topics:

Members of the TWG are also working on updates to the report information to incorporate more recent research findings. The Project anticipates publishing a supplement to the initial report later in 2012.

The NICHD Iron and Malaria Project not only supports new research, but also efforts of the WHO and other global health organizations to develop evidence-based programs and policies related to iron within the context of women’s, infants’, and children’s health in the United States and globally.

For more information on research addressing safe iron supplementation in malaria-prone regions, select a link below: