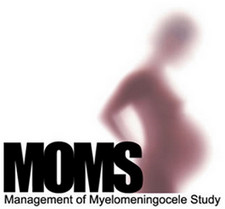 Spina bifida is a serious birth defect that affects about three to four out of every 10,000 live births in the United States. Spina bifida occurs when the spinal column—including the bones of the spine, muscles, and skin—does not develop or close completely around the spinal cord while a baby is growing in the womb.

The most common and severe form of spina bifida, called myelomeningocele, occurs when the spinal cord and nerves stick out through an opening in the spinal column. Infants born with myelomeningocele can experience paralysis, problems with nerve function, and a fluid buildup in their brains (called hydrocephalus), which can cause additional brain and nerve damage.

The encouraging results from MOMS, which included NICHD researchers working with colleagues at four institutions, were published online on February 9, 2011, in the New England Journal of Medicine. The researchers found better overall outcomes for those who got surgery while in the womb, compared to those who received the surgery after birth. You can read more about the results at Surgery on Fetus Reduces Complications of Spina Bifida.

The study was originally designed to include 200 pregnant mothers who were carrying a child with myelomeningocele. After only 183 women were enrolled, an independent data and safety monitoring committee recommended that the trial be stopped because it was clear that benefits of doing the prenatal surgery were greater than those from the traditional surgery after birth.

Even though the prenatal surgery has a number of benefits, it also carries significant risks. Prime among them is the increased chance of early delivery, which can cause multiple problems for the infant, including breathing difficulties. In addition, pregnant women who had the prenatal surgery were at greater risk for thinning at the prenatal surgery site in the uterus. This thinning increases the likelihood of uterine rupture or uterine dehiscence (incomplete tearing) of the uterus during a later pregnancy.

This research shows that prenatal surgery for myelomeningocele decreases some complications of the condition, but is also associated with risks to both the mom and the baby.