Meeting will review advances in treatment, testing, and other areas since 2000 PKU Consensus Statement 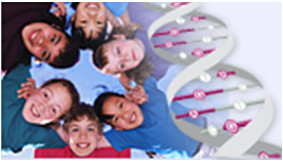 Phenylketonuria (PKU) is a rare genetic disorder that prevents the body from breaking down phenylalanine, an amino acid found in many proteins. As a result, phenylalanine can build up in body tissues of those with PKU and lead to intellectual disability.

Today, due in part to research supported by the NICHD, infants with PKU are identified by a routine blood test at birth and start a special, low-phenylalanine diet that prevents the harmful developmental effects of the disorder.

The PKU Scientific Review Conference: State of the Science and Future Research Needs meeting, February 22-23, 2012, builds on previous scientific advances and examines new research that continues to shape our understanding of the best strategies for detecting, treating, and managing PKU. The meeting is sponsored by the NICHD and the NIH Office of Rare Disease Research and Office of Dietary Supplements.

All those interested in PKU, PKU research, newborn screening, child development, and other topics are encouraged to attend this important meeting. Registration is free and open to all, especially:

In 2000, the NIH consensus development conference on PKU, sponsored by the NICHD and other agencies and organizations, released a statement that standardized screening and dietary recommendations for PKU. During the conference, an independent expert panel reviewed the evidence available at the time on such topics as how many people have PKU, the best diagnostic strategies for the disorder, the cost savings of early diagnosis and treatment, and the best strategies for lifelong disease management and identified future research needs. The panel’s full review is described in the Report of the NIH Consensus Development Conference on PKU: Screening and Management.

In the nearly 12 years that have followed the statement’s release, continued research has addressed additional aspects of the disease and has led to new treatments, new diagnostics, and a new understanding of PKU. The February 2012 meeting will review the 2000 guidelines in light of these new advances and help to provide updated evidence and guidance for patients, families, health care providers, and researchers involved in PKU.

Working groups comprising topic experts, members of the public, and federal representatives have been formed and are reviewing the current state of the science on different aspects of PKU. At the February meeting, the working groups will present their findings about the following areas of PKU treatment and research:

This conference continues the NICHD’s long tradition of advancing knowledge of PKU and improving the health of those with the disorder. Since its establishment, NICHD research has played a pivotal role in scientific advances related to PKU. In the late 1960s, researchers supported by the NICHD determined that the PKU blood test and dietary treatment regimen were effective and safe, even long term. As a result of this research, by the 1970s, every U.S. state began routine PKU testing at birth; today, infants born with PKU are diagnosed and begin treatment immediately, eliminating PKU as a cause of intellectual disability in the United States.

The success of PKU screening, diagnosis, and treatment also led to a new issue in PKU research: a dramatic increase in birth rates among women with PKU. Collaborative research initiated by the NICHD studied the effects of the low-phenylalanine diet before and during pregnancy on birth outcomes and infant health. Because of the study’s findings, women with PKU are advised to stay on their special diet throughout pregnancy to prevent problems such as stillbirth and low birth weight that can result from high phenylalanine levels.

After the upcoming PKU scientific review conference, the findings of the five working groups will become part of a final, collaborative publication on PKU. At the conference, attendees will get a sneak peek of the report’s content, which aims to kick off another decade of improved care and groundbreaking research on this difficult condition.

For more information on PKU or the conference, select one of the links below: